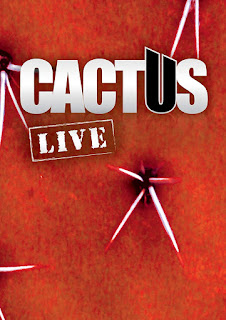 Life often doesn’t take us where we expect it to go. For bassist Tim Bogert and drummer Carmine Appice, after the break-up of their band Vanilla Fudge, they planned to form a Cream-styled supergroup with flash Yardbirds guitarist Jeff Beck. When Beck took his motorcycle over the edge – a serious accident that put the guitarslinger out of commission for nearly a year and a half – the instrumental duo instead hooked up with crunch-axeman Jim McCarty, from Mitch Ryder’s band, and gravel-throated vocalist Rusty Day from Ted Nugent’s Amboy Dukes outfit, to form the blooze-rock foursome Cactus.

Although the lifespan of Cactus was short (1969-1972) and commercially unremarkable (a couple of high-profile tours and an infamous performance at the Mar-Y-Sol Pop Festival in Puerto Rico did little to jumpstart album sales), subsequent praise from well-known fans such as Van Halen, King’s X, Monster Magnet, David Coverdale, and Kid Rock have turned Cactus into a bona fide ‘70s cult band. The subsequent limited-edition CD release of the band’s entire studio recordings and live performances on two double-disc sets has prompted a re-evaluation of the band once known as the “American Led Zeppelin.”

To be perfectly honest, there’s little that’s unique, or even overly original about the trademark Cactus sound – a high-energy, boogie-based, blooze-rock thunderstorm where the whole enchilada seldom rises above the talents of the separate ingredients. Masters of sonic ear-sludge, Cactus practically wrote the hard rock playbook that would later be followed by folks like Foghat, Fastway, and Montrose but, in truth, much of the band’s dubious provenance is provided by Day’s high-flying vocal gymnastics and the maestro-level chops of frontline players McCarty and Bogert. But while critics fretted and sweated over Cactus albums like the band’s eager self-titled debut or its potent follow-up, One Way...Or Another, wayward youth like the Reverend found the Cactus sound to be pure catnip to our chemically-altered teenage cerebellums nonetheless. 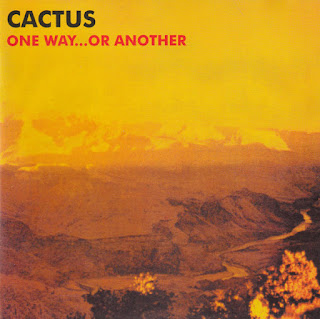 With all of the increased interest and activity swirling like a dervish ‘round the band’s meager four-album canon during the latter years of the century, the original pair of Bogert and Appice got back together with McCarty and began writing songs together again in 2001. Recruiting vocalist Jimmy Kune from the revolving door that is Britain’s Savoy Brown to replace the late Rusty Day, and bringing in mouth-harp tornado Randy Pratt, the reformed band debuted with Cactus V in 2006, a brand-new album with the same old booger-rock sound. The release of the new album led to a series of shows, including a June 2006 performance at the B.B. King Blues Club in New York City, a show that was captured on video for posterity and released on DVD by Music Video Distributors as Cactus Live.

The NYC performance kicks off with a bit of wicked riffing courtesy of McCarty before launching into a down-n-dirty rendition of Little Richard’s timeless “Long Tall Sally” that grinds and bumps nasty like your high school prom date. McCarty is one of the unsung geniuses of ‘60s/’70s hard rock, an explosive fretburner with pyrotechnics dancing from his fingertips. When Jimmy Mac takes off on one of his wiry leads, you feel the garrote tighten, and his mastery of the monster riff is second to none.

“One Way...Or Another,” one of the trademark tunes in the Cactus canon, is dedicated to the memory of Rusty Day, and the band smokes the song, hitting the target like 1,000 rounds from a fire-breathing Gatling gun. Kune’s vocals soar above the band’s metallic clash, but let’s establish right from ‘Jump Street’ that Jimmy Kune ain’t a mere Rusty Day clone, and we’ll admit that those are rather large lungs to fill. An old-school shouter with a solid pedigree, Kune’s vox don’t have the spicy bar-b-que twanginess of Day’s boozy drawl, but he belts out these tunes like an angry longshoreman anyway.

Another throwback from the band’s 1970 debut, “Bro Bill” is the kind ole-fashioned jackhammer shuffle that nicks more than its dinosaur-stomp melody from the Willie Dixon songbook. The song itself is some sort of anti-drugs screed, a death-n-reds fright-flick that enjoys an Eastside Chicago vibe, with McCarty tearing off fistfuls of hoary riff meat. One of the new tunes from Cactus V, “Muscle And Soul” opens with a tasty old-school riff before tossing the listener back to ’72 with a sound that evokes memories of smoldering stacks o’ wax from fellow travelers like Status Quo and Mountain. Much of the song’s instrumentation was plagiarized by the band from its own catalog, which in turn “found” a large chunk of its own underground sonic dynamism from the Yardbirds, Zeppelin and Cream (by way of Howlin’ Wolf).

“Oleo,” also from the Cactus debut, basically serves as a spotlight for a Tim Bogert bass solo. Bogert is a rarity, a true hard rock bassist born-and-bred, and he single-handedly invented the bass-heavy bottom end sound during his Vanilla Fudge daze, back when the hippies were still chasing butterflies. A lot of rock bassists of the modern era – many who have subsequently mimicked the Bogert sound – looked no further than Sabbath’s Geezer Butler or Deep Purple’s Roger Glover for inspiration or, worse yet, pursued some nancy-boy jazz training. Bogert remains underrated and a true spectacle to watch, beginning his four-string rumble with a low-tuned growl that sounds like a pack of rabid ridgebacks. Then he flies into a thrashy, blistering display of talent that soars and dives like some demented bird of prey. 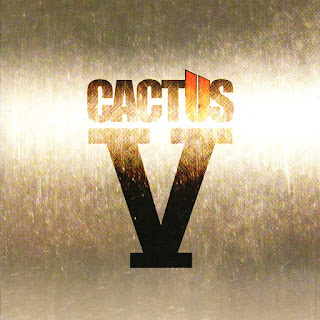 The Cactus version of Howlin’ Wolf’s “Evil” remains the definitive version of the classic stalker (save for the master’s original, natch). On Cactus Live, the band takes the song on a breathtaking high-speed run on a Hellbound train with a performance that is as sweet as a voodoo queen’s kiss and as surprisingly powerful as a dynamite suppository. The song leads into the obligatory ‘70s-style drum solo, and Carmine Appice does not disappoint those who enjoy this sort of percussive excess. Appice is anything but a subtle drummer, and any technical superiority that he once possessed has long since fled for higher ground. The collateral damage that he heaps upon his kit is entirely appropriate for the band’s ballistic approach to the blooze-rock idiom, however.

“Cactus Boogie,” another new tune from Cactus V, sinks deeper into the booger-rock mire, a veritable tar pit of big riffage and bigger rhythms. These guys come by the boogie honestly, attending the J.L. Hooker School of Architecture, and with this rambler they erect the kind of funky free-for-all that went out of fashion with the birth of punk, but never fell out of favor with the stoners, heshers and other low-hanging fruit of music fandom (including this humble scribe). There really ain’t much to the song, and little thought went into the lyrical poetry, but the song stomps-and-stammers along anyway, howling like the enraged beast that it is.

Another landmark from the band’s distant past, “Parchman Farm,” although credited to blues/jazz giant Mose Allison, is really a story older than the dirt of the Mississippi Delta. A scorched-earth, fire-and-brimstone, guitar-driven rocker, the moans and wails of McCarty’s six-string work echo the misery of the prison’s occupants, the infamous work farm itself the inspiration for a score of blues tunes. Randy Pratt’s harp choogles along like a freight train, while an extended jam be-tween Mac and Bogie steam and char the paint from B.B. King’s walls. Cactus Live closes with a notable encore, another Cactus trademark tune, “Rock N Roll Children,” a funky rhythmic orgy of mud wrestling with an undeniable boogie-beat and Kune’s best strangled gutter-tramp vocals.

While the band’s performance is solid and, at times, spectacular on Cactus Live, from a technical perspective the film gets a solid ‘B’ from this critic, a moderate thumb’s up with a few issues. The camera work is excellent overall, the multiple-cam rig capturing several good angles. With the exception of Kune’s mug being washed out with bright white light a time or two often, the lighting is usually pretty good, and the picture is often crystal clear. Although the live sound is quite listenable, a notch, perhaps, below studio-CD quality, spoken word segments are out-of-sync at times, resulting in an unnerving kung-fu flick sensation. The editing is razor-sharp, though, including both full and widescreen shots, as well as some uber-cool slo-mo time-capture segments and groovy split-screen effects that showcase the individual band members.

To fully understand the lasting appeal of Cactus, one has to look back at the breeding ground that spawned such a Frankenstein hybrid of psychedelic blues and soul-drenched booger-rock. If Bogert and Appice were the heart of the band’s sound, Day and McCarty were the band’s soul. Together, the foursome broke out of the boiling cauldron that was the old, industrial Detroit – after the riots, but before the Motor City’s fall from grace and rapid descent into darkness. This was back when bands like the Stooges, the MC5, SRC, Third Power, the Amboy Dukes, and others roamed the city streets, rewriting the rock ‘n’ roll rule book with a sound as strong and deadly as the factory killing floor.

If nostalgia for the era is largely what drives the growing popularity of ‘70s-era bands, one can’t fault Cactus for trying to recapture their former infamy. It doesn’t hurt that the performances on Cactus Live raise a joyful noise in an entirely appropriate, noisy Motor City way; not for nothing does Jimmy Kune wear a Creem magazine t-shirt through the show. Spiritually and sonically, the new Cactus shares common ground with its predecessor. Life doesn’t always take us where we expect to go, and it’s unlikely that McCarty, Bogert and Appice expected to be playing old Cactus tunes 30+ years after the band’s flame-out. But as my dear old departed Grandpa used to say, “that’s some real poop-punting music!” Boy howdy! (Music Video Distributors, released December 11, 2007)