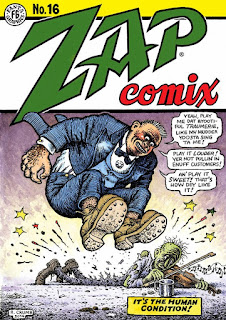 When the Reverend was a wee teen back in the dark ages of the early ‘70s, I was enamored of underground comix. I had been raised on a steady diet of Marvel and DC superheroes (Daredevil, Black Panther, The Avengers, and Batman) during my single-digit years, so it wasn’t such a large leap to dive headfirst into characters like Mr. Natural, the Checkered Demon, and the Fabulous Furry Freak Brothers. The day that I discovered Zap Comix is the day that my life took a left turn into a surrealist anti-authoritarianism that I’ve dragged with me well into (late) middle age.

After seeing an advertisement in the back of an issue looking for people to sell comix, I contacted all the major underground publishers and soon became Nashville’s resident “college sales rep” for The Print Mint, Last Gasp, and Rip Off Press. I fed my own growing comix addiction by placing new issues on consignment at Hillsboro Village head shops near Vanderbilt University, using the profits to pay for my own comix. It was a pretty good gig for a year or so as the publishers were cranking out new issues at a prolific rate. About the time that I graduated from high school in 1975, the bottom fell out of the underground comix biz and I drifted into other hustles (like writing…).

Zap Comix was the granddaddy of all undergrounds, the ground-breaking, earth-shaking first shot across the bow that proved that comix were a legit art form, and funny books were not just for kids anymore. Artist/writer Robert Crumb published Zap #1 in 1968, selling copies out of a baby buggy on the streets of San Francisco. The success of the first issue led to Crumb enlisting a number of talented friends to contribute to the second issue. Thus was the Zap collective created – ringleader Crumb along with artists S. Clay Wilson, Spain Rodriguez, Gilbert Shelton, Robert Williams, Victor Moscoso, and Rick Griffin – all of whom would be responsible for creating and carrying Zap Comix into the new millennium.

Through the decades, new issues of Zap Comix would appear more sporadically, often at three-to-five-year intervals between issues, some seven years elapsing between issues fourteen and fifteen. Griffen died in 1991, and artist Paul Mavrides was added to the team when Crumb announced that he no longer wanted to do Zap. The revolutionary publication was honored in December 2014 when a deluxe box set collecting all seventeen issues of Zap Comix was published by Fantagraphics Books. A previously unpublished final issue – Zap Comix No. 16 – was included in the box set as a bonus, and has since been published as a stand-alone graphic novel with fetching Robert Crumb cover art.

Unable to cough up nearly $500 for The Complete Zap Comix Box Set, it was with great anticipation that I ordered up a copy of Zap Comix No. 16. Since I’d owned and/or read virtually the entire run of the publication, I knew that the zine could be spotty and inconsistent – Victor Moscoso’s work generally bored me, and S. Clay Wilson’s shotgun approach to pen ‘n’ ink hits the target as often as it misses – but nothing could have prepared me for the mess that is Zap Comix No. 16. The first issue to include material from all eight Zap artist between two covers, it should have been glorious, but the results often make one wish that some of these guys had retired earlier. 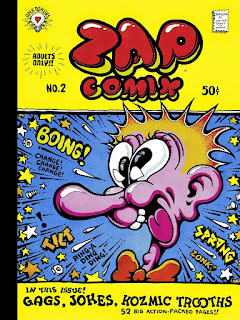 First on the chopping block is Crumb, who readily admits that he’s out of practice on these strips drawn in 2003 and 2004, and it certainly looks it (the book’s cover, drawn in 2014, is a fine return to form, however). Although Crumb’s storytelling skills remain intact, his art here is crude and hesitant, lacking his characteristic energy and on-page charisma. Sneaking his wife Aline Kominsky-Crumb into the book as its first female artist is less subversive than it is lazy, a way to flesh out autobiographical stories with her flat, unattractive, one-dimensional artwork shoehorned into the panels. I have nothing again distaff artists, but if Crumb wanted to include a woman’s work in this final Zap in order to combat the book’s often-criticized misogyny, perhaps he could have found somebody other than his wife, who jokes that she’s the “Yoko Ono” of underground comix.

Worse yet are S. Clay Wilson’s contributions to this final issue of Zap Comix. Wilson’s long-running characters like the Checkered Demon and Captain Pissgums were seldom the epitome of subtlety, drawn in a rude and crude B&W style that matched Wilson’s raw but spellbinding storytelling. But the strips here, dated 2006, 2007, and 2009, showcase a significant deterioration of the man’s skills. Wilson suffered severe brain trauma in a 2008 accident, and he has been plagued with health issues since that have left him unable to draw. His 2009 efforts, though, are just bad; simplistic and uglier than normal. One guesses that they were included in order to generate some royalties for the tragically sidelined artist.

This is not to say that all of Zap Comix No. 16 is bad, as there are a few gems to be found among the sludge. Spain Rodriguez’s stories feature the sort of dense, detailed art and gritty storytelling that he’s long been known for, and his tales of the Road Vultures Motorcycle Club are always welcome. Disturbingly, though, Rodriguez’s art is cluttered with un-erased pencil lines for some reason, and faces in some panels were left inexplicitly un-inked. The final Wonder Warthog story by the legendary Gilbert Shelton is one of the book’s color sections and it’s a real hoot, as is Crumb’s four-color “The Unbearable Tediousness of Being,” which displays a spark of his talent. Shelton’s Furry Freak Brothers story – “Phineas Becomes A Suicide Bomber” – was inked by the artist for the deluxe box set but this version was inked by Paul Mavrides. Either way, it’s a classic Freak Brothers farce with the ever-serious Phineas, as always, as the fool.

Overall, I’d have to say that Zap Comix No. 16 is a mediocre collection that might have been so much more. Perhaps his own less-than-stellar work is what caused Crumb to shelf the issue in the first place, and maybe it’s merely the last gasp from a formerly revolutionary group of artists and writers that have long since been eclipsed by the subsequent generations they influenced and inspired to pick up pen and ink.

The trade paperback format is perfect for this sort of collection, and I’d love to see Fantagraphics publish the other fifteen issues of Zap in similar graphic novel form (three or four issues per book) for those of us who can’t cough up half-a-yard for the limited-edition box set. Considering the uninspired mix of material found in Zap Comix No. 16, I can only recommend the book for hardcore comix collectors. The rest of you should instead dig up some of the early issues to find out why Crumb called his Zap brethren “the baddest gang of cartoonists ever to wield their crow quills together.” Grade: C (Fantagraphics Book, published February 22, 2016)