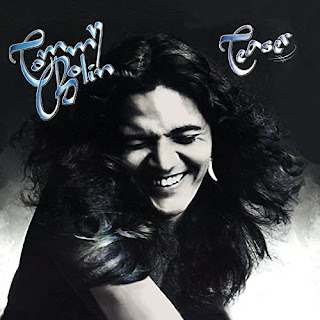 Six-string wunderkind Tommy Bolin made his bones as a teenager playing with the blues-rock band Zephyr in Boulder, Colorado. Although he provided his stellar fretwork to that band’s self-titled 1969 debut album (Bolin was only 18), his restless muse prompted the guitarist to leave the band shortly after the release of their 1971 album, Going Back To Colorado.

When it came time for Bolin to record his first solo album, 1975’s Teaser, it was only natural that he’d infuse the performances with elements of all of his disparate musical influences – hard rock, blues, jazz fusion – with the results varying entirely on your taste for what Tommy was dishing up. Recorded just prior to working on Deep Purple’s Come Taste the Band, Teaser is, first and foremost, a showcase for Bolin’s unique steel-string pyrotechnics. As such, it’s a somewhat schizo affair, with the guitarist often changing stylistic directions even within a song with whiplash accuracy.

Still, Teaser is an entertaining, if uneven, collection of period rock ‘n’ roll. Album opener “The Grind” is a boogie-flecked barrelhouse rocker with backing vocal harmonies, rollicking instrumentation, and an overall ‘70s era musical sound and feel. By contrast, “Homeward Strut” masterfully blends a hard rock soundtrack with funky rhythms and a little jazzy swagger to create a lively instrumental with definite New Orleans vibes. “Dreamer” skews a little too far into Elton John territory for my taste, probably due to David Foster’s wimpy piano playing while “Savannah Woman,” with its rhythmic Latin undercurrent, is a ‘yacht rock’ attempt at making the charts better left to folks like Toto (whose Jeff Porcaro plays drums on nearly every song on Teaser EXCEPT “Savannah Woman,” where the stool is occupied by the Tubes’ Prairie Prince).

Thankfully, the album’s title track mainlines some steroids with a hard rock soundtrack upon which Bolin embroiders his fluid, razor-sharp guitarplay. The soulful “People, People” displays Bolin’s emotional, albeit under-powered vocals, the guitarist bringing in a bunch of jazz dogs like synth wizard Jan Hammer and saxophonist Dave Sanborn to brass up the arrangement, which offers only the slightest of six-string shadings. Bolin dives into the depths of jazz fusion with “Marching Powder,” which brings in drummer Michael Waldon alongside Hammer and Sanborn for a cacophonic instrumental that wouldn’t have been out-of-place on a Cobham or Mouzon LP. Although the closer “Lotus” starts out deceptively soft and kinda mushy, it soon powers up with a soaring guitar solo before veering off again into more pastoral acoustic guitar strum and then exploding once more with switchblade flash.

Much like the entirety of Tommy Bolin’s too-short career (he would O.D. the following year after the release of his sophomore effort, Private Eyes), the guitarist’s debut album couldn’t figure out what direction it wanted to go, so instead it veered all over the road. It makes for a thrilling, if somewhat unsatisfying ride, but I’d still recommend either of Bolin’s solo albums for listeners looking for a challenging perspective on guitar rock. (Nemporer Records, 1975)