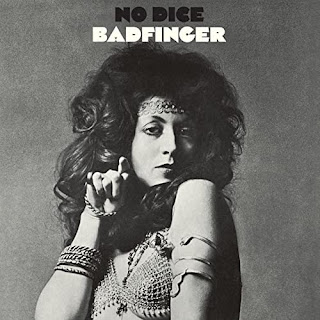 Widely-considered as the “Godfathers of Power-Pop,” Badfinger’s storied career dated back to the early 1960s. Formed in 1961, the band ran through names like the Black Velvets and the Wild Ones before settling on the Iveys. A typical British R&B outfit, the Iveys played Top 40 chart hits, Motown, psychedelic-rock, blues, and soul while touring with better-known outfits like the Who, the Yardbirds, and the Spencer Davis Group. They would come to the attention of the Beatles and, signed to that band’s Apple Records label, would change their name and start the long slog of moving out of the long shadow of their benefactors.

No Dice was the second album recorded under the Badfinger band name and features the “classic” line-up of guitarists Pete Ham and Joey Molland, bassist Tom Evans, and drummer Mike Gibbins, all of whom share vocals at one time or another. It’s an odd album, and not what fans might expect, in spite of the power-pop blueprint “No Matter What,” an engaging slice of guitar-driven chart candy that would become the band’s second Top 10 U.K. and U.S. single. Although a lot of the album’s exercises in rock ‘n’ roll reflect the uncertainty of the changing decades (as well as upheaval in the Beatles camp and Apple Records), there are a number of gems hidden in these grooves.

The Ham/Evans co-write “Without You” would become a big hit for Harry Nilsson a year after Badfinger’s hauntingly beautiful and sublime version. The rollicking, country-tinged “Better Days” offers up some stellar fretwork and harmony vocals while the rockin’ “Love Me Do” one-ups the Beatles with a stomping ‘50s throwback soundtrack. Evans’ “Believe Me” is a Paul McCartney solo track by any standard with plaintive, yearning vocals and lush instrumental accompaniment and “We’re For the Dark” closes No Dice with an elegant folk-pop tune boasting of elegant guitarplay and Ham’s warm vocals. Oddly enough, only “No Matter What” was released as a single off the album, although there are easily a couple of other worthy candidates here.

Badfinger peaked commercially with the band’s 1971 album Straight Up, which would ride the Top 10 U.S. hits “Day After Day” and “Baby Blue” to a #31 position on the Billboard albums chart. Financial mismanagement, personnel changes, the demise of Apple Records, numerous lawsuits, and other issues plagued the band until its break-up in 1975 following the death of Pete Ham by suicide. Broker than broke, Badfinger members Molland and Evans re-formed the band in the late ‘70s and released albums in 1979 (Airwaves) and 1981 (Say No More) before breaking up again, each man touring with their own version of Badfinger in the early ‘80s. Despondent over an argument concerning royalties, Evans took his own life in 1983. Joey Molland continued to lead Badfinger, in one form or another, into the 2000s while also releasing several solo albums. (Apple Records, 1970)

Buy the CD from Amazon.com: Badfinger’s No Dice