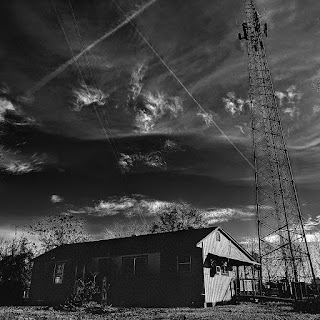 Peter Case – The Midnight Broadcast (Bandaloop Records)
Singer/songwriter Peter Case is a walking contradiction – he’s a rocker, a folkie, a bluesman, and a power-pop pioneer! Over the course of an acclaimed career spanning five decades, Case has created an unassailable body of work largely by defying expectations and following his restless muse. The stunning The Midnight Broadcast stands apart from the crowd, however…a concept album, of sorts, the performances here recreate the sort of late-night, static-ridden, AM radio broadcast one used to hear on clear-channel stations like Nashville’s WLAC while driving cross-country. As such, Case pursues a rich American musical menu that places songs like the lovely folk-pop ballad “Just Hanging On,” which wears its pastoral piano and strings like a comforting cape, alongside obscure covers like Dylan’s country-blues gem “Early Roman Kings” or Sleepy John Estes’ “Oh the Morning/President Kennedy,” delivered as a reverent Gospel-tinged blues dirge. The Band’s “This Wheel’s On Fire” is reinvented as a sort of Delta blues ballad while the great Memphis Minnie’s “Bumble Bee” is an electrifying showcase of Case’s six-string skills. In this digital day and age, The Midnight Broadcast sounds like a station from another planet, but there’s a lot to like here for the folk, blues, or Peter Case fan. Grade: A   BUY! 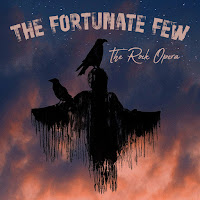 The Fortunate Few – The Fortunate Few: The Rock Opera (9 Dog Records)
The “rock opera” was the foundation on which 1970s-era prog-rock was built. Although the concept album has long since fallen out of favor with the instant-gratification generation, it still comes out of hiding now and then to deliver a magical musical experience. Such is the case with the Fortunate Few’s The Rock Opera. The creation of Nashville rock scene veteran Price Jones, who wrote and produced the album and enlisted a talented band (including the stellar talents of guitarist Stan Lassiter), The Rock Opera is a Phillip K. Dick-worthy cyberpunk tale of a future where children are a consumer commodity, designed in a lab on spec. Following the protagonist, Jonnie, from conception to her teenage years, the song-cycle provides an analogy not only for reckless adoption but also for angst and alienation. Musically, The Rock Opera is more rock than prog, with Lassiter’s imaginative fretwork a welcome addition to the narrative. Notably, Jones doesn’t sing these songs (although she’s a great vocalist), relying primarily on the talented Ryan Greenawalt and Talisha Holmes for the main male and female characters, respectively. Holmes, in particular, is an incredible find, but the entire band breathes life and energy into Jones’ heady conceptual masterpiece. Grade: A   BUY DIRECT! 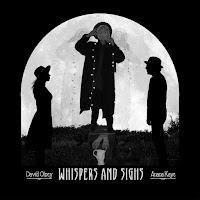 David Olney & Anana Kaye – Whispers and Sighs (Schoolkids Records)
Legendary Nashville singer/songwriter David Olney left this mortal veil a little more than a year ago, leaving behind a musical legacy of better than two-dozen recordings that displayed his enormous skills as a wordsmith and underrated compositional talents. The posthumous Whispers and Sighs is Olney’s swansong, and a hell of a goodbye at that. Recorded in collaboration with young singer/songwriter Anana Kaye and her musician husband Irakli Gabriel, accompanied by Olney’s usual group of talented friends, Whispers and Sighs is a wonderful showcase for Olney’s erudite lyricism and eclectic instrumental sensitivities. Olney’s sonorous voice is balanced nicely by Kaye’s dulcet tones, and the band delivers on Olney’s artistic vision, from the baroque “My Favorite Goodbye” and the fierce folk-rock of “Lie To Me, Angel” to the charming “Why Can’t We Get This Right?” and the rocking “Last Days of Rome.” With the mesmerizing “The Great Manzini (Disappearing Act),” Olney passes the torch onto the next generation much as he took the mantle on from Townes Van Zandt. The song revels in nostalgia, a poetic ode to love and loss and memories, written and sung by a master. Whispers and Sighs cements Olney’s legacy as a songwriter and artist without peer. Grade: A+   BUY! 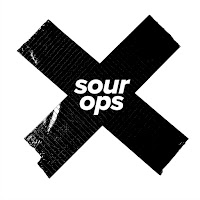 Sour Ops – X (Feralette Media)
Gonzo sonic sculptors spray-painting your eardrums with joyous noise, Sour Ops roar out of Nashville with X, their sophomore effort. Imagine Cheap Trick on a diet of gamma radiation and razorblade flapjacks, or the love child of Iggy Pop and Paul Westerberg, and you’ll have Sour Ops’ musical blueprint. Clocking in at roughly 30-minutes of scalpel-sharp, pulse-quickening git-rock, songs like the clattering “There She Goes,” which pairs a rough-grit sandpaper groove with stinging, chiming fretwork, or the power-pop gem “I’m An Animal Too” shudder out of your stereo speakers like a cold wind. The muscular “Contagious” offers tight-as-a-fist rhythms and snotty. punkish vocals while “I Want You Around” is a twangy country-rocker with weepy pedal steel (and better than anything Music Row will release this year). “Out of Place” is a reckless basher with explosive drumbeats, throbbing bass lines, altered melodic vox, and livewire guitar. Every song here crackles with arcane energy and reverence for the holy trinity of Chuck, Bo, and Elvis as brothers Price and Mark Harrison and fellow travelers Tony Frost and George Lilly revel in a Bacchanalian feast of music-making. Gleefully imposing electro-shock rock ‘n’ roll therapy for your soul, X marks the spot! Grade: A+   BUY DIRECT! 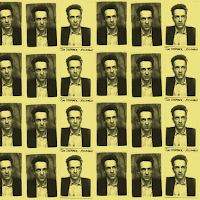 Joe Strummer – Assembly (Dark Horse Records)
Resurrected by his son Dhani, the first new release by George Harrison’s Dark Horse Records is this Joe Strummer collection, Assembly. Strummer performed and recorded with a number of bands after the Clash’s break-up, including the Mescaleros and the Pogues, and also put hours of solo performances down on tape. Assembly could have easily been twice the length and not scratched the depth of the man’s enormous talents, but the album’s 16 tracks cover a lot of ground nonetheless, from familiar tunes like the Mescaleros’ “Coma Girl” and “X-Ray Style” to previously-unreleased live versions of “Junco Partner (Acoustic),” “I Fought the Law” and “Rudie Can’t Fail.” To be entirely honest, however, I prefer the 2018 release Joe Strummer 001, which was overseen by Strummer’s widow and offers two discs crammed with material, 32 songs in total, including a dozen previously-unreleased tracks, music from the 101ers, the Mescaleros, Latino Rockabilly War, and the Pogues, as well as movie soundtrack work and solo recordings. There’s a bit of overlap between Assembly and Joe Strummer 001, so while I’d recommend the double-disc set, Assembly may be worth buying if only for the three unreleased songs (depending on your level of rabid Strummer fandom). Grade: B+   BUY! 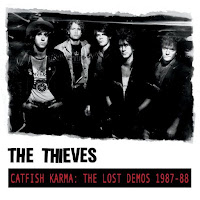 The Thieves – Catfish Karma: The Lost Demos 1987-88 (Rambler Records)
Nashville boasted of a number of great bands during the 1980s but none, perhaps, were as overlooked and undervalued as the Thieves. Comprised of singer/songwriter Gwil Owen, guitarist Bart Weilburg, bassist Kelley Looney, and drummer Jeff Finlin, the Thieves had one foot in rock ‘n’ roll and the other in the Music City’s honky-tonk sound years before such blending of genres was called “Americana.” The band’s 1989 semi-indie release, the Marshall Crenshaw-produced Seduced By Money, is a gem waiting to be rediscovered by the hipster crowd; Catfish Karma is a compilation released by Owen and consisting of the band’s early demo recordings. Featuring only four tracks that made their way onto Seduced By Money, the new disc stands well on its own. Holdovers like the Dylan-esque “From A Motel 6” or the rockabilly-tinged “Pick A Number” are rawer and, if memory serves, edgier than the album versions, but unreleased tracks like the melodic “The Night Gives Me Strength,” which veers onto power-pop turf, or the funky, strutting “Rabbit Town,” with shimmering guitar, display the band’s enormous talents and creative vision. My fave? “The Hard Way,” a fierce slab o’ rust-belt rawk that sounds like Nashville’s version of the Iron City Houserockers. Grade: A   BUY DIRECT!