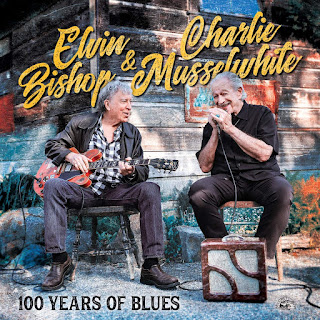 Elvin Bishop & Charlie Musselwhite – 100 Years of Blues (Alligator Records)
Guitar maestro Elvin Bishop and harp wizard Charlie Musselwhite are both bona fide blues legends, and it’s a cryin’ shame that they’ve never made an album together until now. This pairing of two beloved bluesmen, both masters of their craft, is as much of a sure thing as you’ll find in these sorry times, and 100 Years of Blues doesn’t disappoint. The duo’s blending of blues and roots-rock goes down like honey mead, ol’ Charlie handling the heavy lifting on the hardcore blues tunes with his soulful vocals and fluid harmonica-play while ol’ Elvin tackles the humorous material with his usual aplomb, peppering every performance with gut-wrenching tone and texture. For instance, “Birds of A Feather” is an old-school blues jam with plenty of harmonica and guitar boogie; the pointed topical lyrics of “What the Hell” are delivered with Bishop’s slyly disarming vocals and Musselwhite’s instrumental counterpoint; and the instrumental “South Side Slide” gives both musicians a chance to shine while transporting the listener back to Chicago circa 1966. Much like Musselwhite’s recent recordings with Ben Harper, the collaboration of these two seasoned blues veterans makes sense, and if you dig either artist, you’re gonna love 100 Years of Blues! Grade: A   BUY! 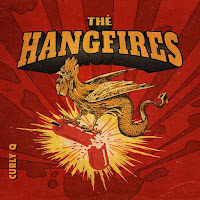 The Hangfires – Curly Q (Underground Treehouse Records)
Former Georgia Satellite Dan Baird has played with fellow-traveler Joe Blanton in the Bluefields for a few years, developing an impressive musical chemistry and songwriting shorthand that reveals itself in the grooves of Curly Q. A Covid-quarantine project, the Hangfires is a studio amalgam featuring Baird and Blanton on guitars and vocals, with keyboardist Jen Gunderman and drummer Greg Morrow, all four recording remotely and swapping files online. The result is unbelievably cohesive, the talented foursome making a near-seamless album of joyful noise that blends the twang ‘n’ bang of the Bluefields with the Keef-inspired throwback sound of the Satellites. Unbridled rockers like “The Good Part” or “Mama Thinks I’m Alright” provide the cheap thrills we need in these dark times, with zealous vox and stinging six-strings, while the slower-paced “Wild Imagination” blends soulful vocals with lush instrumentation, slashing fretwork, and thoughtful lyrics. Not just another bunch o’ guitar-happy rawkers, the Hangfires bring hard-won wisdom and intelligence to their lyrics to go alongside their raucous musical soundtrack. R.I.Y.L. The Georgia Satellite, Jason & the Scorchers, Drivin’ ‘N’ Cryin’ Grade: A   BUY! 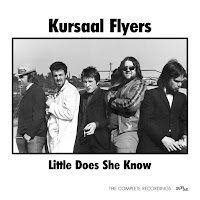 Kursaal Flyers – Little Does She Know (RPM Records, U.K.)
Pub-rock, that uniquely British sound, never grabbed more than a cult following stateside, with Brinsley Schwarz, Ducks Deluxe, and Dr. Feelgood getting all the love. But Southend’s Kursaal Flyers were one of the better bands of the era, as proved by Little Does She Know, a four-disc, career-spanning box. Including three studio and a live album circa 1975-77, plus the band’s 1988 reunion LP, the set throws in another seventeen bonus tracks, including live performances, that showcase the Flyers’ inspired blend of roots-rock, power-pop, and British R&B that was incredibly progressive at the time. The band’s guitarist, Graeme Douglas, would go onto success with Eddie & the Hot Rods, singer Paul Shuttleworth found solo success, and drummer Will Birch formed world-beating power-poppers the Records before becoming an esteemed music journalist. Pub-rock built the foundation for the punk-rock kiddies of ’77 before melting into obscurity, but the Kursaal’s timeless sound still echoes across the ages. Grade: A   BUY! 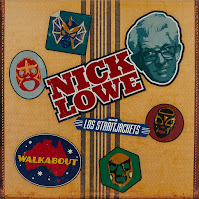 Nick Lowe & Los Straitjackets – Walkabout (Yep Roc Records)
On paper, the pairing of British rock legend Nick Lowe with Mexican wrestling mask-clad American rockers Los Straitjackets seems an odd couple but, in practice, it’s a match made in heaven. The guys in Los Straitjackets have the instrumental chops to capture the nuance and elegance of Lowe’s songs and, with a rock-solid band playing behind him, ol’ Nick can climb out on a limb now and then. Walkabout is a compilation album originally only released in Australia, collecting songs from Lowe’s recent EPs with the Straitjackets, including the swinging, jazz-tinged rockabilly swing of “Tokyo Bay” and a soulful cover of the Bee Gees’ “Heartbreaker.” Los Straitjackets strut their stuff with instrumental surf-rock covers of Lowe gems like “Half A Boy and Half A Man” and “(What’s So Funny ‘Bout) Peace, Love and Understanding.” A previously-unreleased live version of Nick’s “Heart of the City” closes out Walkabout with a bang! Grade: A   BUY! 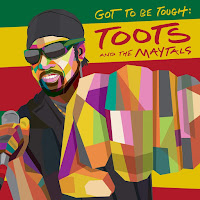 Toots & the Maytals – Got To Be Tough (Trojan Jamaica)
Reggae legend Toots Hibbert passed away in September from that damned Covid, but he left us one helluva parting gift. Got To Be Tough is the first Toots & the Maytals album in a decade, but it’s an uncompromising, tough-as-nails collection of roots, rock, and soul that will make your speakers smile in ecstasy. Even at 77, Hibbert’s rough-hewn vocals have diminished little in power or subtlety, and his original songs showcase his underrated songwriting ability. “Drop Off Head” is a chainsaw rocker and the defiant “Just Brutal” matches hurricane-strength vocals with sassy horns and socially-conscious lyrics. The title track is a masterpiece of roots-reggae with empowering lyrics while the haunting “Stand Accuse” displays Toots’ ability to mix strength and vulnerability in a single verse. Produced with a deft hand by Zak Starkey (Ringo’s son), who also contributes musically alongside some of Jamaica’s most talented, Got To Be Tough is a fitting coda to an amazing career that spanned six decades. R.I.P. Mr. Hibbert. Grade: A+   BUY! 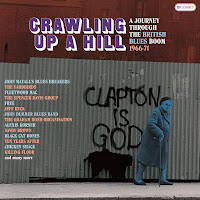 Various Artists – Crawling Up A Hill (Grapefruit Records, U.K.)
Thanks to the good folks at Grapefruit Records, you can now do a deep-dive into the British blues boom circa 1966-1971 with Crawling Up A Hill. The three-disc, clamshell-boxed, 56-song collection offers plenty of the usual suspects – John Mayall’s Bluesbreakers, The Yardbirds, Fleetwood Mac, Ten Years After, Alexis Korner, Free, Taste (w/Rory Gallagher), Status Quo, and Savoy Brown – among its wealth of entries. It’s between these grooves that the set really shines, Grapefruit plucking jewels from the lesser-known likes of Love Sculpture, Steamhammer Medicine Head, Stack Waddy, Black Cat Bones, Blodwyn Pig, Skid Row (w/Gary Moore) and Killing Floor to paint a brilliant picture of the then-thriving scene. There are a few notable exclusions, (Jethro Tull, Zeppelin?) due to licensing, but throw in often-surprising obscurities like Heavy Jelly, Red Dirt, Levee Camp Moan, and Dr. K’s Blues Band and you have a collection well worth the roughly $30 price tag. Grade: A   BUY!