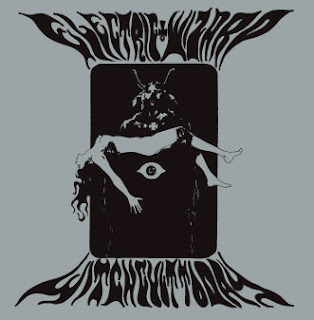 It’s kind of a shame that my generation missed out on this whole stoner rock/doom metal thingie. The best that we suburban cannabis commandos could do was climb in the back of bud Charlie’s Chevy van, torch up something out of a scraggly $15 bag o’ tumbleweed and jam to the Edgar Winter Band’s “Frankenstein.” Edgar and his pals weren’t exactly Kyuss, ya know, bordering closer to the kind of new agey muzak that they’d play at yer Grandma’s nursing home these daze (which gives a whole new meaning to this rocking chair concept, eh?).

The problem with this stoner rock/doom metal nameplate (the two are joined at the hip like some kind of shiny Siamese musical genre) is that the spacier, mellow bands are like an “entry drug,” fuzzy lil’ kittens compared to the bigger, badder, more beastly critters that lie in wait in the darkness of your most-troubled id. When it comes to good, old-fashioned ear thuggery, you won’t find another band that grabs your cochlea and refuses to let go better than Electric Wizard. These purveyors of fine British sludge have been kicking the can around for almost a decade-and-a-half now, and if they haven’t been particularly, well…prolific…during that time, they’ve championed raw, muscular quality over quantity since the very beginning. Jeez, after all, EW ain’t no pop band, innit?

Witchcult Today is Electric Wizard’s latest slab o’ musical madness, and the disc’s eight longish dirges find the Dorset warlocks leaning – almost vertically – into the abyss. Whereas the album-opening title cut is a nifty lil’ piece of mesmerizing ambient childplay, the second mind-numbing track, “Dunwich,” rewrites the rulebook of horror-stoner-doom or whatever-the-hell-you-want-to-call-it. With a detached, fuzzed-out, and distorted guitar attack that sounds like carpenter bees drilling a hole at the base of yer skull, lead Wiz Justin Oborn does his best Ozzie impression, yelping out some hopeless lyrics from the bottom of an endless sonic well. As the blasting rhythms swirl around your head and virtually guarantee swelling of the brain later in your miserable life, the guitars strike, forcing their feedback-drenched, barbed stingers right into the ole medulla oblongata. Yup, the song is that damn good!

Electric Wizard, relentless bunch of bastards that they are, the rest of Witchcult Today provides no rest for wicked little sinners like you and I, cranking songs like “Satanic Rites of Drugula” (so slow-and-methodical that it sounds like two dinosaurs making love), the blood-curdling instrumental “Raptus” (it’s black mass time, and you’re coming over for “dinner”) or the truly eerie “Torquemada 71” (the future soundtrack for a Medieval torture theme park). Witchcult Today closes with two extended, eleven-minute exercises-in-tension, the album-closing “Saturnine” kind of a free-falling, Sabbath-inspired flight of fancy, a real Dave-Brock-meets-Sun-Ra rave-down with the kind of guitarplay that takes Tony Iommi’s nightmares to their absurdist excesses while concrete-block rhythms stomp-and-trudge towards oblivion. The maddening result of this instrumental dichotomy is that “Saturnine” manages to be both a transcendent experience and the most claustrophobic song that’s possibly ever been written – the musical equivalent of solitary confinement in the eternally-gray cell-block of your own damaged cerebellum.

This is some heady stuff, to be sure, Witchcult Today providing plenty o’ riff-driven funeral finery, skull-splitting rhythms, and more than enough Sturm und Drang* to satisfy any dozen chaos-lovin’ thrill-seekers. As a band, Electric Wizard has only one speed – heavy – as they subject your synapses to the dancing white heat/white light of tortured instruments and strangled vocals. There’s nothing subtle about these bounders, and to be honest, an album as brutal and self-realized as Witchcult Today isn’t everybody’s cuppa hemlock tea. As for the Reverend, I think that I’ll take another drink… (Candlelight Records USA, released July 16, 2008)

(BTW, there are exactly 666 words in this CD review. Gotcha!)

1.    Turmoil; ferment: “A book’s historical roots represent another barrier; so does the personal Sturm und Drang of the author” (Robert Kanigel).

2.    A late-18th-century German romantic literary movement whose works typically depicted the struggles of a highly emotional individual against conventional society.