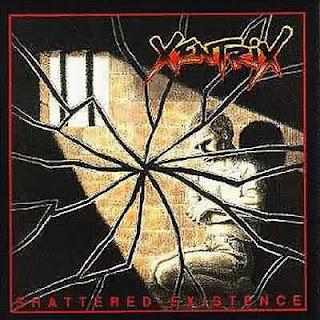 I wrote previously about MVD Audio, the CD end of the Music Video Distributors empire, coming to an agreement with Roadrunner Records to reissue nearly two dozen of the label’s classic ‘80s metal titles in grand new limited editions on gold discs with original cover art, liner notes, lyrics and everything. Having received a number of these groovy reissue discs from the good folks at MVD, and after listening to them repeatedly over the past couple of months (between my stories on teevee and, well, that job thing), now it’s time to write a few words about these mutts.

U.K. thrashmasters Xentrix (pronounced “Zen Tricks” for you Hooked On Phonics™ types), unremarkably, began life as a garden-variety Metallica cover band known about town as Sweet Vengeance. That they chose to channel Metallica is not surprising, really – British bands struggled during the late ‘80s to define their own particular brand of thrash-and-speed-metal chops and many of ‘em sounded like Lars and crew. By the time of the band’s signing with the fledgling Roadrunner label in 1988, based on the strength of their four-song demo tape, the band had changed its name to Xentrix and had already begun to develop its own voice.

Released in 1989, Shattered Existence is one raucous mother of a debut disc. The band kicks the amps up to “11” before declaring “No Compromise,” and then they kept the damn tape rolling long past the point where their collective ears began to bleed. “Dark Enemy” offers up a literal human sacrifice in the form of guitarist Kristian Havard’s hands – surely he lost them after performing the song’s caustic fretboard runs, while “Bad Blood” expanded the band’s musical palette, displaying melodic elements alongside machine-gun drumming, courtesy of the bombastic Dennis Gasser. Vocalist/guitarist and band founder Chris Astley is a capable frontman, his vox sounding like the same shade of gray as James Hetfield’s, snapping and growling like a rabid pup above the razor-sharp mix. The rest of Shattered Existence mines similar thrash/speed-metal turf, alternating between Iommi-inspired heavy riffing and lightning-fast, virtually blinding lead runs.

This MVD reissue of Shattered Existence tacks on three songs from the band’s ill-fated (but energetic) 1990 Ghostbusters EP. The three-song vinyl was released as a stopgap to satisfy new Xentrix’s fans until the release of the For Whose Advantage? album later that year. The band’s inspired cover of Ray Parker Jr’s movie theme song was met with threats of a legal smackdown, however, and the label was forced to recall the EP from the stores. The episode set Xentrix back a bit, but they regrouped and released three more albums for Roadrunner with Astley at the helm, sadly experiencing diminishing returns with each one, proving that they had pretty much spent their creative allowance on Shattered Existence.

Met with commercial indifference in a fluctuating market that had begun to favor grunge bands and vacuous pop, Xentrix dropped its founding frontman and released one last album, 1996’s Scourge, with a new singer and guitarist before disappearing off the heavy metal map. Shattered Existence remains as a classic example of ‘80s-era thrash-metal, however, a solid collection of songs with performances that transcended the musician’s combined skills. With old-school thrashers like Testament and Exodus still kicking the ball around and digging up new fans from beneath the blood-soaked sod of the music industry, Xentrix deserves another day in the sun... (MVD Audio/Metal Mind Records, released 2006)