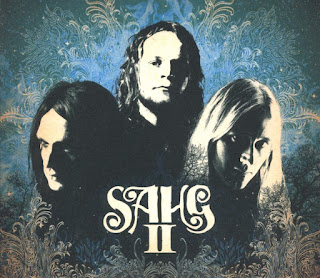 No doubt, the axe-manglers in Sahg have drunk from the cup of Popoff and listened intently to their scratchy old Sabbath and Zeppelin elpees. Their obvious influences notwithstanding, Sahg aren’t your garden-variety dirt-merchants, tilling the fertile doom-metal earth that so many others have plowed before them. Nosirree, these Norwegian knuckleheads have the audacity to believe that they can improve upon the original blueprint, adding a little razzle-dazzle here, and a bit o’ stoned proggy vibe there, thinking that it would pass muster.

Ordinarily, the Reverend would give ‘em the thumb and send the lot of them on their way back to the frozen fjords of northern Europe…’cept that Sahg II is a mighty nifty slice of good ol’ fashioned ear sludge. This disc will provide the discriminating listener with all of the max-volume daily requirements of broken guitar strings, busted drumheads and jackhammer basslines that you need to go about yer daily bizness, whatever sordid debauchery said bidness might involve…

With their 2006 debut album, Sahg showed that they could successful create music that conveyed a sense of texture…yeah, that texture was mostly concrete-quicksand, threaded throughout with rebar-like six-string histrionics that would make Uncle Tony gleeful with gratitude. But, it was the kind of album that Sahg could bring home and hang on the
Osborne family refrigerator. With Sahg II, however, the boys have jumped in front of their glue-sniffing, gold-star elementary school classmates and are ready to spin-the-bottle on their junior high prom night. Sure, these songs still include the kind of plodding dino-dance rhythms and down-tuned guitars that send the cult of Iommi into ecstatic cold shivers and priapism. But Sahg has expanded its palette here, ya see, broadening the sound of their songs…and more power to ‘em, I say. If their initial musical efforts displayed great texture, Sahg II brings ATMOSPHERE into the mix…thick, beefy, lung-smothering atmosphere, the kind of heavy drapery that inhabits nightmares and really, really good horror movies.

How Sahg made this major league leap o’ faith, musically, is nobody’s business but their own, I suppose…my job is to simply evaluate and criticize, yours is to shut your yap and listen up. My guess – if my lifetime batting average was better than .233 with these sort of pitches – is that the prog-metal flourishes that the band brings to the table this time out, along with a longer song structure (the tunes are 25% longer here on average than on Sahg I, by my cipherin’), has allowed Sahg to fully display their instrumental prowess, thus creating that wonderful atmospheric backdrop that I was raving about somewhere previously. Simply put, there’s a lot of meat on this bone, and you can really sink your teeth into some of the rabid rave-ups on Sahg II. “Echoes Ring Forever” sounds like Zep’s “hammer of the gods” poundin’ on yer noggin, but with vox that rip and tear at the fabric of reality while the music comes crashing down around your ears like shattered glass and twisted steel. The guitar solo in the middle of this one is so frightfully magnificent that it hurts.

“Star-Crossed” might pass for an outtake from Sabbath’s Vol. 4 save for the song’s rhythmic foundation, which just kind of shuffles along at a Vanilla Fudge pace while frowny-face guitars creepy-crawl all over the vocals. “Pyromancer” is the kind of alchemical firestarter that only Killing Joke has managed to conjure up during my lifetime, while the nearly eleven-minute dirge “Monomania” is a cinematic bloodbath. Breathless, hypnotic, exotic, and possibly addictive, this radioactive-relic of another era successfully molds the mystery of Sabbath, the lysergic-fueled insanity of Hawkwind, the dark occultism of Zeppelin, and Sahg’s own unique, disturbing metallic vision into a saber-rattling golem hellbent on destruction…the song is just that damn good!

Bottom line, droogs: if you live and breathe for the holy trinity of Sabbath, Pentagram, and Saint Vitus, you’ll probably dig this, too, even if it doesn’t exactly adhere to the doom-metal orthodoxy. With only their second album, Sahg has delivered a near-masterpiece of HEAVY music, and you can’t say that about many underclassmen. Can’t wait to see what they drop on us when they get kicked out of high school... (Regain Records, released February 11, 2008)