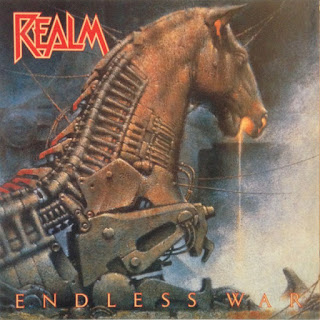 From jump street, Realm’s 1988 debut album Endless War comes galloping out of your speakers like the Four Horsemen of some alternative, leather-clad Apocalypse, grabbing your ears and smacking your pointy lil’ head against the pavement until you give up your lunch money. That’s lofty praise, to be sure, but from the opening chords of the album’s title track ‘til the final musical explosion that Realm titled “Poisoned Minds,” Endless War is a high-octane kick-in-the-groin with the dreaded steel-toed work boot (size 12, I think). Part of the MVD Audio reissue series of classic Roadrunner Records titles from the golden age of heavy metal, Endless Realm kicks serious ass in every way that you could imagine (967 if you’re actually counting).

Roaring out of the unlikely environs of Massachusetts, Wisconsin, Realm took the early ‘80s thrash-metal revolution that had already infected the West Coast seriously. More so, these jugheads took it PERSONALLY as well, figuring, I guess, that they could tear down buildings and deflower virginal young maidens as well as Hetfield, Mustaine or the assorted (sordid?) mopes from Testament, or maybe even better. Fey Cali metalheads aside, Realm was formed in 1985 by vocalist Mark Antoni, guitarists Takis Kinis and Paul Laganowski, bassist Steve Post and drummer Mike Olson. After circulating a couple of demo tapes around the growing metal tape-trading underground, and selling a few thousand copies out of their collective car trunks and by mail order (back in the pre-web daze), Realm signed a with the young Roadrunner Records label in 1988.

With Endless War, the Realm guys figured that they had built a better metal mousetrap, and I’d have to agree with them (and not only ‘cause they’re currently holding my dog Mugsy hostage…you’ll be home soon boy, I promise!). In Mark Antoni, Realm had an unusually talented vocalist (for a thrash band, that is), an old-school warbler that soared rather than growled, hitting the notes high and low like Dickinson from Iron Maiden or Savatage’s Jon Oliva. Antoni struts and swaggers through the mix like some sort of spotlight-clad Greek deity while the rest of the band knocks down the riffs and rhythms with reckless glee.

Here’s the other unusual thing about Realm – even a casual listen to Endless War displays technical chops more akin to contemporary prog-metal outfits than twenty-year-old thrash-metal bands. The guys in Realm, particularly guitarists Laganowski and Kinis, bring a big dose of melodic technicality to the music, refusing to trade skills for power and vice versa. There are a lot of progressive elements in Realm’s sound, from the intricate guitar interplay to the careful rhythmic construction. Drummer Olson can blister the skins with the best of ‘em, but he can also follow Post’s rhythmic lead and deliver subtle flourishes that fill out the band’s sound nicely.

It all comes down to the songs though, don’t it, which in the case of Realm’s Endless War, are a breathless mix of traditional metal construct, futuristic flights of fancy (a la Voivod), classic thrash-and-speed-metal elements (think early Metallica or Megadeth) and an undeniable progressive undercurrent (Uriah Heep, Rush). Lyrically, with words mostly penned by guitarist Kinis, Realm follows an artistic path similar to heavy metal colleagues like Nuclear Assault, Riot, or Intruder, mixing socially-conscious story-songs with fantasy-influenced wordplay. It’s the sheer sonic power of the material on Endless War that keeps Realm in high favor among metal collectors, though, from the unrelenting search-and-destroy mission that is “All Heads Will Turn To the Hunt” to the gentle-like-a-sledgehammer Zeppisms of “Root of Evil” or the soul crushing, eardrum-busting, liver-shaking sturm und drang of “Poisoned Minds.” To further turn the world on its head, Realm dared to deliver a red hot cover of the Beatles “Eleanor Rigby,” reinventing the classic rock chestnut in a way that not even John Lennon’s mother would recognize.

In the long run, Realm didn’t have the spark in ‘em to carry on much further than Endless War. They released an appropriately vicious follow-up, Suiciety, in 1990, which has also been reissued by MVD Audio with the entire luxury package, and the band reportedly recorded an unreleased third album a couple of years later. As I’ve told you all before, however, the early ’90s proved to be a sodden bloody killing floor for all things metal, and it wasn’t until later in the decade when boy bands suddenly ruled the earth that shaggy-headed teenaged miscreants (much like the Reverend when he was a young Neanderthal) went looking for more meaningful musical experiences, finding Realm’s fine pair of albums in the process.

Regardless of your tastes in metal (I like mine barbequed, personally), if you still get shivers at the sound of clashing guitars and are drawn to rampaging drumbeats like a flea-bitten hound at the sound of a dog whistle, you owe it to yourself to dig up a copy of Realm’s Endless War. Provided a proper reissuing with scalpel-sharp 24-bit remastering, a high-quality shiny gold disc, original art, an attractive booklet with lots of words and song lyrics (and liner notes from guitarist Takis Kinis) in a limited edition of 2k, you’d better find your copy today. The Reverend doth decree it! (MVD Audio/Metal Mind Records, released 2006)

Review originally published by the Trademark of Quality (TMQ) blog, 2006