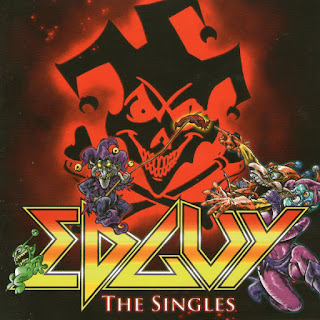 German heavy metal heroes Edguy have come a long way in a little more than a decade. While the band was formed when many of the principle players were still in their teens, the talent and the ambition of the band members has grown proportionately during the ensuing years. Nothing if not prolific, Edguy has cranked out almost ten studio and live albums since its inception, as well as a trio of multi-song EPs.

The Singles, released to coincide with the U.S. release by Nuclear Blast of Edguy’s Tinnitus Sanctus album, is a collection of songs from those three extended play discs. Unlike a lot of band’s odds-and-sods collections like this, The Singles is all flurry and no slurry, just fine grab-you-by-the-balls-¬and-don’t-let-go rockers on the power-metal edge.

Opening The Singles, “Superheroes” is one magnificent bastard, a molten slab of livewire power-metal grandeur that layers on Tobias Sammet’s soaring vox, jagged shards of frantic guitarplay, and even an orchestral string quartet to create a fusion of high-and-lowbrow rock that will knock you on your ass. “Blessing In Disguise,” also from the Superheroes EP, is a moody, atmospheric exercise in dark-hued pop psychology. Sammet’s vocals are stretched to their power-ballad best hear, asked to rise from a whisper to a roar above the staggering guitar genius of Jens Ludwig and Dirk Sauer’s twin axes.

The romp-and-stomp “Judas In the Opera” gallops across Iron Maiden territory with its dueling wildfire fretwork, rapidfire drum-beaten rhythms, and classically-styled vocals. With guest voice Michael Kiske and an orchestral backing adding to the operatic zeal of the performance, the song’s lyrics and extravagant delivery reminds of Freddie Mercury and Queen. It is, indeed, a mini-passion play ripped through in a mere seven minutes plus and a rare moment of pomp-rock among the metal gems found on The Singles. The raucous “Lavatory Love Machine,” from the 2004 EP of the same, is presented here in both full and acoustic versions.

Life and Times of A Bonus Track

The rough-and-tumble original is an engaging stab at sleaze-rock melded with power-and-glory-metal, a meeting of Zodiac Mindwarp and Stratovarius in the high school bathroom of your choice. The “acoustic version” is a bird of an entirely different color, an upbeat and lively rocker with flamboyant feathery, raspy vocals unrestrained by metal conventions, and diamond-hard guitar-strum that adds a fine dimension to the song. “King of Fools,” from the 2004 EP by that name, is a darker, harder, more syncopated firecracker of scraped riffs and explosive rhythms with a mix of echoed, growled, and lofty vocals and bits of odd symphonic synth thrown in for color. “New Age Messiah” may begin with a pastoral intro, but it quickly descends into madness with a rush of shovelhead drumbeats and slaughter-of-the-lambs fretwork.

Even the songs that Edguy choose to cover are choice, from their hauntingly epic take on Magnum’s 1982 gem “The Spirit” to Europe’s morose “I’ll Cry For You,” re-imagined here as a lively acoustic-rocker with passionate vocals and strong, supporting guitarwork and vocal harmonies. Edguy’s The Singles closes out with the hilarious “Life and Times of A Bonus Track,” a tongue-in-cheek anthropomorphism of music that speaks of “Chinese bootlegs” and “Russian piracy” while concluding that “I don’t give a shit; to me it’s all the same, as long as I get all the fame, and the girls know my name.” This is sung from the bonus track’s point-of-¬view, of course, so that band doesn’t really reveal its own perspective, but it’s a fun and funky little diversion nonetheless. 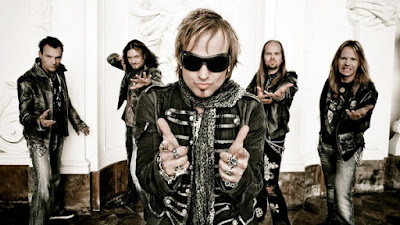 Sure, The Singles may be a collection of the band’s also-rans and left-behinds. But that doesn’t mean that any given song here is anything less than a high-flying example of Edguy’s hard-rocking, melodic power-metal crusade. (Nuclear Blast Records, released November 27, 2008)

Buy the CD from Amazon.com: Edguy’s The Singles

Review originally published by the Trademark of Quality (TMQ) zine, 2008