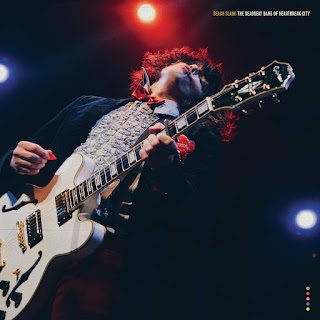 Beach Slang – The Deadbeat Bang of Heartbeat City (Bridge Nine)
There’s no denying that James Alex and his Beach Slang gang wear their Replacements idolatry on their collective sleeves, but that doesn’t mean you should ignore The Deadbeat Bang of Heartbeat City. With former ‘Mats bassist Tommy Stinson helping craft the album’s sound, the band revels in the unbridled joy of playing rock ‘n’ roll with reckless abandon and guitars in overdrive. Sure, songs like “Born To Raise Hell,” “Tommy In the 80s,” and “All the Kids In L.A.” evince an obvious Replacements sonic vibe, but I think that Alex is a better lyricist (i.e. less self-absorbed) than Westerberg at this point in his career, and I hear strains of Hanoi Rocks and Superchunk in this gleeful din as well as a can’t-put-your-finger-on-it genius that separates Beach Slang from a generation of Replacements sound-alikes. I expect I’ll be playing Deadbeat Bang a helluva lot in 2020 (and so should you…). Grade: A   BUY! 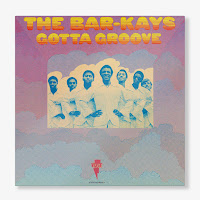 The Bar-Kays – Gotta Groove (Craft Recordings vinyl reissue)
The Bar-Kays’ Gotta Groove was a comeback effort by a band recovering from tragedy, after losing most of its members in the plane crash that also killed Otis Redding. The survivors rebuilt the band and found the funk with this energetic comeback effort. Inspired by Sly Stone, “Don’t Stop Dancing (To the Music), Part 1” is a joyful fusion of funk ‘n’ soul with blasting horns, a busy instrumental mix, and an overall raucous party vibe. They slow it down a bit for an instrumental cover of Marvin Gaye’s “If This World Were Mine,” which displayed the band’s musical chops, but the party cranks up again with the rowdy, mostly-instrumental jam “Funky Thang.” This version of the Bar-Kays would later back up Isaac Hayes on his landmark Hot Buttered Soul LP and, as members came and went, would find success venturing further into funk and disco throughout the mid-to-late ‘70s. Grade: B   BUY! 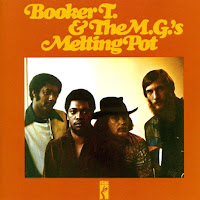 Booker T. & the M.G.’s – Melting Pot (Craft Recordings, vinyl reissue)
With both Booker T. Jones and Steve Cropper looking to exit the Stax Records factory, 1971’s Melting Pot was recorded in NYC rather than Memphis. The album lives up to title, featuring a fusion of sounds befitting Jones’ expanding artistic vision, offering longer original songs with lengthy instrumental jams. “Back Home” mixes Southern rock and soul with gospel fervor, while the down ‘n’ dirty swamp-rock of “Chicken Pox” is brimming over with imaginative keyboards and greasy guitar picking. Running nearly nine minutes, “Kinda Like Easy” is a sequel, of sorts, to the band’s early hit “Green Onions,” the song mining a similar rhythmic canvas atop which Jones layers keyboard riffs and Donald “Duck” Dunn’s bass lines echo with malice. The band’s last album for Stax, Melting Pot would become their most commercially successful album since 1967’s Hip Hug-Her, yielding a hit with an edited version of the eight-minute title track. Grade: B+   BUY! 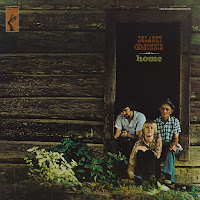 Delaney & Bonnie – Home (Craft Recordings, vinyl reissue)
The 1969 debut by Delaney & Bonnie – the talented pairing of Delaney and Bonnie Bramlett – Home was produced by Stax Records stalwarts Don Nix and Donald “Duck” Dunn, its groundbreaking sound providing a foundation for the duo’s later work, their blend of country, blues, and soul influencing the entire Americana genre. There’s a lot to like about Home, beginning with the album-opening “It’s Been A Long Time Coming,” which places Delaney’s gritty, soulful voice against Bonnie’s soaring tones for a stunning duet while the Steve Cropper and Eddie Floyd-penned “We Can Love” should have been a hit single, the song reveling in a Sam Cooke groove and an Aretha vibe. Home failed to chart, and Stax dropped Delaney & Bonnie from their roster, but the album did attract the notice of people like Eric Clapton and George Harrison, who would help the duo write their next chapter of their career. Grade: B+   BUY! 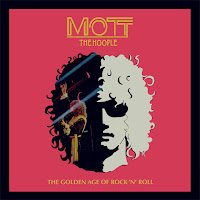 Mott the Hoople – The Golden Age of Rock ‘n’ Roll (Madfish Records, UK)
The Golden Age of Rock ‘n’ Roll is a two-LP, vinyl-only import compilation of the legendary Mott the Hoople’s three-album tenure with Columbia Records circa 1972-74 and, as such, it’s a real gem. All the UK hits are here – “All the Young Dudes,” “Honaloochie Boogie,” “All the Way From Memphis,” “Roll Away the Stone,” and the title track. The set also includes rare B-sides and UK single versions that were unavailable to stateside fans back in the day. Throw in lesser-known obscurities like “Marionette,” “Foxy Foxy,” “Saturday Gigs,” “Rose,” “Rest In Peace,” and Mott’s inspired version of Lou Reed’s classic “Sweet Jane” and you’ll see why Ian Hunter, Mick Ralphs, Overend, and the rest of the gang inspired everybody from Queen and the Clash to Def Leppard and Kiss. Beautiful gatefold packaging with liner notes by Hunter biographer Campbell Devine makes this essential for any Hoople fanatic. Grade: A+   BUY! 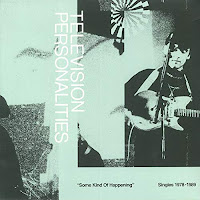 Television Personalities – Some Kind of Happening (Fire Records)
The first of two double-disc volumes documenting beloved British rock institution Television Personalities, Some Kind of Happening is a collection of the band’s UK single releases circa 1978 to 1989. Although the band came of age during, and was inspired by the punk revolution, singer-songwriter Dan Treacy was too incorruptible to merely chase three-chord clichés. As such, the 45s preserved by Some Kind of Happening range from atonal post-punk and neo-psychedelia to melodic indie pop. The band was never more than a cult favorite stateside, but they influenced numerous college rockers of the 1980s and ’90s and Treacy’s restless muse, combined with his wry humor and dry wit, make songs like “Part Time Punks,” “If That’s What Love Is,” and “Paradise Estate” a joy. A whimsical cover of Syd Barrett’s “Apples and Oranges” and the Treacy original “I Know Where Syd Barrett Lives” are worth the price of admission alone. Grade: A   BUY!