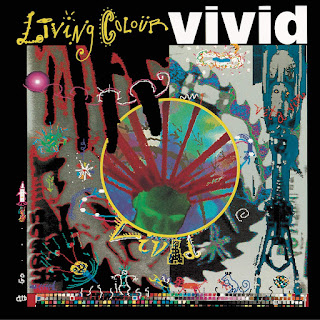 When they came along in the late ‘90s, Living Colour was an anomaly among hard rock bands. First of all, the members were all young African-American men with musical backgrounds in jazz, R&B and improvisational avant-garde music. Rock ‘n’ roll at the time was sheer whitebread, dominated by longhaired white boys, the cultural diversity of the late ‘60s/early ‘70s overthrown by corporate homogenization.

Living Colour didn’t fit into MTV’s nerf metal demographic but damned if they didn’t rock harder than half a dozen Motley Crue clones. The band seemingly appeared out of nowhere in the summer of 1988 with the release of its debut album, Vivid, but New York City fans knew differently. Living Colour had been banging around town for a couple of years, refining their sound and stage presence with residencies at clubs like CBGBs.


The release of Vivid would break through the barriers of race in rock, opening the door for multi-cultural ‘90s hard rock bands like Rage Against the Machine and System of A Down. This breakthrough was accomplished mostly on the strength of a single song, the blistering “Cult of Personality,” the accompanying video dominating the MTV playlist well into 1989 and breaking the band with a white audience. It was apparent from the video for “Cult of Personality” that Living Colour wasn’t kicking out the same old shit.

Vernon Reid wasn’t just another heavy metal guitar god, but a world-class six-string wizard who had earned his bones as a member of the experimental Ronald Shannon Jackson’s Decoder Society. The rhythm section of bassist Muzz Skillings and drummer Will Calhoun provided as big a beat as a band could ever want while frontman Corey Glover – largely untrained and with little experience as a singer – perfectly complimented the band’s funky, unpredictable groove with his rough-hewn, soulful vocal style.

Listening to the recently remastered reissue CD of Vivid shows that the album held much more great music than the celebrated hit single. Living Colour incorporated many styles and influences into the band’s sound, placing disparate elements of freeform jazz, funk, soul, heavy metal and guitar pyrotechnics into a hard rock framework. While songs such as “Open Letter (To A Landlord)” and “Funny Vibe” showcased the band’s social consciousness, visiting themes of poverty, homelessness and race, songs like the hedonistic “Glamour Boys” or “I Want To Know” were pop-influenced rockers with an almost new wave sound. (This was the ‘80s, after all….) When the band hit a metallic groove, however, as with “Cult of Personality,” “Middle Man,” or “What’s Your Favorite Color?” there were few other bands around who could match Living Colour’s powerful and innovative sound.


The CD reissue of Vivid includes five bonus cuts culled from 12” singles; most of which have never appeared on compact disc before. A hip-hop remix of “Funny Vibe” by Prince Paul includes cameos from rappers like Daddy-O and Chuck D and Flavor Flav of Public Enemy. A red-hot cover of the Clash’s “Should I Stay Or Should I Go” and a live version of “Middle Man” appeared previously on the band’s Biscuits collection. A Keith LeBlanc remix of “What’s Your Favorite Color?” adds to the funk quotient while a live performance of “Cult of Personality” closes Vivid and blows the roof off the mutha!

One of the most important albums in rock history, Vivid sold over a million copies and earned the band a Grammy® Award. More important, though, is the influence the album and Living Colour would have on those that would follow. With Vivid, Living Colour literally changed the face of rock ‘n’ roll. (Legacy Recordings, released May 4, 2010)