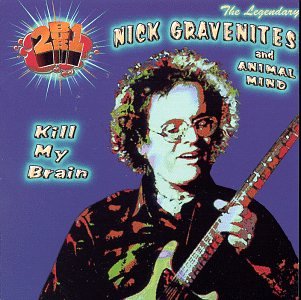 By any accounts, Nick Gravenites owns one of the most impressive resumes in rock and blues music. A founding member of the legendary Butterfield Blues Band, he wrote several of their more notable songs, including “Born In Chicago.” Gravenites has enjoyed a thirty-year career as a songwriter, guitarist and producer, appearing on some 45 albums as a musician. He’s had songs recorded by folks like Janis Joplin, Quicksilver Messenger Service and Howlin’ Wolf and produced artists like James Cotton and Mike Bloomfield. So you’re asking yourself, “how come I haven’t heard of this guy if he’s such a genius, eh?” You can cure your ignorance by digging up a copy of Kill My Brain, the first CD in a proverbial month o’ Sundays by Gravenites and his long-time band Animal Mind.

Released by the small San Francisco indie 2 Burn 1 Records, which usually specializes in some pretty esoteric reggae titles, Kill My Brain is the perfect introduction to this talented and underrated artist. Featuring Gravenites’ trademark electric blues and guitar-driven rock, Kill My Brain is a wonderful collection of songs with enough heart to appeal to your intellect and enough muscle to blow your ears out. Although the title song is a bit of a clunker, with pretty garish backing vocals, the remainder of the disc holds up magnificently.

“Didn’t You Used To be Somebody” opens with a somber organ riff and choral accompaniment, leading into a poignant tale of Gravenites’ career and the death of Janis Joplin. “Get Together” presents the classic rock chestnut in a different, bluesier light while “Your Heart’s In the Wrong Place” is a lively, uptempo blues number complete with horns and Gravenites’ soulful vocals. Closing the album with a bang, “I’m Gone” is the sort of high-energy Chicago rave-up that Gravenites used to perform with Paul Butterfield and gang back in the day.

Assisted by his backing band, Animal Mind, which includes Pete Sears of Hot Tuna and the Blues Project’s Roy Blumenfeld, Kill My Brain also offers guest shots from Sammy Hagar and Huey Lewis. A fine example of what can be done with rock music in a blues context, I’d much rather listen to somebody like Nick Gravenites, who continues to bring new perspective to an old art form, than an Eric Clapton, who coasts on past accomplishments. If you’d like to find out what all of the fuss is about, check out Kill My Brain and discover why Nick Gravenites is one of rock music’s “most valuable players.” (2 Burn 1 Records, released April 6, 1999)