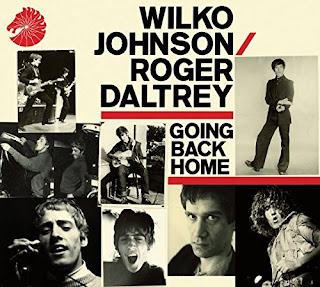 Wilko Johnson is dying…it’s a sad but true, and an inconvenience that has seemingly done little to slow down the legendry and influential British guitarist. Diagnosed with terminal pancreatic cancer in January 2013, Johnson was given, best case scenario, ten months to live. At six months past his expiry, he continues to rock every bit as hard as he has during his entire career. After a “farewell tour” which stretched throughout much of 2013, Johnson and his road-tested live band continue to light up stages across the United Kingdom.

Johnson made his bones as the guitarist of British pub-rock legends Dr. Feelgood, lending his talents and unique finger-picked guitar style to the band’s first four albums, from 1975’s Down By the Jetty to 1977’s Sneakin Suspicion, after which he left the band to launch a solo career that is now in its fifth decade. For those not in the know, pub-rock was a uniquely British institution that took its inspiration from 1950s-era proto-rock and rhythm and blues and 1960s bands like the Rolling Stones and the Yardbirds. It was raw, it was rootsy, and it was highly influential on the late ‘70s punk and new wave scenes that would follow. It was typically performed in pubs rather than large concert venues, and bands like Dr. Feelgood, Brinsley Schwarz (with Nick Lowe), and Ducks Deluxe paved the way for more successful artists like Elvis Costello, Graham Parker, and Joe Strummer and the Clash.


With a death sentence hanging over his head, Johnson knew that his date with the Reaper was coming, and he wanted to leave one last album for his long-time fans. He and Roger Daltrey of the Who had talked as early as 2010 about working together, about recording an album of the sort of old-school British R&B – like Johnny Kidd & the Pirates – that they both loved as teens. After the Who wrapped up its 2013 tour, Johnson got Daltrey into the studio for a week in November to record Going Back Home, using Johnson’s touring band for back-up.

Comprised of eleven songs, including a raucous cover of Bob Dylan’s “Can You Please Crawl Out Your Window,” Going Back Home features songs written or co-written by Johnson, drawn from across his solo career and his years with Dr. Feelgood, the material re-imagined in a raw, intimate, rockin’ British R&B style. Somebody convinced Universal Music to reactive the Chess Records imprint to release Going Back Home, and it was a good decision, as the album displays all the heart and soul of the 1950s and ‘60s era Chess records that influenced Daltrey and Johnson as young men.

Daltrey’s once-golden voice is nowhere near what it was during the Who’s mid-‘70s peak, but it’s perfectly suited to a bluesy reinterpretation of Johnson’s songs. Going Back Home kicks off with the title track, Daltrey’s growled, primal vocals reminiscent of the great Howlin’ Wolf as Mick Talbot’s tinkling piano keys add a distinctive honky-tonk vibe. Harp player Steve Weston knocks out riffs in the spirit of Little Walter while Johnson’s percussive fretwork establishes a rhythmic bottom end. Call it Chicago-styled blues with a British flavor, the arrangement dominated by piano and harmonica. By contrast, “Ice On the Motorway” is a lively romp with funky rhythms, engaging guitar licks, and an overall Southern soul vibe. Daltrey’s vocals are fierce and Johnson’s riffing is wiry and hypnotic, making for a livewire three minutes of music.

Some Kind of Hero


Johnson and Daltrey do a fine job in covering Dylan’s “Can You Please Crawl Out Your Window,” the singer’s hearty vocals miles away from the Scribe’s nasal drawl, but curiously effective as they impart a deep emotion to the lyrics. Johnson leads the band through an energetic arrangement, drummer Dylan Howe adding some nice percussive fills while Weston’s harp dances spryly atop the instrumentation. Johnson’s guitar is relegated mostly to rhythmic support, but its presence is felt nonetheless. “Keep On Loving You” would have made a great Muddy Waters track, its energetic, slightly-funky feel reminiscent of the Master’s early ‘70s “electric blues” albums. Johnson’s guitar is given room to shine here, Wilko plucking imaginative notes out of the air and feeding them through his fingers as Daltrey’s anguished vocals ride low alongside a steady drumbeat and washes of keyboard.

Johnson’s “Some Kind of Hero” is a perfect example of mid-‘70s pub-rock, the song an amalgam of bluesy licks, rockin’ rhythms, and rootsy twang-bangin’ that moves like a reckless locomotive on a rhythmic bedrock of driving guitar, blasts of harp, rapid-fire drumbeats, and piano-pounding worthy of ol’ Otis Spann. “Keep It Out of Sight” is also reminiscent of the era, mixing up period soul and rock ‘n’ roll with Daltrey’s powerful vocals at the forefront, lush instrumentation behind, and Johnson’s razor-sharp fretwork throughout. Talbot’s Hammond organ plows through the mix like a mad bull, and the entire performance hits your ears like a long-forgotten dream, dredging up memories of half-remembered songs and music long past.

Going Back Home closes with two of Johnson’s best songs – “Everybody’s Carrying A Gun” and “All Through the City” – both performances showcasing the guitarist’s underrated lyrical skills. The former is a cautionary tale of fame that Daltrey knocks out of the park with his knowing vocals and Johnson spices up with rollicking, rockabilly-tinged guitar licks. Toss in Talbot’s honky-tonk ivories and a raucous rhythmic foundation created by Norman Watt-Roy’s throbbing bass line and you have an ear-tickling performance. The latter song is an insightful portrait of street life painted with vivid lyrics, an infectious melody, and some of Johnson’s rawest, most electrifying guitarwork. Daltrey’s vocals snarl and sneer like his best work with the Who, the song finishing the album with a definite edge.


Wilko Johnson and Roger Daltrey have delivered a minor masterpiece with Going Back Home, the two rock ‘n’ roll lifers tearing up the studio like they were both nineteen years old again. As swansongs go, Johnson couldn’t have done any better – his songs, his guitar playing, and his band leadership serving as a fitting last will and testament, creating a highly entertaining set of blues and rock music served up with energy and affection. Everybody here realizes the stakes, and their combined talents deliver a recording worthy of the Chess Records imprint.

Although not a traditional blues album by any measure, Going Back Home is Chicago and Delta blues as filtered through British rock sensibilities, and certainly Mississippi-bred bluesmen like Waters and the Wolf would recognize their influence on Daltrey and Johnson alike. Kudos to Roger Daltrey for the passion and skill he brings to these performances, and to Wilko Johnson, who continues to deliver for his fans under the most stressful of circumstances, displaying his talents with an energy and vitality of an artist half his age. (Chess Records, released March 25, 2014)

Editor’s note: Thankfully, Wilko beat the cancer that threatened to kill him and he continues to perform and record, releasing most recent album, Blow Your Mind, in 2018!