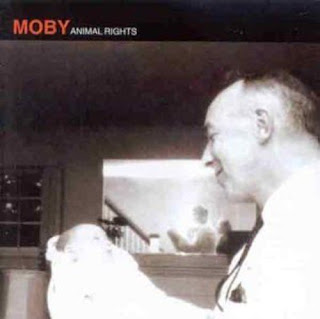 Along with Prodigy and the Aphex Twin, British artist Moby helped define early ’80s English club culture. Mixing Eno-inspired ambient music with electronic techno/rave compositions, Moby created a genre onto himself that led to many a ecstasy-fueled dancefloor trance. None of these Anglo-artists have broken through to a mainstream American audience as of yet, but no one can’t fault them for trying. Prodigy are attempting to conquer the states via appearances at this year’s Lollapalooza Festival, while Moby has made his bid for U.S. chart dominance via the release of his strongest album yet. Although it seems – at this date, at least – that Animal Rights is a failed attempt, commercially, from an artistic perspective a critic couldn’t ask for a more invigorating album.

With Animal Rights, Moby takes a step towards a harder rocking sound that incorporates his ambient and classical influences alongside strains of metal, industrial, and noise. Moby the producer juxtaposes moments of instrumental calm with those of sheer lyrical and musical white light/white noise. Although many songs here showcase the artist’s social conscious, both lyrics and liner notes covering a broad range of topics, it is the words, phrases and melodies seemingly tossed away at random that seep into one’s consciousness for future recall.

While the label released Moby’s cover of Mission of Burma’s “That’s When I Reach For My Revolver” – perhaps the weakest song on the disc – to moderate radio airplay, they missed the strengths of cuts like “Soft” or “Come On Baby,” which would sonically fit well into playlists alongside Tool, Korn, or Nine Inch Nails. Overall, however, the album is structured as an entire artistic piece not well made for pulling out radio cuts. Although not a concept album, as such, Animal Rights nonetheless should be listened to in its entirety, where the subtle interplay between light and dark, the clashing of ambiance and primal rock can work its magick the way that the composer meant it to.

Following in the footsteps of obvious influences like Brian Eno, Robert Fripp, and David Bowie, Moby creates music that is much more than the sum of its parts. A talented multi-instrumentalist, Moby is a vastly underrated guitarist, and if he delivers only a few amazing six-string flourishes during the massive instrumental attacks to be found on much of Animal Rights it only leaves the listener wanting for more.

Moby is, perhaps, one of the most exciting and stimulating composers in the rock genre today and if commercial stardom forever eludes him, it is only because Moby seems destined to make the same sort of historic contribution to the rock genre as the aforementioned artists. Animal Rights is a ground-breaking album, the sort that only comes around once or twice a decade. (Elektra Records, released September 23, 1996)