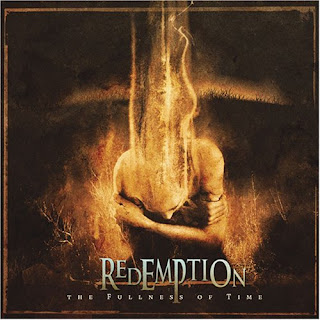 On paper, Redemption’s pedigree couldn’t look any stronger – vocalist Ray Alder and guitarist Bernie Versailles hail from the legendary band Fate’s Warning while bassist James Sherwood and drummer Chris Quirarte are on loan from up-and-coming prog-metal band Prymary. Multi-instrumentalist Nick van Dyk is the glue that holds it all together, molding the contributions of these various talents into a cohesive sound and sonic texture imbued with his unique musical vision.

Redemption’s The Fullness of Time

Any questions of a “sophomore slump” are quickly laid to rest with the opening notes of The Fullness of Time, Redemption’s second album. “Threads” kicks off with blazing guitar riffs, waves of sound leveling everything within sight until the quieting piano begins to seep in around the edges of the song. From this point, it’s full-scale madness, galloping rhythms supporting Alder’s soaring vocals as the song takes more instrumental twists and turns than a dark country road. “Parker’s Eyes” is a chilling take on the loss of innocence, using the tragedy of September 11th as a backdrop to illustrate the effects of hate and violence. Alder’s vocals impart a certain weary worldliness to van Dyk’s intelligent lyrics, while cacophonic instrumentation swirls behind him in the mix.

“Scarred” is a battle of self-doubt and reflection, the song matching industrial-strength arena-rock riffs with classic prog keyboard wizardry behind Alder’s impressive vocal gymnastics. “Sapphire,” a tale of love lost, or perhaps the path not taken, begins as a subdued ballad before van Dyk’s keyboards take flight and the drums begin to pound and the entire band kicks in and the song leaves the stratosphere on wings of divine noise. The second half of The Fullness of Time is a conceptual song suite, lyrically divided into four themes. As you might guess from the titles of each section, the song describes a spiritual journey, of sorts, from the betrayal and loss of “Rage” and the subsequent abject loneliness and hopelessness of “Despair” to forgiveness of “Release” and the freedom of “Transcendence.”

It’s an ambitious lyrical suite that stumbles now and then but succeeds in the end, describing both a personal sojourn as well as that of the country in a post-911 world, all wounds healed by only “the fullness of time.” The four songs, clocking in at a healthy 20 minutes altogether, are also an excellent showcase for the instrumental prowess of the band that van Dyk has assembled. Over the course of the four sections, everybody has a chance to shine, and the various inspired combinations of vocals, guitar, bass, drums and keyboards stun the listener with both the creative mastery and the technical proficiency of the players.

Progressive rock and metal may be about the least “hip” genres on the entire musical planet, kissing cousins holding hands, snubbed by alt-rock indifference and ridicule. As fans of the two faces of prog realize, though, there’s some great music being made in the trenches, bands like Redemption leading the charge out of the underground.

Incorporating elements of everybody that has come before, from Kansas and Rush to Dream Theater, Fate’s Warning and Spock’s Beard, Nicolas van Dyk has brought his considerable vision and talent to bear on The Fullness of Time and it shows. If you’re bored by the cookie-cutter kiddie-metal and rote hard rock being crammed down your throat by the major labels, take a walk on the prog-rock wild side with Redemption. (Sensory Records, released June 21st, 2005)

Buy the CD from Amazon.com: Redemption’s The Fullness of Time