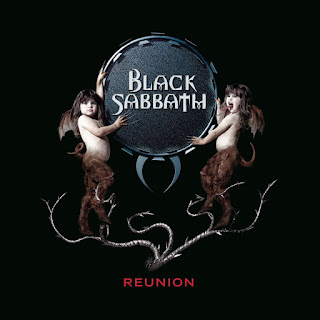 Perhaps the greatest of the primal heavy metal bands that walked the earth during the early 1970s, Black Sabbath defied critical expectations and went on to become not only one of the most successful acts in rock music during that decade but also one of the most influential. From Guns ‘N’ Roses and Iron Maiden to White Zombie and Marilyn Manson, not a single one of them would have existed if not for Sabbath’s groundbreaking musical efforts. Although signature Sabbath vocalist Ozzy Osbourne would leave the band in 1980 to become a superstar in his own right, the band continued to carry on through the two decades to follow. Making both good records and bad, Sabbath trudged along under guitarist Tony Iommi’s guiding hand to become one of rock music’s most enduring legends.

Sabbath has now come full-circle as the original foursome of Ozzy, Iommi, drummer Bill Ward, and bassist Geezer Butler got together again last December for a couple of live performances. The result is captured on the 2-CD Reunion, a long overdue live set from one of rock’s monster live bands. Unlike their contemporaries, Kiss, another recently reunited rock legend created by the fans rather than the critics, Sabbath didn’t attempt to knock people out with a set of new songs. No, they decided to give their fans what they’ve always wanted – red-hot live versions of some of their greatest hits. They’re all here, too, from “Iron Man,” which is still chilling after all these years, to the eerie “Sabbath Bloody Sabbath” and the crowd favorite “Paranoid.” Ozzy allows the audience to sing along on a wicked rendering of “War Pigs” while other Sabbath favorites also enjoy stellar performances, including “Fairies Wear Boots” and “Snowblind.”

As a result of the band’s impromptu reunion, Ozzy and Tony Iommi penned two new songs, which are tacked on as studio cuts at the end of Reunion. The first, “Psycho Man,” is a taut thriller with concertina wire-sharp guitars and ominously plodding rhythms while “Selling My Soul” offers a sordid tale of madness and confusion – sort of like a sequel to “Paranoid” – that is driven by Ozzy’s trademark wailing vocals. Perhaps a hint of things to come, these two songs showcase that Black Sabbath has forgotten more about “heavy music” than a lot of aspiring metalheads will ever know. A reunion tour is allegedly in the works, with a new studio album possibly not far behind. Regardless, Reunion captures the greatness that is Black Sabbath in concert, maybe not at their fighting prime, but not missing many punches, either. (Epic Records, released October 20th, 1998)