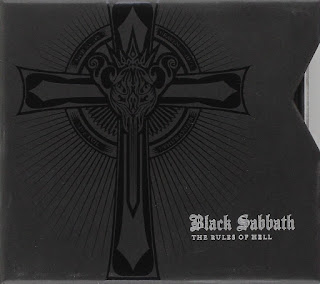 There are only two kinds of Black Sabbath fans on this cold, grey planet – Ozzy acolytes and Dio devotees. Forget about the fleeting tenures of singers Dave Walker, Dave Donato and Ray Gillen, or those horrible records with Ian Gillan, Glenn Hughes, and Tony Martin. And just who the heck is Jeff Fenholt? No, for the true Sab fanatic, it all boils down to the eight albums made with Osbourne circa 1970-79, or the four recorded with Ronnie James Dio between 1979 and 1982.

Black Sabbath's The Rules of Hell


A couple of years ago, Black Sabbath guitarist Tony Iommi reunited the band's Dio-lead line-up under the banner Heaven & Hell, named for their 1980 album, as a way to promote 2006's The Dio Years set. The band recorded three new songs for that compilation, the collaboration resulting in a lengthy tour and a subsequent live recording. To satiate the tastes of those who have come around to Sabbath after experiencing Heaven & Hell, Rhino Records has done their 16-song The Dio Years one better by boxing up all four of the Dio-era Sabbath albums as the five-disc The Rules of Hell set. 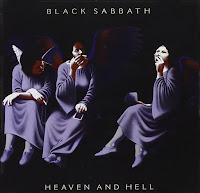 Although the true believer already has most of this stuff, for the casual fan or newbie, The Rules of Hell captures the brief magic of the Dio-years Sabbath in an overflowing treasure chest, the four albums remastered and including newly-penned liner notes. The Heaven and Hell album is the cornerstone of the box, not so much a breath of fresh air after Ozzy as it was a hurricane-force blast, perfectly timed at the dawn of the "New Wave of British Heavy Metal." An influential album that yielded classic songs like "Neon Knights" and "Children of the Sea," Heaven And Hell masterfully paired Iommi's massive, doom-laden riffs with the former Rainbow vocalist's imaginative, fantastic lyrics and unique melodic sense.

Long-time Sabbath drummer Bill Ward left the band due to personal problems, to be replaced for 1981's Mob Rules by former Rick Derringer skin-basher Vinny Appice. The foursome recorded a suitable follow-up to the Platinum™-selling Heaven And Hell, following much the same blueprint, i.e. heavy riffing, scorching fretboard runs, and bombastic rhythms. The album-opening "Turn Up The Night" is a dark, rumbling rocker with histrionic vox, while "The Sign of the Southern Cross" is a Goth-tinged molten doom-stomp that starts life on gossamer wings before emerging from its chrysalis as a light-chewing, flesh-rending carnivore. For Sabbath, Mob Rules was the right album at the right time: capital-H Heavy with plenty of metallic theatrics. 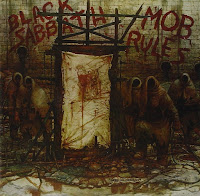 There has always been a lot of discussion among fans over Live Evil, the two-disc concert set unabashedly mixing songs from the two previous studio albums with vintage Ozzy-era gems like "Paranoid" and "War Pigs." The dichotomy was not lost on listeners, and Live Evil retains a muddied reputation among the faithful to this day. Still, there is some quality noggin-knocking to be found on Live Evil. Whether you're grooving to the speeding two-wheeled hog that is "E5150," its tailpipe belching fire as Iommi marks the pavement with his scorched-asphalt six-string garroting, or genuflecting towards the temple of doom that is "Black Sabbath," the band's original signature song, the album delivers enough bone-deep chills and plodding thrills to satisfy even the most couch-bound hesher. There are fourteen songs total on Live Evil, each performance a sign of the impending apocalypse.

When the smoke had cleared after the release of Live Evil, Dio would bolt from the Sabbath ranks in '82 to form his own band; bassist Geezer Butler would depart a couple of years later. A decade passed, heavy metal was seemingly on the ropes, and as both Dio's self-titled band and the Sabs were floundering in the tidal wave emerging from Seattle, the original Heaven And Hell crew reunited for the middling Dehumanizer in 1992. 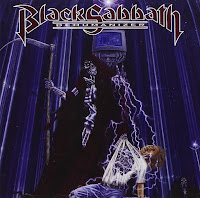 An attempt to re-imagine Sabbath for the confusing alt-rock daze of the '90s, Dehumanizer turned away from the swords-and-sorcery imagery of Dio's earlier work in favor of a Voivod-like struggle between humanity and technology. Although the dour collection illustrates Sabbath at its darkness, and songs like "TV Crime" or "Time Machine" (from the movie Wayne's World) are rife with Appice's cannonball drumbeats, Dio's soaring vocals, and Iommi's 12-gauge blunderbuss approach to riff-playing, the truth is that a dozen other bands did this sort of thing much better at the time, and Dehumanizer sank like a stone, suffering from the same tensions that broke up this incarnation of the band a decade previous.


Dio would return to his solo career, while Iommi continued to carry Black Sabbath on his shoulders throughout the '90s and into the new millennium – even reuniting with Ozzy once upon a time – until the band's current reincarnation. For the crazed and the curious, The Rules of Hell captures every note of the often-overlooked Dio-era Sabbath, taking the listener back to the storied roots of Heaven & Hell, warts and all… (Rhino Records, released July 22nd, 2008)

Buy the CD box set from Amazon.com: Black Sabbath's The Rules of Hell