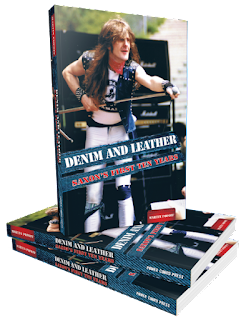 One of the pioneering bands of the “New Wave of British Heavy Metal,” Barnsley’s favorite sons Saxon are still riding the rails 40+ years after forming way back in the pre-metal darkness that was 1977. Amazingly, rock ‘n’ roll lifer Peter “Biff” Byford still fronts the band, and he sings as great as ever, while guitar-slinger Paul Quinn has been along for the ride since day one. The band’s longtime rhythm section – bassist Nibbs Carter and drummer Nigel Glockler – can count their tenure with Saxon in decades rather than years.

It’s the rare band that can boast of keeping two founding members after four decades, much less enjoy the instrumental continuity found in Saxon. For many ‘legacy’ bands these days, it’s usually one old geezer who sniffed the original band’s debut album cover once upon a time, tag-teamed with some younger guy dredged up by management ‘cause he owns a denim jacket. Saxon’s story is fairly unique among hard rock/heavy metal bands and, with Denim and Leather: Saxon’s First Ten Years, writer and music historian Martin Popoff explores the band’s roots and the period of their greatest commercial success.


Popoff is the preeminent authority on all things hard rock and heavy metal, the author of 85+ books (close to 100 by now, I bet…) including artist bios (Mötörhead, Max Webster, Riot, Dio, et al); sprawling, comprehensive multi-volume band histories (Thin Lizzy, Judas Priest, Deep Purple, Black Sabbath); and many more. The former founding editor of Canada’s Brave Words, Bloody Knuckles music zine, Popoff is also a regular freelance contributor to music-related publications like Goldmine and Record Collector (U.K.), among many others. It’s my obligation to mention that Martin is also a friend and colleague, and one of the Rev’s fave rock scribes. 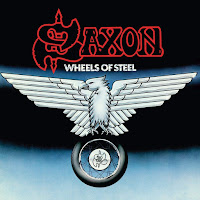 Following the same modus operandi that he has on previous band histories, Denim and Leather covers Saxon’s first decade, an album at a time, with Martin’s critical commentary on the band’s performances interwoven with comments by the band members, past and present, culled from dozens of interviews done by Popoff for each project. It’s an impressively efficient manner to cobble together a history of a band, building upon their own words, and Popoff compliments the album-by-album chapters with four-color inserts that include rare band photos, cover art from albums and picture sleeves from 45s, and hard-to-find band memorabilia.

Although enjoying nowhere near the success of contemporaries Iron Maiden, or even acolytes like Metallica, Saxon has sold more than 13 million records worldwide and their influence on metal giants like the aforementioned Metallica, as well as bands the caliber of Megadeth, Slayer, Anthrax, and Pantera, among others, is indisputable. Popoff begins Saxon’s story in the mid-70s with the band SOB (Son of A Bitch), which featured Saxon’s original line-up, the band subsequently changing its name to Saxon. Opening spots on tours with more established bands like Mötörhead followed and earned Saxon a deal with the French record label Carrere, whose U.K. operation was run by early Saxon supporter Freddy Cannon.

Saxon released its self-titled debut album in 1979 and while it earned a reasonable amount of critical attention, the band was still searching for its sound. Shedding the somewhat ‘proggy’ tendencies of their debut, Saxon struck gold with 1980’s classic Wheels of Steel LP, which would peak at #5 on the British albums chart and launch the band’s career in earnest. In The Collector’s Guide to Heavy Metal, Volume 2: The Eighties, Popoff praised the band’s working-class ethic, calling the album “a qualified classic,” considering it “one of really two or three NWOBHM building blocks.” Saxon followed up their breakthrough disc in late 1980 with Strong Arm of the Law, an album that many fans consider to be the band’s best. 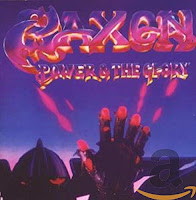 Expectations were high for Saxon’s fourth album and, for many fans, 1981’s Denim and Leather didn’t disappoint. Although critical reception for the album was mixed, it still peaked at #9 on the British charts and helped introduce the band to a legion of new fans in the U.S. It would also be the last album to feature original drummer Peter Gill, sidelined by a hand injury and replaced by Nigel Glockler, a veteran of British singer Toyah’s touring band. Glockler joined Saxon in time to record the live stopgap LP, The Eagle Has Landed, which was an unqualified success (peaking at #5 on the U.K. charts).

The band sojourned to Atlanta, Georgia to record Power & the Glory with American producer Jeff Glixman, who had worked with Kansas and Gary Moore, among others. Popoff praised the addition of Glockler to the band’s line-up, stating that the drummer’s contributions to the album helped create “a metal magic that is the embodiment of the NWOBHM’s ideals now made real.” Considered the third of the band’s classic albums, Power & the Glory only rose to #15 on the U.K. charts but inched its way into the upper reaches of the U.S. charts and allowed the band to tour stateside with some success. Although it sold well enough, 1984’s Crusader found the band vying to stay relevant amidst the growing glut of nerf-metal bands like Mötley Crüe, Ratt, and Poison.

Saxon jumped into the major leagues with 1985’s Innocence Is No Excuse, the band’s first album for EMI Records’ Parlophone imprint after falling out with Carrere Records. Recorded in Germany, it was the last album with original band bassist Steve Dawson, and would be met with mixed feelings by the band’s fans. In The Collector’s Guide to Heavy Metal, Volume 2: The Eighties Popoff called the album a return “full-steam to the bastions of metal, without an idea in their dust-clouded heads” and, indeed, the album represented a turn in the band’s commercial fortunes. Increasingly saddled with inappropriate producers and sub-par material, the band’s following EMI albums – 1986’s Rock the Nations and 1988’s Destiny – would underperform and, worse yet, failed to build upon the band’s growing U.S. popularity.

Dropped by EMI, the band added permanent bassist Nibbs Carter who, a decade or more younger than his bandmates, brought a renewed energy and creative perspective to Saxon that is reflected in the band’s second live set, 1989’s dynamic Rock ‘n’ Roll Gypsies. It’s here that Popoff basically ends his narrative, a decade of music neatly wrapped up in roughly 240 pages. An epilogue quickly covers the band’s subsequent 30 years of history, but it’s this first decade that is truly explored in depth by Denim and Leather. Popoff’s writing technique and attention to detail paints a comprehensive portrait of the band’s creative process, the recording of each album, and the band’s touring experience.


Although Byford is the dominant voice in Denim and Leather – much as he is within the band – Popoff provides the other band members, past and present, plenty of room for their own observations. While interpersonal conflicts between Saxon’s original members are explored in depth, with commentary from all parties, more illuminating is the band’s interaction with the diverse group of producers they worked with over the course of their first decade.

Overall, Denim and Leather is another excellent job done by Popoff, whose insights and knowledge of the bands he writes about allows him to solicit vital perspective from a band’s members, resulting in what amounts to the definitive work on their careers (outside of their music, of course). Saxon may not be as well-known to U.S. audiences as fellow NWOBHM outfits like Iron Maiden or Def Leppard, but longtime fans will delight in this in-depth biography of the band’s early era and, given a positive enough response (and sales), Martin might be persuaded to pen a second volume… (Power Chord Press, published April 2020)

Find out more about Denim and Leather at www.martinpopoff.com