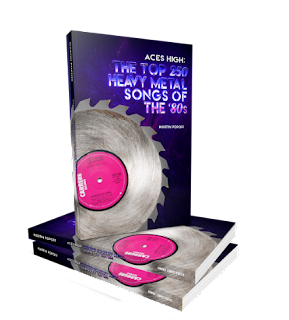 The preeminent authority on all things hard rock and heavy metal, writer and music historian Martin Popoff is the author of 85+ books (and counting); the former founding editor of Canada’s Brave Words, Bloody Knuckles music zine; and a regular freelance contributor to music-related publications like Goldmine, Revolver, and Record Collector (U.K.), among many others. Martin is also a friend and colleague – a fact, in spite of which, he might still think that the Rev is a little crazy (not so…my mother had me tested!).


With Aces High: The Top 250 Heavy Metal Songs of the ‘80s, Popoff asked his massive worldwide readership to help with some of the ‘heavy’ lifting (no pun intended). Returning to an idea that resulted in his 2018 book Riff Raff: The Top 250 Heavy Metal Songs of the ‘70s; Popoff polled his thousands of followers, Facebook friends, and assorted ne’er-do-wells as to their fave tunes from the heavy metal decade of the ‘80s. He subsequently pared this list of hundreds of songs down to a more manageable 250 selections. Although there is endless conversation as to “who invented heavy metal?” (as I mentioned above, Martin even wrote a book about it…) and when the genre actually took off as a critical and commercial force, there’s no arguing that the ‘80s was rich with all things metal. Thrash, speed, death, hair, prog…no matter your taste in all things metallic, there’s something in these pages for you!

So, Popoff counts down this particular Top 250 from the last entry (Dio’s “Sacred Heart”) to the first (you’ll have to buy the book to find out, bunkie!), each selection accompanied by Martin’s pithy commentary, which often adds a bit of history to the song, as well as quotes from those that made the music, artists and band members that Popoff has interviewed throughout his three decades in the trenches. This format is light and breezy, making for an entertaining read, and the text is supported by hundreds of unique band photos and picture sleeve graphics from those rare 7” slabs o’ wax on which the songs were originally released. The 1980s were a heady period and not without a few challenges, and Popoff touches on “satanic panic,” the PMRC and record censorship, and other cultural flotsam and jetsam of the decade.


Aces High: The Top 250 Heavy Metal Songs of the ‘80s is a helluva lot of fun, and for any music fan, it’ll dredge up memories of half-forgotten tunes and send the reader scurrying to their record collection to pull out dusty vinyl and revisit these songs. I was really surprised at the diversity of the artists represented in the book; sure, the expected heavyweights of the ’80s are here, with songs by Ozzy Osbourne, AC/DC, Metallica, Def Leppard, Mötley Crüe, Iron Maiden and a handful of others all deservedly highly-rated. But Martin’s readers are a discerning bunch, and there are more than a few molten metal obscurities among the Top 250, bands like Savatage, Venom, Mercyful Fate, Armored Saint, and King’s X the province of the dedicated, hardcore fan. Popoff has done an admirable job in stripping down the music to its creative core – the individual song – reminding the reader of why they love this stuff in the first place. Grade: A (Power Chord Press, published April 2019)

Buy the book directly from the author (tell him the Rev sent ya!)