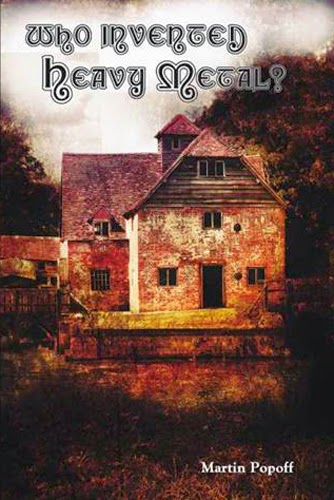 Writer Martin Popoff is a buddy of mine, a respected colleague in the dark art of rock criticism, and a rabid music fan who has forgotten more about heavy metal music than most of us will ever know. Popoff is the former editor of Brave Words & Bloody Knuckles magazine, and the author of almost four-dozen books on hard rock and heavy metal (including seminal texts on classic bands like Rainbow, Thin Lizzy, Deep Purple, and UFO). He’s also worked as a consultant on the VH1 Classic documentary series Rock Icons and Metal Evolution.

Popoff’s latest tome is Who Invented Heavy Metal?, an erudite discussion of the roots of metal music that begins with rock ‘n’ roll’s origins in the 1950s and ends in 1971 after the release of influential and classic albums by Black Sabbath, Deep Purple, and Uriah Heep. A thought-provoking effort, the book was written to appeal to more than the obvious metalhead audience, and Who Invented Heavy Metal? promises to be an entertaining and informative read for any rock music fan.

In a press release for the book, Popoff says, “folks, this was a monster undertaking, comprising quotes from 126 different speakers (mostly the metal-makers themselves), many of them interviewed multiple times, blasted at you with much of my own contextualizing over 120,000 words of oral history, strict and detailed timeline, obsessive philosophizing, punctuated by more than 250 graphics. This book arose from years of debating this question with people, as well as talks I’ve given on the topic at university conferences. I’ve endeavored to include everything related to the story, the result being a massive arrangement of all the salient arguments, in a weighty tome that ends in 1971!”

Who Invented Heavy Metal? can be ordered directly from Popoff through his website, where you can also find information on his many other books. I’d personally recommend Martin’s three-part series on Thin Lizzy or any of his Ye Olde Metal books, but as Popoff is a knowledgeable and passionate writer, you can’t go wrong with any of his books (and I own a bunch of ‘em!).
Posted by Rev. Keith A. Gordon at Friday, May 01, 2015