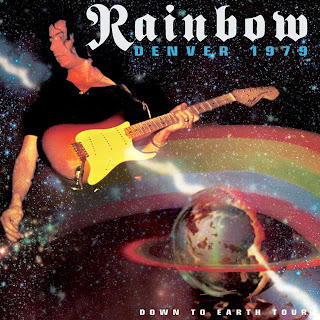 There have been a few live Rainbow albums trickle out from the archives over the past few years, almost all of ‘em showcasing the ground-breaking, earth-shaking Ronnie James Dio era of the band when guitarist Ritchie Blackmore’s influential outfit Rainbow trotted across the musical landscape like a proud T-Rex. After Ritchie and Ronnie James went their separate directions, however – Dio moving on to a superb solo career – Rainbow regrouped with one of the best line-ups of the band's lengthy run. Fronted by the leather-lunged Graham Bonnet and including bassist Roger Glover (Blackmore’s former Deep Purple bandmate), keyboardist Don Airey (from Coliseum II), and journeyman drummer Cozy Powell.

This is the group that would record the band’s breakthrough LP, 1979’s Down To Earth, which yielded a minor hit in its energetic cover of Russ Ballard’s “Since You Been Gone.” Bonnet was a different sort of beast than Dio, his vocals leaning more towards a lean hard rock sound whereas Dio favored a soaring, symphonic approach to the material. With the new band members finding an easy chemistry, this era of Rainbow delivered a hard-rockin’, proto-metal sound that was FM radio-friendly and arena ready. The tour in support of Down To Earth was legendary, pulling material from all four of the band’s albums as well as featuring a massive, awe-inspiring light show.

The Down To Earth era of Rainbow has been severely underrepresented by live material, however, an oversight partially remedied by Cleopatra Records and the May 26th, 2015 release of Denver 1979 on glorious colored vinyl. The full-length, double-disc set will be available in your choice of three different colors of wax – red, green, or blue – and packaged in an eye-popping holographic foil gatefold jacket. There are only seven songs, but they’re long ones, with plenty of room for the band to stretch out and jam, and Denver 1979 includes performances of several of the band’s most popular tunes, including “All Night Long” and “Since You Been Gone” from Down To Earth as well as “Man On The Silver Mountain” and “Long Live Rock N Roll.”

On August 21st, 2015 Cleopatra will revisit the Bonnet era of Rainbow with the release of Down To Earth Tour 1979, a deluxe three-CD box set that features full-length concert recordings from Denver, Long Island, and Chicago, taken from radio broadcasts and each packaged in an individual sleeve. Aside from a helluva lot of great music, the box also includes a bunch of goodies that will have the hardcore Rainbow fan salivating, including a 1” color button, an embroidered fabric patch, a Ritchie Blackmore signature guitar pick, and a combo bottle opener/keychain, all packaged in a red-velvet lined box. Mighty swanky swag, but it’s the music that’s going to sell this one, with longtime fans finally able to get a taste of Rainbow’s 1979 tour on disc.

(Fun facts: Rainbow opened for Blue Oyster Cult during the first leg of their 1979 U.S. tour, headlining the second half of the tour with opening acts like John Cougar (!), Gamma, Scorpions and, in the Detroit area, the mighty Cub Koda!)

Ironic factoid not mentioned - This Rainbow concert was at the infamous Rainbow Music Hall in Denver.