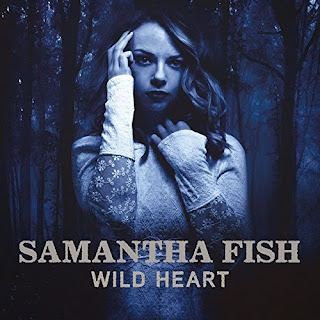 She’s one of the brightest and most talented young blues artists coming up in the scene today. On July 10th, 2015 the world will receive further evidence of her talents when Ruf Records releases Wild Heart, the third album from singer, songwriter, and guitarist Samantha Fish.

To prepare for Wild Heart, Fish journeyed to Nashville to write with songwriter Jim McCormick, whose songs have been recorded by Trisha Yearwood and Keith Urban. The New Orleans native provided the experience and musical knowledge to allow Fish to fully express herself, and the pair wrote five of the twelve songs on the album, including blues-rock tune “Show Me,” the raucous tale of betrayal “Road Runner,” and the riffish title track. The trip from Louisiana to Mississippi and the Zebra Ranch Studios allowed the young guitarist to experience some flavor of the birthplace of the blues.

In Mississippi she cut a cover of Charley Patton’s “Jim Lee Blues, Part One,” with Hill Country guitarist Lightnin’ Malcolm and drummer Sharde Thomas, granddaughter of Mississippi fife/drum legend Otha Turner. “This session had a whole other vibe to it,” Fish says in a press release for Wild Heart. “The studio is out in the country, no cell service, no distractions. You're just surrounded by nature and guitars.” Fish first met Malcolm when she attended the King Biscuit Blues Festival when she was 17 years old. “Working with Malcolm was a longtime coming as I'd known him since I was a teenager. Hearing hill country blues made me fall in love with blues music and he was one of the first artists who let me jam with him.”

Still in her mid-20s, Fish already has two critically-acclaimed albums under her belt – 2011’s Runaway and 2013’s Black Wind Howlin’ – both produced by bluesman Mike Zito. She was honored with a “Best New Artist Debut” Blues Music Award for Runaway, and she’s shared stages with legends like Buddy Guy and Tab Benoit. Wild Heart is further proof of her talent and dedication to the blues; you expect to hear a lot more from Samantha Fish as the years go by.