CD Preview: Sly & the Family Stone' Live at the Fillmore 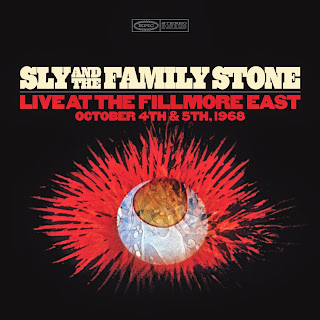 There’s some significant overlap between the two nights and across all four discs, each of which contains an entire performance – you know that Sly was going to play the band’s big hit, “Dance To The Music” every night – and, indeed, it’s here four times, as are great songs like “M’Lady” and “Color Me True.” But there are also some other individual gems to be found among the 34 performances on the box set, and while I haven’t heard it yet, it’s a sure bet that there’s some subtle shading and differences in the performances from show to show.

In late ’68 Sly & the Family Stone were building a well-deserved reputation as a dynamic, high-energy live band, and Live At The Fillmore East will be a fine addition to the collection of any funky fan.