The Boomtown Rats – Live In Germany ‘78 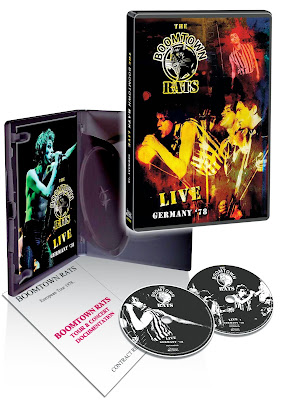 The Boomtown Rats never really caught on stateside as they did in the U.K. Formed in Ireland in 1975 by singer Bob Geldof and guitarist Garry Roberts, the Rats were really more of a pub-rock outfit than anything else. Influenced by bands like Dr. Feelgood, the Rolling Stones, and the Who, the Rats delivering stripped-down, raw, unadorned rock ‘n’ roll that pre-dated the British punk scene with which they’re most firmly identified (although they’re also categorized as a “new wave” band…go figure!).

While the Rats’ best-selling U.S. album – 1979’s The Fine Art of Surfacing – peaked at #103 on the Billboard album chart due to the MTV exposure provided the single “I Don’t Like Mondays” (which, criminally, only hit #73 stateside), the Rats scored ten straight hit singles in the U.K., including two number ones, and their first four albums charted in the top twenty in their homeland.

Their lack of U.S. recognition aside, the Boomtown Rats were a damn fine rock band circa 1977-1981, with a brace of solid album releases to their credit. In addition to the aforementioned The Fine Art of Surfacing, the band’s self-titled 1977 debut and the following year’s A Tonic For The Troops (with the cool, Springsteenesque jam “Rat Trap”) displayed a punkish energy and traditional rock influences that sound as fresh and vital today as they did almost 40 years ago. As the band became more accomplished with subsequent albums, their sound would lose the rough edges and take on more artful flourishes. Eventually, the Rats would be overshadowed by the personality and public persona of their frontman, and they’d break up in the mid-1980s.

Damn, those early Boomtown Rats albums rocked hard though, the late 1970s a prolific and productive time for a band whose talents are too often overlooked in favor of contemporaries like the Clash or the Jam. Sadly, few live recordings of the band in its prime have been released. On June 8th, 2015 our friends at Gonzo Multimedia will release Live In Germany ’78, a two-disc DVD/CD set that features thirteen previously-unreleased, high-octane performances from the band’s storied 1978 world tour.

Surprisingly, Live In Germany ’78 is light on tunes from Tonic, the band’s album at the time, featuring only the U.K. hit single “She’s So Modern” from that disc. The bulk of this live set comes from the band’s fine debut LP, including their first hit single, “Looking After No. 1,” and its follow-up hit, “Mary of the 4th Form.” The Rats knock out eight of nine songs from their debut here, as well as a trio of very cool non-album B-sides like “Do The Rat” and “It’s All The Rage” which, to the best of my knowledge, have never appeared on a Boomtown Rats album previously.

The band at the time – Geldof, guitarists Roberts and Gerry Cott, bassist Pete Briquette, keyboardist Johnnie Fingers, and drummer Simon Crowe – were a dynamic outfit with a great chemistry, so this live set should rock the rafters and provide further evidence that the Boomtown Rats were one of the best bands to emerge from the heady and talented U.K. rock scene of the 1970s.