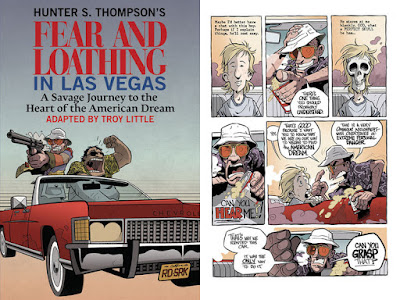 “What were we doing out here...? What was the meaning of this trip? Did I actually have a big red convertible out there on the street? Was I just roaming around these Mint Hotel escalators in a drug frenzy of some kind, or had I really come out here to Las Vegas to work on a story?” — Hunter S. Thompson, Fear and Loathing in Las Vegas

This may well be the perfect pairing of a classic work of literary art and, well, visual artwork – in October 2015, Top Shelf Productions will release a graphic adaptation of legendary writer Hunter S. Thompson’s Fear and Loathing in Las Vegas as a full-color graphic novel. Thompson’s gonzo tale of a memorable trip to the desert city is illustrated by Eisner-nominated artist Troy Little. The adaptation is said to be faithful to Thompson’s original work, and Little – winner of a Xeric award for his graphic novel Chiaroscuro and nominated for an Eisner award for his series Angora Napkin, “brings a new level of manic energy to Thompson’s rocket-fueled narrative” according to a press release for the book.

Originally published in 1972, the story of Fear and Loathing in Las Vegas is a tale in and of itself. Working on a separate story for Rolling Stone magazine, Thompson traveled to Vegas with Mexican-American activist attorney Oscar Zeta Acosta to get away from L.A. and do research for the article. Thompson took advantage of a paid assignment by Sports Illustrated covering the Mint 400 motorcycle race in Vegas as a way to underwrite the trip. What was originally supposed to be a 250-word photograph caption ballooned into a 2,500-word story that the magazine quickly rejected. 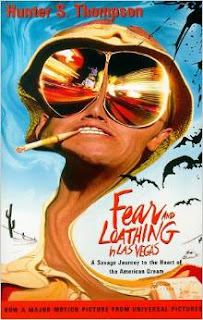 Thompson’s fictionalized story of the Vegas trip subsequently appeared, with illustrations by artist Ralph Steadman, as a two-part series in Rolling Stone in late 1971. It was published in book form the next year by Random House as Fear and Loathing in Las Vegas: A Savage Journey to the Heart of the American Dream with additional illustrations by Steadman.

The based-on-a-true-story tale was written as a first-person account by Thompson’s alter-ego Raoul Duke, a journalist who is accompanied by his “300-pound Samoan attorney” Dr. Gonzo (i.e. Acosta) to Vegas. The two cover the motorcycle race, crash a narcotic’s officers’ convention while blasted on mind-altering drugs, and manage to rack up an obscene room service bill. The book would become Thompson’s best-known work, and was adapted to film in 1998 movie starring Johnny Depp. The 1980 film Where The Buffalo Roam, starring Bill Murray, was based on a number of Thompson stories, including Fear and Loathing.

The graphic novel version of Fear and Loathing in Las Vegas runs 176 pages and will be published by Top Shelf as a 6”x9” hardback book with a cover price of $24.95. If you’re a Thompson fan, you’re going to want a copy of this one for your gonzo bookshelf!
Posted by Rev. Keith A. Gordon at Thursday, May 28, 2015