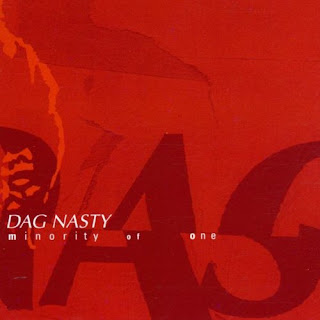 Given the time between Dag Nasty albums, you’re more likely to witness a total eclipse of the moon, or maybe get hit by a wandering comet, than you are to hear a new album from the band during your lifetime. Maybe we live in charmed times, or perhaps the stars are in perfect alignment, ‘cause the legendary punk outfit has dropped its first disc in a decade with the extraordinary Minority of One.

Fronted by former All vocalist Dave Smalley and Minor Threat/Meatmen axeman Brian Baker, Dag Nasty has released only a handful of albums since the classic 1986 debut Can I Say. Since Dag Nasty’s last effort, 1992’s overlooked Four On the Floor, the band members have been busy – Smalley with his vocal chores for Down By Law and Baker as Bad Religion’s resident six-string maniac. With Minority of One, tho’, the founding fathers of “emocore” have whipped up a new batch of fab tunes certain to whip the punk rock kids into a veritable frenzy.

Dag Nasty’s Minority of One


Minority of One slaughters the so-called “competition,” leaving bands like Dashboard Confessional and the Promise Ring in its wake. The musical gorefest kicks off with “Ghosts,” a high-voltage rocker that reminds us that the past can come back to haunt us, while the anthemic title cut sounds more than a little like Bad Religion. With screaming guitar riffs, crashing rhythms, chanted vocals and non-conformist lyrical perspective, “Minority of One” delivers a little classic “rant ‘n’ roll” for the attentive listener. Smalley’s passionate vocals and the fresh lyrics of “Broken Days” breathe new life into a poetic cliché, a mournful tale of love and betrayal. “Incinerate” is an old-fashioned love song, defiant lyrics matched with a dynamic chorus and Baker’s jagged-edge axework.

The powerful “Wasting Away” is both a lyrical call-to-arms for fresh blood to pick up the “tattered flag” and a deep cut at the hardcore Cassandra’s who would rather bitch about society than try to improve it. Crackling with electricity, “Wasting Away” offers Dave Smalley’s best Greg Graffin vocal imitation while Baker’s dubbed six-string sounds like a guitar army marching to battle alongside bassist Roger Marbury and drummer Colin Sears’ rhythmic artillery division. It’s a smart song, drawing the line in the sand for the next generation of punk rockers to cross. A hidden track sneaks up at the close of Minority of One, a Dag Nasty customized cover of Generation X’s “One Hundred Punks” featuring Baker’s best frantic, class of ’77 styled guitar performance and Smalley’s snarling Billy Idol-inspired vocals.


Although Dag Nasty will remain an afterthought for its members in the face of their various day jobs, Minority of One is nevertheless a potent musical statement. With top notch songwriting and an undeniable musical chemistry bolstered by inspired performances, Dag Nasty has delivered a career album that pairs the maturity of the member’s present stations with the youthful energy and fierce enthusiasm of their youth. Sixteen years in the making, Minority of One is one of the year’s standout efforts. (Revelation Records, released August 20, 2002)

Buy the CD from Amazon.com: Dag Nasty’s Minority of One