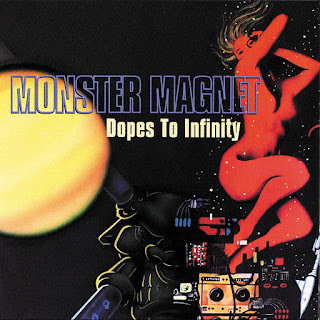 What the 1990s are lacking, if I were to inject my two cents worth here, is a truly HEAVY rock ‘n’ roll band. Sure, there’s grindcore, death metal, and metallic rap; punk rap and hardcore punk, and a dozen other variations on the old guttural vocals/loud ‘n’ fast guitars and monster rhythm combo, but there's no really, really HEAVY rock outfit...the kind of stuff that an early Bob Seger (before he hit middle age and senility) used to call “Heavy Music.”

After all, the ‘60s had Dust, Sir Lord Baltimore, and Vanilla Fudge and the ‘70s had Led Zeppelin, Hawkwind, and the mighty Black Sabbath. Even the ‘80s – the great cesspool that was the Reagan era – produced semi-heavy bands in Metallica, Slayer, and the rest of Tipper’s demon-inspired nightmares. Kids these day have nobody to call their own, no righteous headbangers that they can tell tales to their grandchildren about – “well, chilluns, I remember the night that we pried Ozzie up off of a hardwood floor in a West Nashville bar and propped him in front of a mike. Sabbath rocked so hard that they were wheeling them out of the auditorium in iron lungs!”

With the best interests of these young ones at heart, I’d like to nominate Monster Magnet for the open position of the “Heaviest Band of the 1990s.” Dopes To Infinity, their latest effort, comes mighty close to recreating the magic that all of those aforementioned bands brought to their ‘heavy’ creations. First of all, they’ve got a great name, one that would look good on a patch or a school notebook (and that’s important!). Secondly, they've got great song titles – stuff like “Negasonic Teenage Warhead” or “Look To Your Orb For The Warning” or, lest we forget, “Ego, The Living Planet.”

Most importantly, as we used to say once upon a time, Dopes To Infinity kicks out the jams with a dozen powerful, psychedelic-tinged rock tunes. Thunderous, spacey, hypnotizing, and capital-H Heavy, Monster Magnet are no mere pretenders to the throne, but rather real contenders for the crown. (A&M Records, released March 21, 1995)

Buy the CD from Amazon: Monster Magnet Dopes To Infinity