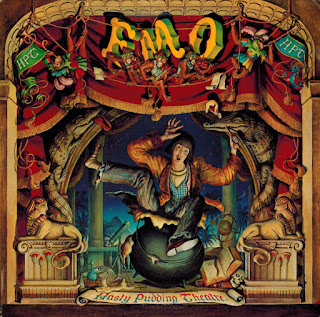 Comedy is entirely a matter of personal taste, comedy recordings doubly so. Informed criticism of either is somewhat futile and not unlike dancing upon the edge of a well-oiled razor blade, albeit a rather large razor blade. What one person may consider leg-wetting, liver-quivering funny may seem incredibly droll and boring to the next person…all of which, in a round-about way, is my manner of introducing you, gentle reader, to the somewhat slightly strange work of Emo Philips.

You may have seen Emo on Letterman’s show or, perhaps, on one of the many pay-cable networks which seem to dote on young comics these days. If you’ve never seen Mr. Philips – a tall, gaunt fellow with an anachronistic pageboy haircut and a strained, sing-song delivery – you’d never forget him. Emo is one sick puppy. His shtick is a curious mix of introverted self-criticism, audience-shared personal experience, and intellectual absurdity; in short, an artist requiring an acquired taste.

Live From the Hasty Pudding Theatre is Philips’ second record, recorded at Harvard’s legendary Hasty Pudding Theatre, a living shrine to theatrical farce, a location well-suited for Philips’ style of comedy. The material here is consistently off-the-wall, the jokes quick and fleeting, dealing mostly with Emo’s day-to-day existence. The humor is more than a wee bit cerebral, with intellectual broadsides and odd non-sequiturs flying freely. At his best, Philips is a mirror reflecting the various quirks and eccentricities of our society; at his worst, he is merely strange. This is an enjoyable album, if not uproariously funny, but rather the sort of comedy record which yields a fresh dimension of thought with each listen… (Epic Records, 1987)

Buy the CD from Amazon: Emo Philips’ Live From the Hasty Pudding Theatre