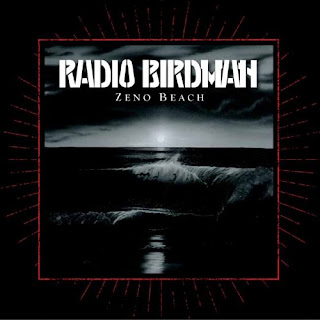 Australia’s Radio Birdman is possibly the first punk band to earn mythical status not on the strength of their music, but rather on their obscurity. The exposure of the average American rocker to Radio Birdman’s blistering late ’70s punk has come solely through a single compilation, The Essential Radio Birdman: 1974-1978. The band’s influence on a generation of Australian artists following in their footsteps cannot be understated, however, with every Oz band of note over the past 20 years – Celibate Rifles, the Screaming Tribesmen, Hoodoo Gurus, and many others – tapping into the Birdman spirit in one form or another.

While the prospects of a Radio Birdman reunion at this late date seemed a bit spotty, Zeno Beach, the album resulting from the reassembled band, is much better than it has any right to be. Recruiting original Birdman shouter Rob Younger – an ingredient essential to any successful reinvention of the band – and calling up mates Chris Masuak and Pip Hoyle, Deniz Tek managed to assemble two-thirds of the original Birdman lineup, adding a couple of new friends to the mix. The chemistry of the newfound band is incredible, adding a fresh layer of grime and grunge to the band’s classic high-flying punk roots.

Detroit-born Tek’s fascinations with the Stooges and the MC5 can still be heard in the songs, but they don’t dominate the proceedings as they once did. Younger’s amazing vocal range – he sounds like Robert Smith of the Cure one moment, like Iggy after a three-day binge the next – is supported by the dueling guitars of Tek and Masuak and a solid rhythm section. The result is a classic, timeless rock ’n’ roll album, bristling with energy and attitude and driven by screaming guitars that channel four decades of garage-bred roots into 45 minutes of near-perfect Marshall flash. (Yep Roc Records, released August 22, 2006)