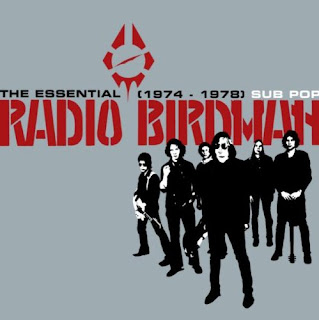 The Saints may be Australia’s best-known punk export, but for this scribe’s hard-earned cashola, I’d choose Radio Birdman as the more raucous of the two. Formed by American expatriate Deniz Tek – born in Michigan and weaned on the Stooges and the MC5 – Radio Birdman lasted for just four years and a handful of albums. They were skewered by the notoriously effete British music press and their single U.S. album release was widely ignored. Throughout it all, the band has lived on through rare recordings and bootlegs, building a devoted cult during the past two decades that rivals that of similar high-energy outfits like the Dictators or New York Dolls.


The Essential Radio Birdman (1974-1978) should appeal to even the most dedicated of collectors. The compilation offers all the songs from both the Australian and U.S. versions of the band’s excellent 1978 debut album Radios Appear as well as their 1981 follow-up, Living Eyes (recorded in 1978). Two songs are provided from the original self-produced 1977 EP Burn My Eye, the album closing with three live tracks from a 1977 performance. Fully 12 of the 22 tracks collected on The Essential Radio Birdman (1974-1978) have never been released officially in the United States.

So what is it about Radio Birdman that attracts such fanatical acolytes? It’s a curious mix of American roots-rock, the madness of late 1960s Detroit bands like the Stooges, Up, SRC, and the MC5 and the peculiar Australian perspective created by residing at the end of the earth. When Deniz Tek moved to Australia in 1972 to study medicine, he brought with him the spirit of the slash-and-burn six-string style of Wayne Kramer and Fred “Sonic” Smith. Matched with fellow guitarist Chris Masuak’s metalstorm fretboard technique and surfer Rob Younger’s tortured howl, Radio Birdman cranked up the volume and kicked out electric jams that energized a generation of Aussie musicians behind them.

Tek’s lyrics were street-smart and darkly poetic, seeped in Velvet Underground imagery and Motor City sensibility; tuneage like the desolate “Murder City Nights” or the nostalgic “I-94” rock with a primal passion and fury that was shared by just a handful of mid-‘70s bands. “Aloha Steve & Danno” makes good use of the Hawaii Five-O TV show theme, pairing it with the band’s destructive twin guitars and pop-influenced rhythms while “Alone In the Endzone” echoes the Doors, featuring razor sharp riffs and Younger’s Morrison-like vox. Radio Birdman threw elements of three-chord rock, electric blues, and metallic drone into the creative blender and came up with a powerful, no-frills sound that resonates as loudly in 2001 and it did in 1977.


If you listen to the Dictators, the New York Dolls, Johnny Thunders & the Heartbreakers, the Flamin’ Groovies, Sonic Rendezvous Band, the Streetwalkin’ Cheetahs, or any other devotees of the Detroit rock sound, then you owe it to yourself to discover Radio Birdman. The Essential Radio Birdman (1974-1978) is a hard-rocking introduction to this sadly overlooked band, a great collection of classic punk rock tuneage from “Down Under” that should appeal to new and old Radio Birdman fans alike. (Sub Pop Records, released July 17, 2001)