Archive Review: The Yayhoo’s Fear Not the Obvious (2001) 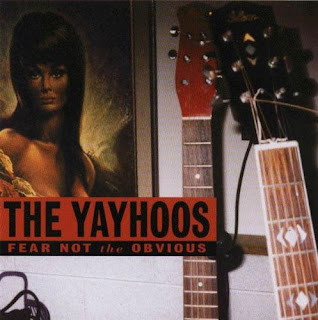 Among contemporary rock bands, you’d have to look far-and-wide to find one that is as gloriously unconcerned about “hipness” or “commercial potential” as the Yayhoos. A loose-knit collaboration between former Georgia Satellite Dan Baird, Eric Ambel of the Del Lords, drummer Terry Anderson, and bassist Keith Christopher, the Yayhoos are the ultimate pick-up band. A throwback to a simpler, more pleasing rock era, the foursome genuflect towards a musical altar that rejects modern rock style in favor of classic Chuck Berry riffs and Rolling Stone rhythms. The band features four distinctive vocalists, songwriters and multi-instrumentalists and the whole motley bunch look a little too scruffy to be accepted by the MTV crowd or snobbish big city elitists.

The Yayhoo’s Fear Not the Obvious


The Yayhoos’ brief mid-‘90s existence resulted in a handful of tracks placed on alt-country compilations and their full-length Fear Not the Obvious LP, shopped around to major label indifference before emerging on the Bloodshot Records label. On this fine collection of songs, the Yayhoos deliver shameless roots-rock and electric twang, served straight up with no chaser for the unabashed blue collar headbanger who wants his musical tonic loud and uncluttered by fleeting fashion. Call Fear Not the Obvious “town and country” music, the songs here mixing Ambel’s Del Lords-inspired NYC guitar riffs with Baird’s country-styled redneck rock.

The four Yayhoos divvy up the songwriting duties, creating tunes that range from the dark-hued swamp rock of Baird’s “Wicked World” or Anderson’s British Invasion influenced “Hunt You Down” to the ‘60s-styled pop of Ambel’s hilarious “Baby I Love You.” “Monkey With A Gun” is a big beat rock ‘n’ roll tale of madness on the road complete with twin guitars and Ambel’s understated vocals while “Oh! Chicago” is a rollicking 90mph romp through Little Feat territory. The band closes Fear Not the Obvious with an inspired cover of Abba’s “Dancing Queen,” offering a different spin on the EuroPop origins of the classic radio hit.


If your idea of rock ‘n’ roll cheap thrills includes the Faces, the Stones, CCR, the Georgia Satellites, and similar outfits, then the Yayhoos are right up your alley. Blazing guitars, foot-stomping rhythms and unpretentious songwriting make up Fear Not the Obvious in its entirety, the Yayhoos a welcome respite from manufactured pop and cookie-cutter modern rock. (Bloodshot Records, released August 7, 2001)