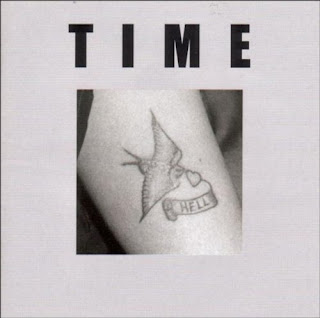 Young punk rockers that would like to find out more about the roots of their passion should seek out the wellspring from which punk first bubbled forth. In this case, I’m referring to Richard Hell, one of the most underrated and overlooked of the punk godfathers. An important member of not one, but three, seminal punk outfits, Hell’s influence on rock music, punk attitude, and street fashion should not be ignored. The odds-n-sods collection Time is a long overdue career retrospective for Hell, delivered, appropriately enough, in glorious lo-fi rock ‘n’ roll sound.

Born Richard Meyers in Lexington, Kentucky, Hell grew up in the sleepy Bluegrass State listening to British Invasion rock and Southern soul. He found a kindred spirit in Tom Miller (née Verlaine), and the pair would soon end up together in New York City. They would form the Neon Boys in 1971, a proto-punk outfit inspired by the Stooges and Velvet Underground, with Verlaine on guitar and Hell picking up the bass. The Neon Boys would evolve into Television and become an integral part of the mid-‘70s NYC music scene growing up around the CBGB club and including bands like the Ramones and Blondie. 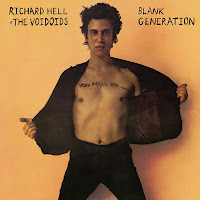 Chafed at his role in the band, Hell left Television before they recorded their classic debut, Marquee Moon, hooking up with former New York Dolls guitarist Johnny Thunders and drummer Jerry Nolan to form the Heartbreakers. Hell would again leave the band before recording, this time striking out on his own. Fronting a band that included guitarists Robert Quine and Ivan Julian and future Ramones drummer Marc Bell, Richard Hell & the Voidoids recorded what is arguably the most important song in the punk rock canon, “Blank Generation,” for their 1977 debut album of the same name.

With his torn clothing, nihilistic lyrics and snotty attitude, Hell became the blueprint of punk rock to follow. The Voidoids would record only one more album – 1982’s Destiny Street – but the band’s influence on a generation of punk rockers was set in stone. Hell would later play in other bands, write poetry and, in 1996, issued his first novel, Go Now, but he would never again pursue music with any sort of ambition. The first disc of the two-CD set Time pairs a previous, cassette-only collection, R.I.P. The ROIR Sessions, with a number of unreleased tracks, including the original version of the Richard Hell/Dee Dee Ramone song “Chinese Rocks,” performed here by the Heartbreakers. Four Heartbreakers demos kick off Time, including “Love Comes In Spurts,” which would be revisited by Hell on the first Voidoids disc. 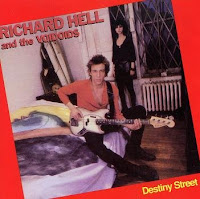 Two early Voidoids’ demos follow, each song featuring the individual virtuosity of guitarists Quine and Julian. A different Voidoids line-up is featured on half-dozen tracks from 1979, drummer Bell having left to join the Ramones. The highlights of this middle passage include Hell’s philosophical take on life revealed by an obscure alternate take of “Time,” the Dylan cover “Going Going Gone” and the live at CBGB song “Funhunt,” taken from the ROIR Records release. Another live track, capturing a 1983 Atlanta performance of “I Can Only Give You Everything,” showcases a later-day Voidoids roster while the disc closes with what are possibly the final Voidoids demo recordings, made in 1984 in New Orleans.

The second disc of Time, collecting unreleased live performances by the Voidoids, is what has punk collectors salivating. The first half-hour plus set includes raw performances of Blank Generation era Voidoids from a 1977 performance at London’s Music Machine. All the band favorites are thrown out here, from “Love Comes In Spurts,” “Liars Beware” and “Blank Generation.” A cover of “I Wanna Be Your Dog” includes Hell’s barks and Quine’s scorched earth six-string riffs. An angry encore, a cover of the Stones’ “Ventilator Blues,” was chosen to piss off a confrontational audience, explains Hell in the extensive liner notes.

The sound quality equals that of a mediocre bootleg, but the passion and fire of the performance is priceless. The last four tracks on disc two of Time, taken from a 1978 benefit for St. Mark’s church held at CBGB, include an original take on “The Kid With the Replaceable Head” (later recorded for Destiny Street) and “You Gotta Lose,” featuring Elvis Costello on vocals and guitar. Time closes with another Stones’ cover, “Shattered,” performed by the Voidoids just this one time.


The significance of Richard Hell’s influence on punk rock cannot be overstated. An innovator and pioneer who matched literature and poetry with angry, aggressive music in much the same way as his contemporary Patti Smith, Hell is often overshadowed by the bands that he helped create (Television) or influenced (the Sex Pistols, the Clash). While other punks have been incarcerated in the Rock & Roll Hall of Fame, Time shows that Hell’s place is in the street, his music and defiant spirit ready to inspire a generation of rockers to come. (Matador Records, released March 19, 2002)