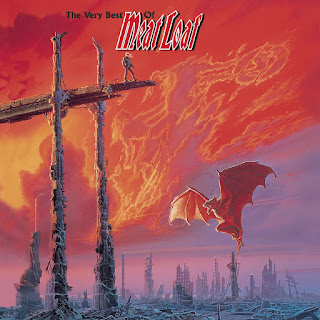 Okay, I’ll admit it – I’m a Meatloaf fan. Have been, ever since Bat Out of Hell pissed off my fellow critics so badly those two decades ago. Sure, Meatloaf’s best work, i.e. the Steinman-penned songs, is overblown, bombastic, and exaggerated. Then again, so is most rap music, but you don’t see the big-league rock crits waxing negative over N.W.A. or 2-Pac, do you?

When the ‘Loaf reunited with Steinman on Bat Out of Hell II a few years back, there had to be more than a few heart attacks at the Rolling Stone writer’s retirement home. Especially considering that the carbon-copy sequel CD hit it big, scored multi-plat and provided the erstwhile Mr. Aday with another 15 minutes of fame.

Meatloaf’s The Very Best of Meatloaf


“So,” ask fellow Meatloaf fans, “what’s the skinny on this new two-disc The Very Best of Meatloaf set?” Well, your humble Reverend always provides his readers with the straight 4-1-1 with every review. On this subject, I can honestly say that if you’re a true-blue, died-in-the-wool Meatloaf fan, then use the coin you’d spend on this turkey to dig up a copy of the 2-CD live set on Tommy Boy instead. Why? Because there’s nothing really new here to attract the marks, much less satisfy the hard-core faithful.

The Very Best of Meatloaf offers eighteen tunes, broken down as follows: there’s five cuts (out of seven) from the original Bat Out Of Hell, including the title track, the hit “Two Out of Three Ain’t Bad” and the still-hilarious “Paradise By the Dashboard Light.” There are four cuts from the Bat sequel, including “Life Is A Lemon And I Want My Money Back,” although the producers here have ignored the “Bat Out of Hell” remake from that MCA album. You’ve got a couple songs from the Dead Ringer LP, including the title track – a spirited duet with Cher – and you’ve got the obligatory “Midnight At the Lost And Found,” the title track from Meatloaf’s best non-Steinman work.

Continuing, there are a couple of songs from the misguided Welcome To the Neighborhood (we’re up to 14 now) and the rocking “Modern Girl” from Bad Attitude. There’s nothing from the limpid Blind Before I Stop, and they’ve ignored hot songs like “Razor’s Edge” from Midnight or “Wasted Youth” from Bat II. That leaves three songs that don’t come from a Meatloaf album, proper – two Andrew Lloyd Weber compositions with Steinman lyrics and “Is Nothing Scared,” easily the worst song Steinman has written in eons. All three tracks are real snoozefests, certainly not representing the “very best” of Meatloaf.


The upshot here, true believers? If you have Bat Out of Hell and its sequel, then you already have half the songs available on this set (and a few more). There are no real rarities here, no creative programming – why nothing from any of Meatloaf’s hard-to-find import discs, or perhaps his inspired “Sweet Patootie” from the Rocky Horror soundtrack? If you just discovered Meatloaf with Bat II a couple of years back, then buy the original debut. If you have that and still want to know more about the ‘Loaf, then dig up copies of Midnight At the Lost And Found, Bad Attitude, and Dead Ringer, if only for the Cher duet. You can score all three for about twice the price of The Very Best of Meatloaf and end up with three times as much music, tunes that really represent the “very best” of this larger than life vocalist. (Epic Records/Cleveland International, released November 24th, 1998)

Buy the CD (or don’t) from Amazon.com: Meat Loaf’s The Very Best of Meatloaf