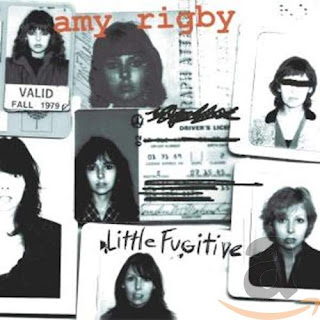 Thanks to Little Steven’s addition of “Dancing with Joey Ramone” to the playlist of his weekly Underground Garage syndicated radio program, Amy Rigby has probably received more airplay for her fifth album than she has for her first four combined. Van Zandt has always had a good ear for ‘the song,’ and his inclusion of Rigby’s catchy pop-rocker is as much for the song’s killer hook and clever wordplay as for its subject matter.


Weaving song titles like “Be My Baby,” “Gloria” and “Needles & Pins” into her fantasy of dancing with the rock ‘n’ roll hall of famer, Rigby delivers her vocals with vintage girl-group glee, the song’s infectious melody standing up to repeated listens. I know, ‘cause I’ve spun the song several dozen times and haven’t gotten tired of the damn thing yet. In “Dancing with Joey Ramone,” Amy Rigby has written the perfect tribute to rabid record collector Ramone and I have no doubt that somewhere in rock ‘n’ roll heaven, my pal Joey is dancing along with Amy.

One would think that a song as inherently cool as “Dancing With Joey Ramone” would dominate an album, overshadowing the other material, but that just ain’t so here. Little Fugitive is a solid effort from a veteran performer, brimming over with great songs. Rigby writes songs like a Renaissance master, her musical palette swimming with shades of pop, rock, folk and even a touch of psychedelia. Rigby’s highly-personalized lyrics offer a mirror to her soul, and it seems that sometimes she even surprises herself with the resulting reflection. In the defiant “Rasputin,” Rigby takes stock of her life and compares her resilience to that of the infamous Russian mystic.

On “The Trouble with Jeanie,” she obviously wants to dismiss her husband’s ex-wife except for the fact that the woman is “so nice” that it’s hard to dislike her. “So You Know Now” is a direct throwback to ‘60s psych-pop, Rigby’s sultry vocals simply hypnotic above the swirling, chaotic instrumentation. “Needy Men” sounds like a movie moment, one of those Brill Building tunes with a bright sunny melody and deceptively cynical lyrics. Lenny Kaye’s excellent “The Things You Leave Behind” is provided a magical reading, Rigby’s charming vocals matched with a middle-aged weariness that jaded young artists, for all their alleged “worldliness,” have yet to discover.


Woven throughout Little Fugitive are the little insights that often escape lesser wordsmiths. Rigby’s talent is in taking the mundane realities of daily life and recognizing the humor, the sadness, the irony and the joy in each little moment. Paired with an unerring artistic sense that makes the best use of 50+ years of popular music as a foundation, Rigby delivers songs that are emotional, invigorating and intelligent in a way that is far too often missing from the radio these days.

In a perfect world, “Dancing With Joey Ramone” would be blaring from the airwaves of every pop-oriented radio station in America. As it is we’ll merely have to thank Steve Van Zandt for his recognition of excellence and be satisfied that, in this day and age, a talent the caliber of Amy Rigby can still find an appreciative and supportive ear now and then. (Signature Sounds, released August 23, 2005)