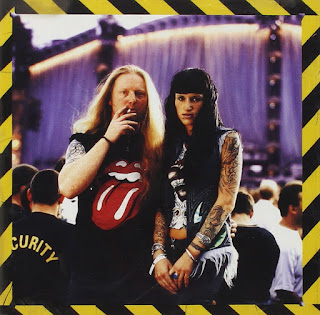 Throughout their lengthy and illustrious career, the Rolling Stones have always been known primarily as a live band. Strangely enough, however, they’ve never really released a great live album. From historic shows like Leeds, Oakland ‘69 or New Orleans ‘78, their best onstage moments have always been caught on tape (and subsequently put on vinyl and/or CD) by bootleggers. Even Get Yer Ya-Ya’s Out, arguably the band’s best live effort, has been eclipsed now that the entire show, taken from the original acetates, has recently been bootlegged by Japan’s Stones-crazy Vinyl Gang. Unfortunately, the release of No Security, the Stones’ umpteenth live disc, will do nothing to add to the Stones’ live legacy.

The Rolling Stones’ No Security

Not that No Security is entirely bad, mind you. It doesn’t reinvent the band as the semi-live, semi-acoustic Stripped did, but it’s probably the band’s best live effort since Ya-Ya’s, which isn’t really saying much. Some of the performances here are golden – Mick’s duet with Dave Matthews on “Memory Motel,” the great Taj Mahal guesting on a cover of his “Corinna,” and Joshua Redman’s sax flourishes complimenting Mick’s vocals on “Waiting On A Friend” come to mind. “Thief In the Night enjoys a particularly soulful rendition.

Other cuts on No Security are luckluster enough to be sleep-inducing, however – Jagger cakewalks through a morose rendering of “Gimme Shelter,” a song that once held so much primal power and raw energy that people lived (and died) by it. The band just sounds tired on cuts like “Sister Morphine” and “The Last Time,” and the couple of songs included here from Bridges To Babylon are so unremarkable as to be practically anonymous. Part of the problem is that No Security was compiled from songs from five different shows, thereby losing whatever cohesion and continuity the performances had in the first place. Another part of the problem is that the Stones have always been a visual band, one best enjoyed while sitting right in front of them…an intangible that doesn’t translate well to CD.

Mick, Keith, tell you what, boys – next time out (and there will be a next time, you can bet on it!) just record a bunch of shows, pick the best one and release it in its entirety, flaws and all. Either that or dip into the vaults and release a legitimate version of one of those often bootlegged shows. Until then, we’ll make do with No Security, the latest not-so-great live album from the world’s greatest live band, the Rolling Stones. (Virgin Records, released November 2nd, 1998)

Buy the CD from Amazon: The Rolling Stones’ No Security