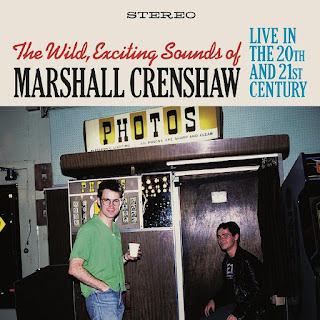 Marshall Crenshaw – The Wild, Exciting Sounds of Marshall Crenshaw (Sunset Blvd Records)
American major labels are scouring the archives for uncut gems to pump up their expensive “deluxe” anniversary reissues of best-selling back catalog titles. These sets are often luxury purchases for well-heeled boomers and they offer little in the way of value with their seemingly endless studio outtakes and they-shoulda-remained-demo-recordings. The legendary Marshall Crenshaw, on the other hand, delivers on the dollar, his archival release The Wild Exciting Sounds of Marshall Crenshaw a reasonably-priced two-disc set comprised of previously-unreleased live performances. What do you get for your double-sawbuck? Disc one offers 16 tracks with Crenshaw’s early band circa 1982-83 featuring delightful performances of some of his best-known songs like “Whenever You’re On My Mind,” “Rockin’ Around In NYC,” “Cynical Girl,” and “Someday Someway,” all of ‘em performed with energy and youthful enthusiasm. Disc two stirs in a couple of lovely solo acoustic numbers and a 1991 performance of “Walkin’ Around” with friends like Mitch Easter and Brad Jones. Crenshaw lovingly covers the Bottle Rockets’ sublime “Kit Kat Klock” before the disc closes with six songs performed with the Bottle Rockets themselves and recorded by Eric Ambel (The Del-Lords), the engaging performances sitting comfortably at the intersection of Beatlesque power-pop and Americana. Grade: A   BUY! 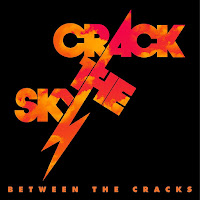 Crack The Sky – Between the Cracks (Carry On Records)
Rust Belt rockers Crack The Sky have been dancing on the hard edge of progressive sounds for better than 45 years now and, with roughly two-dozen studio and live albums to their name (including this year’s wonderful Tribes), CTS has a rather sizeable back catalog of music. Between the Cracks is an odds ‘n’ sods collection of songs chosen by the band members, material they collectively consider to be “sleeper tracks that fell between the cracks.” It’s a heady collection, to be sure, with deep cuts dating back to the early ‘80s, but the bulk of the dozen songs here are from the new millennium (my guess is that they couldn’t license any of the 1970s-era Lifesong label tracks). What you hear is a mature, veteran band with significant musical chemistry as shown by songs like the mesmerizing “Zoom,” the ghostly Goth-prog of “We’re All Dead,” the Kraut-rockin’ “The Box,” and the stunning guitars and biting social-commentary of “Immigration.” Crack The Sky’s sound is equal parts guitar-rock and proggy ambition, performed with imagination and no little skill. Early CTS fans should check out Between the Cracks for a taste of what this talented band has been doing in recent years. Grade: B+   BUY! 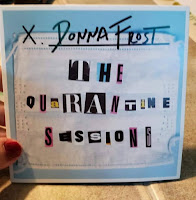 Donna Frost – The Quarantine Sessions (self-produced)
Like many of us, Nashville-based singer, songwriter, and guitarist Donna Frost spent much of 2020 locked in the house, trying to avoid the plague raging outside our doors. She did what a lot of restless musicians did – she wrote and recorded a bunch of songs, five of which are featured on Frost’s The Quarantine Sessions EP. With a gorgeous voice that straddles the line between folk and country, Frost looks for the positive with songs like “I’m Keeping the Faith” and “Love and Kindness,” her performances anchored by a gentle guitar strum and unadorned, emotionally-impactful vocals. With “Quarantine Blues” Frost displays a deft hand with Piedmont-styled blues guitar, her spry inspired-by-real-life lyrics cleverly documenting America circa 2020 while “When This Is All Over” is an uplifting look towards the future. The Quarantine Sessions closes out with “Welcome To Our New World,” a frank appraisal of our predicament that is musically jauntier than the lyrics. Overall, Frost faces the pandemic and quarantine with hope and humor with these five carefully-crafted and entertaining songs. Grade: A-   BUY DIRECT! 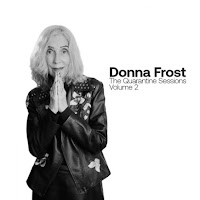 Donna Frost – The Quarantine Sessions, Volume 2 (self-produced)
Sadly, the pandemic didn’t go away as quickly as a certain self-absorbed segment of our political leadership believed, and singer-songwriter Donna Frost experienced the loss of her mother to Covid. As such, the nine songs on Frost’s The Quarantine Sessions, Volume 2 are a shining example of faith in the presence of grief and tragedy. Frost’s wonderful vocals are accompanied only by her guitar, both instruments displaying a greater sense of urgency than previously with many of these songs. The positive lyrics of “Here and Now” and “I’m Gonna Take This Day” are nevertheless plagued by the same doubt and uncertainty that many of us are still experiencing, while the bluesy shades of “Bitter But Better” are entirely appropriate considering the song’s see-sawing emotions. Frost’s beautiful and touching “Mama’s Prayers” is a wonderful reminiscence of a loving, supportive relationship that deserves a place on country radio and, by closer “Press On,” the singer has regained her determination to face down adversity. The songs on The Quarantine Sessions, Volume 2 are more complex and pissed-off performed more aggressively than its predecessor, but Frost’s lyrics still display the hopefulness and optimism we’ll need to get through this three-ring circus we call life. Grade: A   BUY DIRECT! 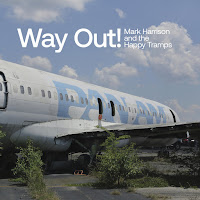 Mark Harrison and the Happy Tramps – Way Out! (Twister Records)
With Nashville rockers Sour Ops, Mark Harrison and brother Price weld Detroit sonic overkill with modern power-pop to create a fresh throwback sound. Way Out!, the debut from Mark and his band the Happy Tramps, veers away from the guitar-happy crash ‘n’ bang of Sour Ops in favor of a chill retro sound that’s heavy on 1960s-styled pop-rock-soul atmospherics. Opener “Believe It Or Not” melds Booker T-inspired pop-soul and a lush backing soundtrack to Harrison’s trembling, emotional vocals. It’s a heady musical moment, one of many on Way Out! Harrison’s vocals remind of Roy Orbison by way of Chris Isaacs, songs like “Where The Wild” and “Want You” displaying haunting beauty while tunes like “Mindbender” and “Shake It” roll down the tracks with a drunken bluesy swagger (“Shake It” displaying some of Harrison’s fiery git-licks). “Down The Line” and “Leaving Now” evince a sort of folkie singer-songwriter vibe with an emotional heartbeat and those ethereal vocals. Harrison is a pretty good lyricist in a Dylanesque manner, and it’s to his and the band’s credit that they stamp their trademark on the disparate styles described above and, much like Sour Ops, make it a sound uniquely their own. Highly recommended! Grade: A+   BUY DIRECT! 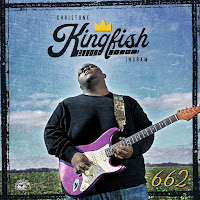 Christone “Kingfish” Ingram – 662 (Alligator Records)
Christone “Kingfish” Ingram turned more than a few heads with his stunning 2019 debut, Kingfish. By the time of that album’s release, the talented 20-year-old guitarist had already performed at the Obama White House and opened for legends like Buddy Guy and the Tedeschi Trucks Band. The ambition and beauty of Kingfish does nothing to prepare you for Ingram’s spectacular sophomore effort, 662 (named for his Clarksdale, Mississippi area code). Working with producer Tom Hambridge, Ingram has delivered a mature, multi-faceted work that shines like a jewel in the sunlight. The guitarist masterfully blends contemporary blues styles with blues-rock and throwback R&B for a sound that will have your stereo speakers jumping. The title track is a juke-joint rave-up with flamethrower guitar while the socially-conscious ‘70s-styled funk-soul sound of “Another Life Goes By” displays Ingram’s smoky, Curtis Mayfield-styled vocals. The “bonus” track “Rock & Roll” is just hauntingly beautiful, with languid vocals and elegant fretwork that sticks in your brain for days. Ingram has upped his game throughout 662, his vocal phrasing meeting the needs of each song and supported by his fluid, diverse, and electrifying guitar style. Alligator Records’ founder Bruce Iglauer discovered a rare talent in Christone Ingram. Grade: A+   BUY! 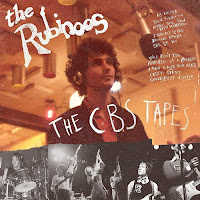 The Rubinoos – The CBS Tapes (Omnivore Recordings)
Power-pop pioneers the Rubinoos shock and awe with The CBS Tapes, a collection of demo recordings evincing an anarchic attitude and adorable pop-punk energy almost two decades before Green Day and the Offspring made their mark. Recorded at CBS Studios in San Francisco in 1976, prior to the band’s signing with Berserkley Records (home to Earth Quake, Greg Kihn, and Jonathan Richman), this eleven-track collection features the band’s original roster, including guitarists Jon Rubin and Tommy Dunbar, galloping through a 30-minute set that approximates their live show at the time. So, you get ripping original tunes like the bouncy, glam-rock “All Excited” and the young, loud, and snotty “I Want Her So Bad” delivered with the subtlety of a stick of dynamite alongside cover songs both serious (The Beatles’ “I Want To Hold Your Hand”) and not (The Archies’ “Sugar Sugar”). The band displays an unexpected instrumental deftness on their cover of the Meters’ classic “Cissy Strut” while their take on friend and labelmate Jonathan Richman’s “Government Center” is provided a sophisticated pop-rock arrangement. The CBS Tapes preserves the sound of happy music guys making a joyful noise. Reforming in 2010, the current touring band includes three original members. Bravo! Grade: B+   BUY! 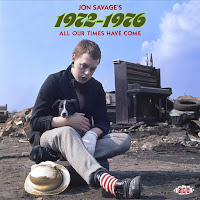 Various Artists – Jon Savage’s 1972-1976: All Our Times Have Come (Ace Records U.K.)
After releasing a handful of personally-curated compilation albums covering the essential years of the 1960s (one each from 1965 to 1968), British rock critic Jon Savage jumped to a multi-year period for 2019’s Rock Dreams On 45 (1969-1971) comp. This year’s model stretches a little further, All Our Times Have Come spanning 1972-1976 across two discs and 44 songs. This sort of collection can be scattershot, but Savage has excellent musical taste and an ear for primo-grade rock ‘n’ roll. Thus, you get the expected hit singles from folks like Alice Cooper, Roxy Music, John Lennon, Andy Pratt, Blue Öyster Cult, and Blondie as well as classic deep cuts from beloved rockers like the Byrds, Mott the Hoople, Free, Lou Reed, the Sweet, Patti Smith, and Big Star. Throw in cult rockers the Move (“Do Ya”), Flamin’ Groovies (“Slow Death”), Eno (“Third Uncle”), the Ramones (“Blitzkreig Bop”), and Grin (“End Unkind”) alongside lesser-known artists like Faust, Sparks, the Hammersmith Gorillas, the Count Bishops, and the Wackers and Savage has once again assembled an entertaining and electrifying period playlist. The diverse musical selection and a profusely-illustrated 28-page booklet with extensive liner notes raise the set miles above your average “hits” collection. Grade: A   BUY!