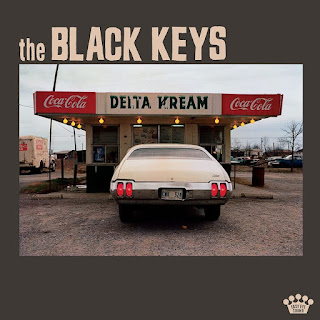 The Black Keys – Delta Kream (Nonesuch Records, CD)
The Black Keys’ much-vaunted “return to the blues” is really a musical sojourn through the Mississippi Hill Country with a collection that would feel right at home on Fat Possum Records, their former label. One of the punk-blues innovators of the early ‘00s, the Black Keys pairing of singer/guitarist Dan Auerbach and drummer Patrick Carney dabbled in soul, pop, and mainstream rock with a modicum of success over the past decade. With Delta Kream, however, they enlist the six-string talents of Hill Country stalwart Kenny Brown and jump headfirst into the songbooks of Mississippi blues legends R.L. Burnside and Junior Kimbrough. Their hypnotizing reading of John Lee Hooker’s classic “Crawling Kingsnake” is patterned after Kimbrough’s recording rather than Hooker’s 1949 hit, and much of Delta Kream delivers a similarly-mesmerizing mind-trip with reverent but unique takes on songs like Burnside’s eerie “Going Down South” or Kimbrough’s powerful “Sad Days, Lonely Nights.” Auerbach’s vocals have never sounded better, and his guitar interplay with Brown is electrifying. Carney’s percussion is spot-on as well, providing nuanced timekeeping throughout and explosive locomotion when needed. Delta Kream isn’t the sound of rock stars “slumming” but that of bluesmen reviving their mojo. Grade: A   BUY! 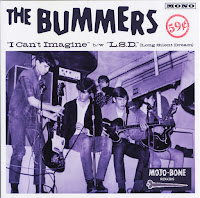 The Bummers – “I Can’t Imagine” b/w “L.S.D. (Long Silent Dream)” (Mojo-Bone Rekkids, 7” vinyl)
If not for the good folks at Mojo-Bone Rekkids, Royal Oak, Michigan rockers the Bummers may have been lost to the ignoble grave of rock ‘n’ roll obscurity – as the label’s Birdman writes in the liner notes to this groovy 7” single, “a few grungy acetates recorded for $35…and one grainy photograph were all that remained of their visionary genius.” Boy howdy! The single’s A-side, “I Can’t Imagine,” is a dreamy, mesmerizing slab o’ late ‘60s psychedelic rock with cool vox, shimmering keyboards, and the occasional stab of guitar, the song a tale of love and betrayal, the musicianship years ahead of its time. B-side “L.S.D. (Long Silent Dream)” is a similar ballad, but with shoe-gazing harmonies, an engaging melody, and a lush instrumental backdrop against which singer/songwriter Ray Bane spits out his lyrics. Although re-mastered by the notable Alec Palao, the sound is fair-to-middlin’ (Palao can’t work magic every time), but the band’s youthful energy and enthusiasm simply jump out of the grooves and demand your attention. Mojo-Bone 45s ain’t cheap ($14 plus shipping for this pancake), but if you’re a collector of 1960s-era psych and garage-rock, you’re gonna want to get in touch with the Birdman by email: mbrekkids (at) gmail.com Grade: B+ 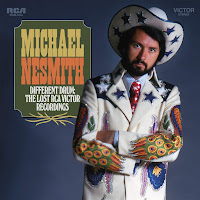 Michael Nesmith – Different Drum: The Lost RCA Victor Recordings (Real Gone Music, CD)
Michael Nesmith’s post-Monkees solo career has undergone reconsideration of late, various pundits nodding their heads in unison, agreeing on Nez’s status as a “serious musician.” Some of us grokked this 50 years ago, with the release of 1970’s brilliant Magnetic South, which was soon followed by two more trailblazing country-rock LPs displaying the engaging singer’s talent and charisma. Different Drum follows recent reissues of Nesmith’s trio of albums with the talented First National Band and is cut from similar cloth, i.e. finely-crafted country-rock performed with plenty of twang and soulfulness. The first 14 cuts here are alternative takes and studio outtakes that do a fine job in displaying the band’s immense talents and the dirty work of fine-tuning a song, and the contrasts are often stunning – Nesmith’s take on the title track is as different from Linda Ronstadt’s hit version as night is from day, and “Bye, Bye, Bye” is a rollicking cowpunk anthem. “Six Days On the Road” belches smoke and fire while rolling down the asphalt while an alternative “Some of Shelley’s Blues” is as wistful and charming as the original. Different Drum tacks on seven instrumental tracks that, while entertaining, lack the magic of the vocal performances. Grade: B+   BUY! 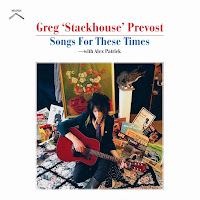 Greg“Stackhouse” Prevost – Songs For These Times (Mean Disposition Records, Spain, CD)
With Songs For These Times, the third solo album from bluesman Greg “Stackhouse” Prevost, the singer, songwriter, and guitarist has crafted an impressive collection of material that not only defies previously-held expectations but also explores the possibilities of roots ‘n’ blues music. Working with guitarist Andrew Patrick of the Rochester NY band Dangerbyrd, Prevost makes old rock ‘n’ blues tunes sound contemporary while his handful of original songs sound positively antiquated. The guitarist’s “Free As the Wind” is a powerful acoustic-blues number with subtle, mournful harmonica while the folk-blues dirge “Distant Thunder Calls” reminds of Son House crossed with Johnny Winter (and features some mighty fine guitar pickin’). “Acid Rain Falling” is probably my favorite here, the folkish blues-rock tune offering elegant guitarplay and an overall intoxicating, exotic vibe. Covers of songs by bluesmen like Rev. Gary Davis and Big Bill Broonzy are appropriately reverent, but it’s when Prevost colors outside of the lines – like his haunting reading of Hoyt Axton’s “Snowblind Friend” or Piedmont-styled take on Donovan’s “Colours” – that Prevost’s talents and unique vision of the blues really shine. If you love the blues, you owe it to yourself to discover Greg “Stackhouse” Prevost and Songs For These Times! Grade: A    BUY! 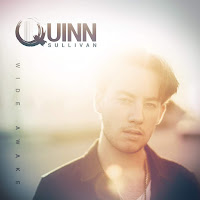 Quinn Sullivan – Wide Awake (Provogue Records, CD)
Blues guitar prodigy Quinn Sullivan is taking the Bonamassa road to riches – work with a legendary mentor (for Sullivan, it was Buddy Guy); make your bones by playing high-profile gigs (Quinn was the youngest musician to play the Montreux Jazz Festival); and work to find your voice over a number of records. Wide Awake is the 22-year-old’s fourth LP, and while he’s a skilled musician and better-than-your-average-Joe songwriter, he’s clearly still forging a unique sound to hang his hat on (to be fair, it took Joey Bones until Sloe Gin, his fifth LP). When letting his instrument do the talking, Sullivan is a stunning six-string talent who plays with great imagination and energy; he’s also miles ahead of where Bonamassa was at this age as a singer, Sullivan imbuing his material with great soul and emotion. The songwriting – mostly co-written by Sullivan with producer Oliver Leiber – is the weakest link here, largely treacly R&B-infused pop with the slightest of bluesy undertones. The album’s production is so maddeningly slick and glossy that I’ll never question Kevin Shirley’s choices again. There’s nothing on Wide Awake that’s horrible, it’s just that with a talent of Sullivan’s caliber, it could have been SO much better… Grade: B-   BUY! 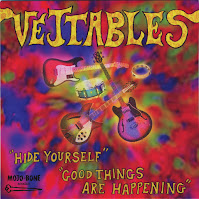 The Vejtables – “Hide Yourself” b/w “Good Things Are Happening” (Mojo-Bone Rekkids, 7” vinyl)
Another small record with a big hole from the good folks at Mojo-Bone, the Vejtables are, perhaps, one of the label’s better-known bands, and although the cover art here is mind-numbingly bad, the four-panel insert with Birdman’s liners, rare photos, and cool cartoon drawing of the band make up for it. Musically, the Bay Area rockers were on the cutting edge of psychedelic rock, these two 1966 tracks show a band whose talents could hang with big boys like Blue Cheer, the Other Half, or Jefferson Airplane. “Hide Yourself,” the single’s erstwhile A-side, is the next best thing to dosing yourself and bouncing off the walls for a few hours, the song’s ringing instrumentation, Bob Bailey’s half-buried vox, and Frank Smith’s scalpel-sharp leads defining “psychedelic” while Richard Fortunato’s 12-string brings an exotic feel to the recording. “Good Things Are Happening” is a similar banger, a bluesy, harmonica-drenched rave-up around the corner from “Tobacco Road” with snotty vocals, sleazy fretwork, and a locomotive rhythm that would have been right at home on a Nuggets or Pebbles compilation LP. Equally adjacent to both psych-rock or garage-rock, the Vejtables were on the cusp of something big. Extra credit for the cool mono sound! Email the Birdman for info: mbrekkids (at) gmail.com Grade: A