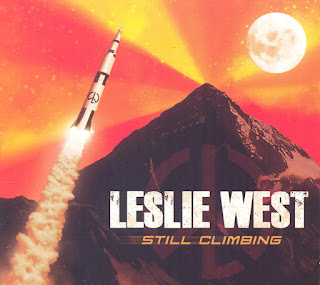 Given that guitarist Leslie West’s 2011 Unusual Suspects album featured such all-star fretburners as Joe Bonamassa and ZZ Top’s Billy Gibbons, among others, many of us held out hope that long-suffering rock ‘n’ roll fanatics would latch onto the album as the out-of-control wildfire that it was and provide West with a bit of commercial juice. Sadly, a life-threatening illness and emergency surgery prevented the guitarist from touring in support of the album and it subsequently disappeared off the radar.

Undeterred by misfortune, the big man with a larger than life personality has come roaring back with Still Climbing, the album’s title both a sly reference to the 1970 debut from West’s legendary blues-rock power trio Mountain as well as a statement of defiance in the face of his own mortality. West’s 15th solo album, Still Climbing offers up eleven brand spankin’ new performances, a mix of original tunes and inspired covers that explore themes of life, survival, and triumph over adversity.

Not as heavy on the guest stars as Unusual Suspects, West shoots for quality over with talents like Jonny Lang and Johnny Winter dropping by the studio. In many ways, Still Climbing is heavier than anything that West has done since Mountain, both in his monster fretwork but also in the album’s crashing rhythms and smothering, tuff-as-nails production. Winter brings his delightfully greasy slide-guitar licks to West’s original “Busted, Disgusted or Dead,” a wry, autobiographical tale with a razor-totin’ blues edge and gruff, Howlin’ Wolf styled vocals.

A reverent cover of Percy Sledge’s R&B classic “When A Man Loves A Woman” is a wonderful duet between West and Lang while Dee Snider of Twisted Sister provides surprisingly effective vox on a hard-rockin’ cover of Traffic’s “Feeling Good,” West’s meaty guitar licks flying high in the mix. Originals like “Tales of Woe” display a different facet of West’s talents, his emotional vocals and elegant fretwork bulldozing the song to rarified heights. An engaging and entertaining hybrid of guitar-driven hard rock and blues, Leslie West’s Still Climbing proves that you can’t keep a good man down! Grade: B+ (Provogue Records, released October 29, 2013)