Classic Rock Review: Cat Mother and the All Night Newsboys' The Street Giveth...and the Street Taketh Away (1969) 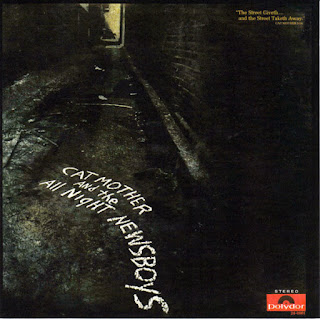 Cat Mother and the All Night Newsboys were a bunch of roots-rockers from New York City, playing what I’d call “hippie music,” i.e. an inspired blend of rock, country, blues, and folk music not dissimilar to what fellow travelers like Moby Grape, Poco, and even Buffalo Springfield were doing at the time. Formed in 1967 by bassist Roy Michaels and keyboardist Bob Smith, Michaels had been a member of the Au Go Go Singers with Stephen Stills and Richie Furay before they formed Buffalo Springfield. The pair added guitarists Charlie Chin and Larry Packer and drummer Michael Equine and set out to conquer the world of rock ‘n’ roll.

Cat Mother and the All Night Newsboys quickly garnered a fan following through regular appearances at Café Wha? which, in turn, led to them becoming the house band at the infamous Electric Circus club in the East Village. A series of free concerts at Tompkins Square Park established Cat Mother as part of a thriving Greenwich Village music scene that included bands like the Lovin’ Spoonful, Blues Project, and the Youngbloods. They came to the attention of manager Michael Jeffrey, who was Jimi Hendrix’s mercurial overseer, and he got them a deal with the newly-formed Polydor Records label, opening slots for Hendrix, and a high-profile gig at the 1969 Toronto Rock and Roll Revival, playing alongside folks like Chuck Berry and the Doors.

Cat Mother and the All Night Newsboys’ The Street Giveth...

The association with Jeffrey and Hendrix led to the guitarist co-producing Cat Mother’s debut album, The Street Giveth…and the Street Taketh Away. How much of the album’s impact is due to Jimi and how much to the band is lost to time but, considering the loose-knit, ramshackle countryish rock sound that Cat Mother achieved, I’d have to say that the production leans in their direction. The Street Giveth… opens with the too-clever-by-half “Good Old Rock ‘n’ Roll,” a medley of sorts that included heaps of honky-tonk piano, spirited vocals, and stinging guitar. A tribute to the music of the band’s youth, it incorporates scraps of “Sweet Little Sixteen” (Chuck Berry), “Long Tall Sally” (Little Richard), “Whole Lotta Shakin’ Goin’ On” (Jerry Lee Lewis), “Blue Suede Shoes” (Carl Perkins), and “Party Doll” (Buddy Knox), all strung together with original lyrics and musical passages.

“Good Old Rock ‘n’ Roll” was a surprise hit, rising to #21 on the pop chart and dragging the album along for the ride to #55 on the charts. It didn’t hurt that much of the rest of The Street Giveth…, while not in a similar vein, was nevertheless a strong collection of songs, musically and lyrically. “Favors” is built on a bluesy underlying riff straight out of the Doors’ playbook, but incorporates hard-rocking instrumentation, scorching fretwork, and gorgeous harmony vocals amidst the din. The folkish “Charlie’s Waltz” is a delightful story-song with sonorous vocals and a lush soundtrack that offers swirling crescendos of instrumentation while “How I Spent My Summer” is more in the style of Country Joe & the Fish, a country-tinted rocker with complex instrumentation, mesmerizing keyboards, and strong harmony vocals.

With a band as eclectic as Cat Mother, no single song can be considered a “departure” from their sound, but “Probably Won’t” comes close to qualifying, the song’s strident lyrics and piano-drums-bass rhythmic track setting it apart from much of the album’s good-time sounds. The following “Can You Dance To It?” evinces a funky, strutting rhythm with Southern-fried git-pickin’ that could pass for Steve Cropper or Elvin Bishop. By contrast, “Bad News” captures a big-band sound not unlike Blood, Sweat & Tear’s first album, a bluesy undercurrent and jazzy flourished balanced by rustic rock ‘n’ roll similar to the Band. The album-closing, nine-minute instrumental jam “Track In A” would become a longtime fan favorite, the song a jazzy romp with plenty of cowbell, multi-layered keyboards, exotic rhythms, and elegant fretwork that rolls along to a satisfying finish. 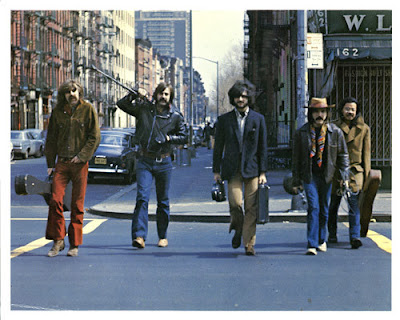 In a year that boasted of debut albums from heavyweight talents like Led Zeppelin, Neil Young, the Flying Burrito Brothers, the MC5, Free, the James Gang, Joe Cocker, Poco, Alice Cooper, Blind Faith, Yes, Humble Pie, the Stooges, Santana, and King Crimson (among others…yeah, 1969 was a GREAT year for rock music!), Cat Mother and the All Night Newsboys still had a lot to brag about. The Street Giveth…and the Street Taketh Away delivered on the band’s promise, masterfully combining disparate music styles into a cohesive sound that was as complex as any albums by their contemporaries. Fifty-plus years on from its release, The Street Giveth… still sounds vital, energetic, creative, and entertaining, a relic from an earlier era where musicians could (sometimes) get their groove on without market interference.

To get out from under Jeffrey’s management and away from an increasingly stressful life in NYC, Cat Mother moved out to the west coast – first to San Francisco and later to a communal household in Mendocino – and dropped the “All Night Newsboys” from the band’s name. They would record three more albums for Polydor – 1970’s Albion Doo-Wah, 1972’s Cat Mother, and 1973’s Last Chance Dance – pursuing a more country-rock sound. Most of the band members continued to play music after Cat Mother’s mid-‘70s break-up, with Michaels landing in Austin, Texas by way of Thailand; Smith remaining in Mendocino and playing with various local outfits; and Packer joining Sha Na Na and playing with folks like Lou Reed and Hall and Oates. For a few years in the early ‘70s, however, Cat Mother was one of the most innovative and entertaining bands to cram country and rock music into a single loose-fitting straitjacket. (Polydor Records, 1969)