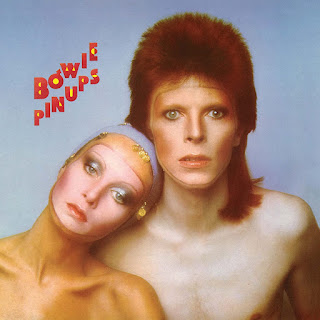 In 1973, British teens were deeply in the grip of “glam-rock,” with David Bowie and Marc Bolan of T.Rex sitting atop of a cultural phenomenon that included hitmakers like Slade, Sweet, Cockney Rebel, Mott the Hoople, and Roxy Music as well as a legion of lesser-known bands. Glam even paddled its way onto U.S. shores in the forms of Lou Reed, Suzi Quatro, and the New York Dolls. Bowie himself was riding high with three U.K. Top Ten albums (Hunky Dory, Ziggy Stardust, and Aladdin Sane), the latter two of which also struck gold stateside.

While Bowie was working on a vaguely-defined concept album based on George Orwell’s post-war dystopian novel Nineteen Eighty-Four (elements of which he’d weave into 1974’s Diamond Dogs), Bowie enlisted guitarist Mick Ronson and bassist Trevor Bolder from his former backing band the Spiders From Mars, along with Bluesbreakers drummer Aynsley Dunbar, to record a label-pacifying “stopgap” collection of cover tunes. With a track list comprised of mid-to-late ‘60s British records that Bowie loved as a younger man, Pinups was designed with an eye towards wooing teenaged American fans unfamiliar with the original versions of the songs.

Critics unfairly assailed Pinups, many writing that Bowie’s renditions of songs by the Pretty Things, Them, the Yardbirds, the Who, and others weren’t as good as the originals. Blah, blah, blah…these reviews missed the point, really, as Bowie performed these personal faves not with mindless mimicry of the originals but rather in his own unique fashion, reinterpreting them as he saw fit. He retained enough of the original flavor and melodic hooks to reel in listeners, but delivered them with passion and energy that created an irresistible playlist that appealed to fans like catnip. For many of us Bowie fans at the time, this was the first we heard some of these songs, prompting many to go out and look up the originals. It’s safe to say that the Pretty Things won over more than a few new fans stateside after hearing Bowie singing “Don’t Bring Me Down” or “Rosalyn.”

Like usual, Bowie was ahead of the trends, recording an album of cover songs as a lark at the peak of his 1970s-era commercial success. Truthfully, though, Pinups is a good album by any standard of rock ‘n’ roll. The aforementioned PT’s song “Rosalyn” takes the band’s basic blues-infused garage-rock blueprint, spins the tempo up to punk-rock levels of energy, and lets Ronson cut loose with his dynamic, razor-sharp riffing. The song quickly jumps into a tearful reading of Them’s “Here Comes the Night” which captures all the blue-eyed soul and heartbreak of Van Morrison’s original, while the Yardbirds’ cover of Billy Boy Arnold 1955 song “I Wish You Would” is all but shorn of its Chicago blues roots in favor of a piercing Ronson guitar riff and an uncompromising and fiercely reckless arrangement. 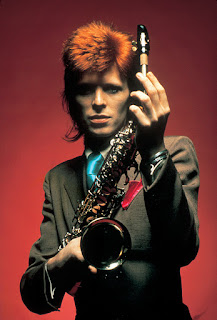 The Mojos – which counted Aynsley Dunbar among their early members – are one of the more obscure choices here, and the band’s “Everything’s Alright” builds upon the song’s British Invasion roots with a glammed-up arrangement heavy on Bowie’s vocal gymnastics and Dunbar’s tribal rhythms. The Who’s “I Can’t Explain” veers delightfully onto Roxy Music turf with a slowed-down, almost languid performance punctured by cacophonic blasts of saxophone. Bowie raids the Peter Townshend songbook again for “Anyway, Anyhow, Anywhere,” the singer playing it straight down the line with a close-to-the-sleeve vocal performance wrapped around Dunbar’s Keith Moon-styled drum pyrotechnics.

The mournful “Sorrow,” which had been a U.K. chart hit for both the McCoys in 1965 and the Merseys in ’66, was the break-out song from Pinups, and while it rose to #3 on the U.K. charts (#1 in Australia!), it found only a few diehard fans in the U.S. Bowie’s rendition is superior to either of the previous versions, offering the perfect balance of lovelorn melancholy and creative risks (in Bowie’s gorgeous multi-tracked vocals). By contrast, the Easybeats’ “Friday On My Mind” displays Bowie’s chameleonlike ability to take on different musical styles with ease, the singer delivering a spry and energetic pop-styled vocal riding atop Ronson’s scorching guitar licks. The Yardbirds’ “Shapes of Things” was another fetching tune that prompted young fans to seek out the original, Bowie balancing art and tradition with a reckless and joyful vocal performance.

In spite of the critical barbs levied on it at the time, Pinups has weathered the decades since its release. Placed in the context of Bowie’s lengthy career – which spanned six decades and better than two dozen studio albums – Pinups is seen as a bona fide artistic triumph. With Pinups, Bowie stamped “paid” on his glam-rock persona, allowing the artist to extend himself musically wherever he chose to go. What the critics don’t know, the fanboys understand, and Pinups carried on Bowie’s commercial winning streak, topping the U.K. albums chart, hitting Top 30 in the U.S. and setting the stage for the enormous success of the following year’s Diamond Dogs. (RCA Records, 1973)