Archive Review: The High Dials’ War of the Wakening Phantoms (2005) 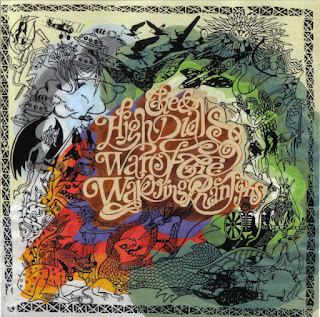 War of the Wakening Phantoms is chapter two for the High Dials, in which the Montreal band expands upon its original ‘60s-based pop-psyche sound to incorporate later and more extensive musical influences. The new jacket of many colours suits the band well, exposing more of the player’s talents while offering up matured songwriting and vocal delivery. This is not to say that the High Dials have totally jettisoned the fab ‘60s flavor that originally made critic’s darlings of the band; instead they have simply put these influences into context in creating a grander and more inclusive sound that spans four decades of rock ‘n’ roll.

The High Dials’ War of the Wakening Phantoms

Acoustic guitar and synth washes kick off “The Holy Ground,” a swirling, gentle pastiche of bright psychedelic vibes and earnest new wave rhythms. It’s an engaging song, singer Trevor Anderson’s lofty vocals adding to the attraction. “Soul In Lust” grinds in a little harder-edged direction: the riffs are bigger and the rhythms more strident, representing a seismic shift in the High Dials’ sound that continues on throughout War of the Wakening Phantoms. From this point, it’s a roller-coaster ride through a sonic funhouse of musical styles and interpretations. The High Dials never come across as derivative, instead grabbing for scraps of melody and long-forgotten riffs, weaving them together into an entirely distinctive musical identity.

The results are quite invigorating, from the ethereal atmospherics of “Winter Ghosts” to the exotic use of a sitar – reminiscent of George Harrison – on “Our Time Is Coming Soon.” The beautiful “Master of the Clouds” features delicious vocal harmonies, some effects-laden, surf-guitar influenced fretwork and a multi-layered tapestry of sound and emotion. Anderson’s vocals are warm and friendly throughout War of the Wakening Phantoms while guitarist Robbie MacArthur’s string-bending is shimmering, creative and quite infectious with great tone and stylistic experimentation. The rest of the band fills out the sound admirably, bassist Rishi Dhir and drummer Robb Surridge providing subtle, supportive rhythms while various guest musicians pitch in with horns and strings.

There are a lot of indie rock bands galloping across the pop culture horizon these days, all of them trying to capture your attention, some ink in all the right music zines and maybe an appearance on Conan or The O.C. Don’t fall for the hype. The High Dials are the real deal, an honest-to-god organic rock band working to hone their craft and make music because they like to rather than because they think they’ll get rich and famous. War of the Wakening Phantoms is a delight, an entertaining album totally devoid of pretension and filled with moments of unbridled, exuberant joy. (Rainbow Quartz International, released July 25th, 2005)