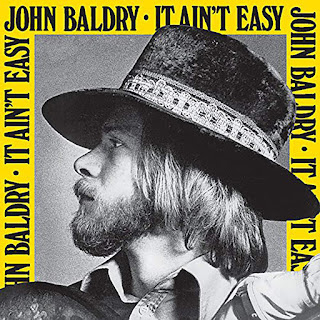 An influential veteran of the early 1960s British blues-rock scene, Long John Baldry performed with and/or inspired nearly every musician of note on the island. The popular singer and songwriter had been a large part of two essential and seminal bands of the era, Alexis Korner’s Blues Incorporated and Cyril Davies’ R&B All Stars, and had led Long John Baldry and His Hoochie Coochie Men with lead singer Rod Stewart, and Bluesology, which featured future pop star Elton John.

During the late 1960s, however, Baldry strayed from the blues and blues-rock music with which he’d made his reputation in favor of pop ballads that provided minor chart hits. By 1971, the singer’s career had stalled, and with the help of old friends Stewart and John, Baldry made a successful return to the blues with It Ain’t Easy. With one side of the original album produced by Rod Stewart and the other side produced by Elton John, It Ain’t Easy featured Baldry performing alongside some of the best and brightest musicians that England had to offer, including guitarist Ron Wood, Stewart’s bandmate in the Faces and a future Rolling Stones member; guitarist Caleb Quaye, from Elton John’s band; and Jeff Beck Group drummer Mickey Waller, among others.

It Ain’t Easy starts off with an odd little spoken-word intro titled “Conditional Discharge.” Part reminiscence, part stream-of-consciousness rant, Baldry’s low-key voice is accompanied by Ian Armit’s spirited boogie-woogie piano-pounding. The piece serves as the perfect opening for the raucous “Don’t Try To Lay No Boogie Woogie On the King Of Rock & Roll.” With Ron Wood laying down a smoking guitar riff, Baldry’s howling, growling vocals strut and swagger atop the instrumentation, Waller’s powerful drumbeats driving the song alongside blasts from Alan Skidmore’s saxophone and Sam Mitchell’s guitar, Baldry’s vocals doubled-and-tripled by a female vocal chorus. It’s a heady way to launch the album, resulting in a minor AOR radio hit that pushed the album into the Billboard Top 100.

There’s more to It Ain’t Easy than the aforementioned house-rocker, though, Baldry performing a duet, of sorts, with fellow British blues singer Maggie Bell (Stone the Crows) on Leadbelly’s classic “Black Girl.” The performance is rife with slinky, Delta-inspired stringwork, Baldry playing a 12-string guitar alongside Mitchell’s weeping Dobro steel guitar and Ray Jackson’s spry mandolin. Baldry and Bell’s vocals are dirty, drawling, and often overwhelmed by the chaotic instrumentation – a delightful mess, really, contemporizing the antique song while paying proper reverence to its origins. The album’s title track is delivered in a similar Mississippi blues vein, with a bit of gospel fever thrown in for good measure, Baldry’s soulful, shouted vocals bolstered by Bell’s harmonies, accompanied by Mitchell’s Dobro and Wood’s hot git licks.

Rock Me When He’s Gone

Baldry’s cover of the folkish “Morning, Morning,” written by Tuli Kupferberg of the Fugs, may seem an obscure and unlikely choice, but Baldry’s wistful, mourning vocals and Woods’ 12-string plucking bring a bittersweet measure to the song, which mixes folk, rock, and blues to its maximum emotional impact. Blues legend Willie Dixon’s classic “I’m Ready” is spruced up and jacked up by this British blues-rock crew, the song’s original Chicago blues strut amplified by a rowdy instrumental arrangement built around Baldry’s gruff vocals and Mitchell’s Delta-dirty slide-guitarwork. Armitt throws in some Otis Spann-inspired juke-joint piano, and as they say in Merry Ole England, “Bob’s yer uncle!”

Elton John’s “Rock me When He’s Gone” is a blues-tinged rocker with John’s typical pop overtones. Baldry does a good job with the vocals, backed by his female vocal choir, John’s lively piano and Caleb Quaye’s chiming organ. The original ten-track release of It Ain’t Easy closed out with the Rod Stewart/Ron Wood/Ronnie Lane tune “Flying,” a mid-tempo, folkish affair with slight vocals, minor guitarplay from Quaye, and John’s background piano. It was a rather weak way to end an otherwise strong album, but this reissue CD tacks on seven red-hot bonus tracks to pacify the punters. An acoustic version of the Sonny Terry and Brownie McGhee gem “Blues (Cornbread, Meat And Molasses)” is Piedmont blues by way of London, with lively guitar and harmonica, with Baldry’s perfect drawl bringing the lyrics to life. Delta great Robert Johnson’s “Love In Vein” is delivered as a guitar-heavy dirge with a juke-joint heart, while Leroy Carr’s “Midnight Hour Blues” is a joyous celebration of the Delta spirit with lonesome harp and sparse but effective guitar picking laid beneath Baldry’s wailing vocals.

While Baldry would go on to record several albums that were bluesier than It Ain’t Easy – including Remembering Leadbelly, his 2001 tribute to the legendary Huddie Ledbetter – a large part of this British blues-rock institution’s legacy is built upon this early album. Representing somewhat of a U.S. commercial breakthrough to go along with his longstanding popularity in the U.K., this is the album that introduced us to Long John Baldry and made many of us look at British blues in a different light. Best of all, It Ain’t Easy still rocks hard and sounds great even after 40+ years, and if you ain’t heard it, maybe it’s high time you did! (Stony Plain Records, reissued April 24, 2012)

Also on That Devil Music: Long John Baldry's Everything Stops For Tea review