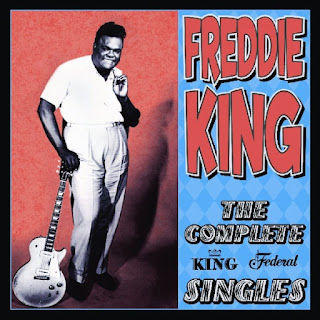 As blues historian and music journalist Bill Dahl points out in his exhaustive liner notes for the wonderful Freddie King set The Complete King Federal Singles, while the legendary guitarist is usually seen as a Texas blues firebrand, King actually spent better than a decade circa 1950 to 1963 living and playing in Chicago. Originally mentored by guitarists like Jimmy Rogers, Eddie Taylor, and Robert Jr. Lockwood, King became one of the innovators of the West Side sound along with other young six-string talents like Magic Sam and Otis Rush.

As Dahl also points out, it was the twin influences of Texas bluesmen like T-Bone Walker and Lightnin’ Hopkins and the blues he heard, and played, in Chicago that made Freddie King a unique figure on the modern blues scene. More than any of his peers, King enjoyed modest success on the pop charts, primarily through the better than two-dozen singles he released on the associated King and Federal Records labels between 1960 and 1967. Freddie’s melodic licks and unique finger-picked guitar style, as heard on these singles, would be a major influence on a generation of British blues-rockers like Eric Clapton and Jeff Beck.

Sadly, King’s back catalog is in serious disarray, with a handful of titles available from Friday Music, and many other albums simply out-of-print. Even odder, no collection has previously featured the aforementioned groundbreaking, influential singles King recorded for King and Federal until now. The Complete King Federal Singles collects all 54 of the guitarist’s original sides for the labels stretched across two CDs, providing listeners with a whopping 155 minutes of fiery guitar blues, red-hot R&B jams, and a few misfires. King’s first single for Federal – the label that James Brown made famous – was the slow-burning “You’ve Got To Love Her With A Feeling,” a remake of a classic Tampa Red side that showcases King’s underrated vocals and smoldering fretwork.

It was King’s second effort for Federal, the immortal instrumental “Hideaway,” that would forever become known as his signature song, however, King using scraps of melody and guitar “borrowed” from other artists like Hound Dog Taylor to create the energetic guitar-driven romp. Named for Mel’s Hideaway Lounge, one of the West Side venues that King frequently played at in Chicago, “Hideaway” became a Top 30 pop hit, hit #5 on the R&B charts, and would subsequently be covered by dozens of other artists, including John Mayall’s Bluesbreakers and Stevie Ray Vaughan. An energetic boogie with lively fretwork and a break that includes the rhythmic vamp from the “Peter Gunn Theme” (from a popular early 1960s TV show), “Hideaway” is a true American music classic.

“Hideaway” would set the stage for much of what would follow during King’s lengthy tenure with the King/Federal label family…bluesy vocal R&B tunes and the occasional instrumental, all showcasing King’s flexible guitar stylings. The 1961 track “Lonesome Whistle Blues” offers up some tasty guitar licks, backing vocals that borderline on doo-wop, great piano play, and a sultry rhythm that drove the song to #8 on the R&B chart. The B-side to this one was “It’s Too Bad Things Are Going So Tough,” a tear-jerker blues tune with crying fretwork and mournful piano notes, the song a remarkable (and unheralded) example of the traditional Chicago blues style.

The 1961 instrumental “San-Ho-Zay!” would become another hit for King, who borrowed much of its structure from fellow Chicago blues guitarist Eddie C. Campbell. Bluesier and with more distortion than “Hideaway,” this instrumental foreshadowed the British blues-rock explosion that was a few years away in the future. Another of King’s overlooked instrumentals, “Sen-Sha-Shun,” was the B-side to the more traditional blues of “I’m Tore Down.” While the former offers up plenty o’ hot licks and smoky vocals, King backed on the upbeat houserocker by a blast of horns, the latter tune takes an entirely different tack, mixing bits of blues and rockabilly with an undeniable surf-guitar sound for an electrifying, invigorating performance.

During the 1960s, labels released new singles with a frequency unheard of today, and they often asked artists to record holiday-themed material for the market. King’s entry into the Christmas sales fray is the wonderfully morose “Christmas Tears.” Although the 1961 single was only a modest R&B chart success, it’s a fine holiday tune with King displaying a hot hand on the fretboard, a jazzy rhythmic backdrop playing against his loudly-sobbing vocals. The single’s B-side, the raucous “I Hear Jingle Bells,” is a delightful, over-the-top rocker that provides several licks that Clapton would later steal for the Yardbirds.

Although King would chart an amazing seven singles during 1961, his streak ended there and he would be pushed throughout the ensuing years towards more commercial R&B material and songs designed to exploit teen trends during the early ‘60s. “Do the President Twist” was one such attempt to cash-in on a popular dance craze, the lightweight 1962 effort overshadowing King’s stinging guitar licks with blaring horns and unremarkable vocals by Lula Reed, wife of producer Sonny Burgess. More interesting is the scorching “What About Love,” a R&B-tinged rocker that put King’s voice loud and proud in the mix and offering up a couple of short but sweet solos. That single’s instrumental B-side, “Texas Oil,” delivers a fluid groove, plenty of hornplay and, most importantly, King’s wiry guitarplay throughout.

As the calendar pages turned, the label continued to downplay King’s strengths with hackneyed attempts at gaining a hit song, as shown by the relatively-tame 1963 instrumental “The Bossa Nova Watusi Twist,” which attempted to capitalize on three dance trends at once, with only very modest success (#103 on the pop chart). It could be worse, however – the horrible double-sided monster that was “One Hundred Years” b/w “(I’d Love To) Make Love To You” would eschew King’s guitar altogether in an attempt to remake the Texas bluesman as a pop crooner, the B-side of the 1963 single displaying a pronounced island lilt while the A-side lacks any sort of melodic hook for King to hang his vocals on, and only sparse instrumentation (sans guitar) to attract listeners.

The aforementioned creative and commercial flops notwithstanding, King did record some fine blues material during the latter part of his years with King/Federal. Alongside such marginal fare as “Surf Monkey” and “King-A-Ling” you’ll find gems like the old-school blues of “(The Welfare) Turns Its Back On You,” the socially-conscious lyrical commentary offering up cutting guitar licks, honky-tonk piano, and mournful saxplay. The 1964 track “Someday, After Awhile (You’ll Be Sorry)” is a minor blues masterpiece crying out for rediscovery by a modern singer like John Nemeth, King’s tortured vocals matched tear for tear by his emotional fretwork. The jazzy “Now I’ve Got A Woman” would have been tailor-made for a singer like Ray Charles, the up-tempo R&B locomotive fueled by King’s lively solos, while a cover of Jimmy McCracklin’s “You’ve Got Me Licked” is an inspired mix of Chicago-style and West Coast blues with a smooth groove and piercing notes dancing atop the rhythmic instrumentation.

King returned to Texas late during his years with the King Records machine, preparing for the next stage of his career. Blues music was evolving throughout the 1960s, moving away from the business model of releasing a half-dozen singles on an artist during the year and towards fully-realized, full-length albums. King would move onto Atlantic’s Cotillion label for a pair of late 1960s albums produced by saxophonist King Curtis before signing with Leon Russell’s Shelter Records label for a handful of early-to-mid-1970s album releases that would find a new audience and cement his legacy as one of the greatest blues guitarists.

King laid the foundation for his legacy with the 54 sides that he recorded for King and Federal, and while there are more than a few clunkers to be found among the tracks preserved by The Complete King Federal Singles, the gold far outweighs these forgettable moments. Highly recommended for any old-school blues fan, fan of blues guitar, or even the newcomer navigating their way through the history of the genre, Freddie King’s The Complete King Federal Singles is essential listening. (Real Gone Music, released February 26, 2013)