Archive Review: Albert King’s I’ll Play The Blues For You (1972) 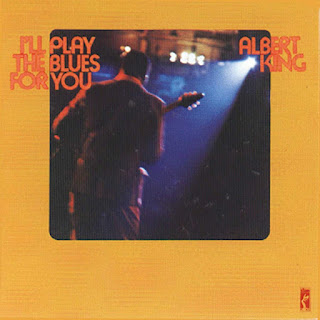 By 1972, Stax Records had seen its glory days come and gone, but there were still a few fires burning brightly at the legendary Memphis soul label. Among the artists keeping the doors open in the early 1970s were soul giant Isaac Hayes, R&B greats the Staple Singers, and extraordinary blues guitarist Albert King. Working in the studio with members of the Bar-Kays, including producer/keyboardist Allen Jones, as well as members of the Movement, Hayes’ backing band, King recorded I’ll Play the Blues For You, a masterful collection of blues-infused contemporary soul that nearly hit #11 on the R&B chart and inched nearly half-way up the top 200 albums chart.

Albert King’s I’ll Play The Blues For You

Back in 1972, “I’ll Play the Blues For You (Parts1 & 2)” was originally broken into two parts and released as the A and B sides of a 45rpm single. On album, the seven-minute performance is a smoldering, smooth-as-silk jam with plenty of King’s signature bent-string fretwork, an uncharacteristic but effective spoken-word interlude, and a slippery rhythmic groove that adds to the heat of the performance. Taken altogether, the song is like a hot, humid day in Memphis, its emotional underpinnings concealed just below the languid, steamy surface.

King recorded the Ann Peebles’ hit “Breaking Up Somebody’s Home” not long after the R&B diva had a massive chart hit with the song, but in the guitarist’s hands it becomes something else entirely. While Jones’ production doesn’t eschew the mournful soul roots of the original, King’s emotion-drenched vocals, his elegant fretwork, and the addition of Wayne Jackson and the Memphis Horns take the performance into heady territory. By contrast, “High Cost of Living” relies more on King’s screaming guitar notes and the explosive hornplay of Jackson and Andrew Love. King’s vocals wring every bit of romantic angst out of the lyrics, but it’s his razor-sharp blues licks that drive the performance.

Answer To The Laundromat Blues

King’s effective cover of the early Curtis Mayfield gem “I’ll Be Doggone” is dominated by the Memphis Horns, the guitarist’s voice lost beneath the brass and Jones’ chiming keyboards. King gets a few punches in, though, his flamethrower solos riding loud in the mix above drummer Willie Hall’s supporting percussion. King offers a sly reference to James Brown at three minutes in, before launching into a high-flying solo. King’s original “Answer To the Laundromat Blues” reprises his 1966 hit “Laundromat Blues” with fiery blues licks, spoken-sung lyrics that would have been controversial by today’s standards, and funky horns propelled by jazzy drumbeats. “Don’t Burn Down The Bridge (‘Cause You Might Wanna Come Back Across)” should have been a massive R&B hit, with King’s edgy vocals and edgier fretwork, a funky rhythmic crosscurrent, and scraps of energetic brass.

This expanded reissue of I’ll Play the Blues For You includes four previously-unreleased tracks, including alternate versions of the title track (sans the spoken interlude and with different horn charts) and “Don’t Burn Down the Bridge,” which benefits from a leaner, meaner arrangement that places more emphasis on King’s incendiary six-string pyrotechnics than on the horns, with bassist James Alexander’s funky steel-chain bass line establishing the song’s rhythmic foundation. That “I Need A Love” remained unreleased until now is a mystery, the song a bluesy, up-tempo R&B romp with precise guitarplay, gritty vocals, and well-timed blasts of sax. The instrumental “Albert’s Stomp” is a short, sharp shock of lightning guitar licks leveled against a thunderous backdrop that revolves around second guitarist Michael Toles’ swirling, psych-drenched rhythms and Jones’ spirited keyboard riffs.

Albert King’s eight-year tenure with Stax Records brought him a modicum of stardom and several R&B chart hits, helping to extend his career well into the 1980s. With I’ll Play The Blues For You, King delivered a bona fide classic of 1970s-era blues and soul music, a collection of inspired performances that have withstood the test of time.

For fans wondering if they should upgrade to this new reissue of an otherwise comfortable album, I’d offer a quick ‘yes!’ Aside from the clear-sounding digital remastering and four bonus tracks – two of which are engaging, entertaining new songs – the disc also includes music journalist Bill Dahl’s insightful and informative new liner notes. While reissue CDs too often just slap a new coat of paint on an old album, this modernized version of I’ll Play the Blues For You tunes up the engine and adds a little nitrous for that extra punch. What more could a blues fan ask for? (Stax Records, reissued May 22, 2012)

Buy the CD from Amazon.com: Albert King’s I’ll Play The Blues For You