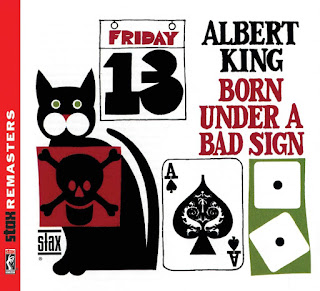 When blues guitarist Albert King signed with Stax Records in 1966, he was a known commodity on the blues circuit, but not yet a star, much less an artist with crossover potential. Based in St. Louis during the late 1950s and early ‘60s, King was a popular draw throughout the Midwest U.S. and had recorded sides for labels like King Records, Vee-Jay, Parrot Records, and others and had even released a full-length album, 1962’s The Big Blues, to little acclaim.

Working in the Stax Records studio in Memphis, Tennessee with the label’s house band, Booker T & the MG’s – keyboardist Booker T. Jones, guitarist Steve Cropper, bassist Donald “Duck” Dunn, and drummer Al Jackson, Jr. – along with Stax songwriter Isaac Hayes and Wayne Jackson and his Memphis Horns, King recorded a bunch of songs between March 1966 and November 1967 that would later comprise his Stax debut album, Born Under A Bad Sign. Widely considered as one of King’s career milestones, the album would bring the guitarist’s unique vision of the blues to a white rock ‘n’ roll audience and influence young musicians like Eric Clapton and Stevie Ray Vaughan.


The album starts out big and bold, the familiar strains of the title song kicking out the jams with reckless aplomb as King’s throaty vocals and equally vocal guitar licks moan their tale of woe. King takes a familiar blues theme – that of the luckless loser, the hapless gambler, the failed ladies man – and pumps it up with his stinging notes riding high above Steve Cropper’s tasteful rhythm guitar and Booker T. Jones’ background keyboards.  “Crosscut Saw” would be equally as audacious, the song’s jaunty rhythm bolstered by the rhythmic muscle provided by the Memphis Horns. King’s guitar playing here is just as grand as on the opening tune, if not more so, displaying more texture and a fluid grace, but the vocals are weak and sound washed out.

The frequently-covered Leiber/Stoller R&B classic “Kansas City” is provided an appropriately swinging arrangement, King sleep-walking his almost-spoken vocals atop a rich soundtrack dominated by the Memphis Horns and “Duck” Dunn’s gorgeous walking bass line. Again, whether due to problems with the original tape or the primitive recording technology, King’s voice unintentionally drops into the background at times, but his lively fretwork bursts above the mix nonetheless. King’s original “Down Don’t Bother Me” is an extension, of sorts, of the title track, pursuing a similar hard-luck lyrical tale, but the guitarist’s playing here is phenomenal, meshing perfectly with Perkins’ horns and Al Jackson’s sparse percussion to great effect. King’s vocals are better-balanced here, providing the right amount of emotion to match his anguished guitarplay.


King tackles the well-traveled Booker T. & the MGs’ composition “The Hunter,” which would later be covered by folks from Free to Koko Taylor, the guitarist adding a bit of bravado to his vocal performance. While the song’s double-and-triple-entendre lyrics are pretty frisky when left on their own, King’s deep voice and deeper blue guitar playing add gravitas to the recording. A cover of Ivory Joe Hunter’s “I Almost Lost My Mind” displays King’s versatility as a singer; his somber, heartbroken vocals bring a strong emotion to the words as his subtle guitar lines tell the rest of the story. “Laundromat Blues” is another gem in King’s catalog, a straight-forward blues-as-betrayal tune that channels the romantic woe into a fine vocal performance and tearful fretwork that sizzles with barely-contained rage and frustration.

The 2013 Stax Records reissue of Born Under A Bad Sign offers five bonus tracks in the form of previously-unreleased alternate takes and an untitled instrumental. The first (unused) take of the title track reveals a few differences but otherwise hits every mark as the take that ended up on the album; by contrast, the alternate take of “Crosscut Saw” includes an extra chorus tacked on the end, features a stronger King vocal performance, and all the houserockin’ guitar banging of the original. The bonus version of “The Hunter” also seems more muscular and self-assured, but the album-closing “Untitled Instrumental” is a revelation, King laying the smackdown on a fatback rhythmic groove, the soulful Memphis horns slung low beneath the guitarist’s raging leads, which run amok across the loose-knit studio jam.


My colleague Bill Dahl sums it up best in his new liner notes for Born Under A Bad Sign, stating that King would “make more great Stax albums, but he’d never top this one.” King’s performances here are those of a hungry man ready to feast on the world, and they would create an artistic blueprint that the guitarist would hew closely to for the remainder of his career. Although the digital re-mastering provided this 2013 reissue hasn’t cleaned up all of the original audio issues, it has brightened the performances and added extra depth to the sound.

The songs themselves – “Born Under A Bad Sign,” “Crosscut Saw,” “The Hunter,” “Personal Manager,” and “Laundromat Blues,” the album’s first hit single – would become part of King’s canon, superb performances that influenced a generation of blues and blues-rock guitarists to follow. A bona fide classic of electric blues, if you don’t have a copy of King’s Born Under A Bad Sign in your collection, then you don’t have squat! (Stax Records, reissued April 2, 2013)

Buy the CD from Amazon.com: Albert King’s Born Under A Bad Sign