Archive Review: Tommy Castro & the Painkillers' The Devil You Know (2014) 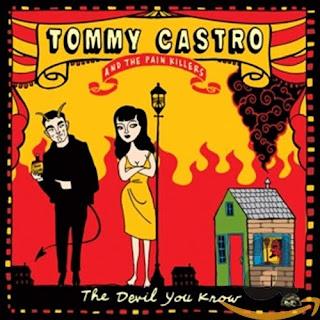 At this point in time, bluesman Tommy Castro is pretty much a familiar face, as big a superstar one can be in the blues genre for anyone not named "Waters," "Wolf," "Walter," or "Guy." Some 20 years after the release of his debut album, with twelve studio and live recordings to his name; with half a dozen Blues Music Awards earned on a dozen nominations, including two "B.B. King Entertainer of the Year" honors, if you're a blues fan and you don't know Castro by now, the only question that remains is what rock you've been living under the past couple of decades.

That's not to say that Castro is a dinosaur or deaf to changes in the genre that he's helped define over the years. Neither is Castro immune to trends – cultural and economic – and while there was some minor carping a year or so ago when he broke up his long-running Tommy Castro Band to assemble a leaner and meaner outfit in the Painkillers, the new band is OK by me. With a TCB holdover in bassist Randy McDonald, Castro added keyboardist James Pace and drummer Byron Cage and was with these Painkillers that he went into the studio to record The Devil You Know. A welcome change of pace,  the new album retains all the stuff that fans loved about Castro and mixes it up with a fresh, stripped-down sound that is raw, rockin', and more immediate than the BMA winning Hard Believer album, which was released five years and a virtual lifetime ago.

Tommy Castro & the Painkillers' The Devil You Know


The title track of The Devil You Know is indicative of Castro's new direction, which isn't all that much different from his old direction – just dirtier, nastier, and bluesier with no horns and a distinct Delta groove running like the Mississippi River beneath the arrangement. Castro's rattletrap guitar scrapes and swoons in the heat of the performance, the band crashing and clashing behind its frontman in making a glorious, rhythmic noise. Castro's slight electronically-altered vocals are befitting the lyrics, adding a bit of chaos to the affair, a discomforting disconnect bolstered by his screaming, razor-sharp guitar solos and blustery vocals.

Castro changes directions on a dime with "Second Wind," a funky, West Coast R&B inflected romp that reminds of 1960s-era Cali bands like Sons of Champlin mixed with Southern blues-eyed soul revues like Delaney & Bonnie & Friends. The song's vigorous percussion hints at an exotic, Latin-flavored rhythm while Castro's slippery vocals and lively fretwork dance atop the song's deep groove. A cover of former Savoy Brown frontman Chris Youlden's "I'm Tired" is a rhythmic blues-rocker notable mostly for guest picker Joe Bonamassa's riptide guitar licks, Castro's forceful, gruff vocals, and the amazing guitar interplay between the two talents. The song itself was nothing special until these two forces of nature laid a little grease in the grooves, turning it into a bona fide barn burner…

When I Cross The Mississippi


A cover of Chicago blues legend J.B. Lenoir's "The Whale Have Swallowed Me" builds upon what was great about the original – the song's imaginative lyrics, its spry foot-shuffling groove, languid guitarplay – by adding a heaping helping of James Pace's tinkling ivories, Tasha Taylor's vocals (which compliment Castro's grittier tones), and Castro's taut guitar licks. This is the sort of big-boned R&B romp that the Tedeschi Trucks Band has build its rep on, and Tommy and Tasha knock it out of the park with glee.

"When I Cross The Mississippi" is a curious hybrid, some of the song's blusier elements a throwback to early 1970s sounds while dancing partner Tab Benoit brings his guitar and a contemporary Louisiana R&B feel to the tune. The chemistry between Benoit and Castro is heightened by Mike Finnigan's chiming keyboards and drummer Byron Cage's relentless big-beat timekeeping. Now that Castro has everybody warmed up and ready to roll, we rock right into "Mojo Hannah," a greasy garage-blues number with a New Orleans vibe written by Andre Williams. Joined by the great Marcia Ball on vocals and piano, Castro and his Legendary Rhythm & Blues Revue bandmate raise the roof with an energetic, fun, and raucous take on the song that crackles with electricity.


Castro's original "Two Steps Forward" is a thunderstorm blues-rocker that would have been right at home in the late 1960s British blues boom. A monster riff leads into Castro's bellowing vocals, the song suddenly breaking into a too-cool-for-school soul party with the Holmes Brothers adding righteous backing vocals and Magic Dick channeling the spirits of Little Walter and Sonny Boy Williamson with his quicksilver harp runs. Castro gets into a bit of the supernatural himself with "She Wanted To Give It To Me," his soaring solos blasting from your speakers like zombie Hendrix, his vocal gymnastics matched by a stomping, stammering rhythm that joyfully bludgeons your ears from the first note.

An inspired cover of Wet Willie's 1970s-era Southern rock classic "Keep On Smilin'" is spot-on; the band laying down a soulful bedrock for Castro's fine vocals with Mike Duke's subtle keyboard flourishes riding low beneath the well-oiled rhythms. Castro's guitarwork doesn't get to shine until around three-minutes in, when his solo intertwines with guest guitarist Mark Karan to recreate a beautiful twin-guitar sound reminiscent of Duane Allman and Dickey Betts. Castro's voice takes a backseat altogether on "Medicine Woman," the talented Ms. Samantha Fish taking the lead here and imbuing the song with an incredible energy and vitality. As good a guitarist as Fish is – and it would have been good to hear her play here – as a singer she simply sets the song on fire as her vocals fly high above Castro's flamethrower git licks, Pace's tasty keyboards, and the hypnotic, syncopated rhythms. All the song's elements combine to create a bit of real musical magic.


The Devil You Know is Tommy Castro as you've never heard him before, two decades of hard-won experience and thousands of miles of roadwork combined in the creation of a career-defining work. As a producer, Castro proves to have a deft hand on the controls, The Devil You Know showcasing his frequently-underrated vocals and definitely overlooked six-string skills. If you're familiar with Castro, you may want to give him another listen, and if you're a blues newcomer, The Devil You Know is an entertaining, highly-rocking introduction to the charms, charisma, and talents of Tommy Castro. (Alligator Records, released January 21, 2014)

Buy the CD from Amazon.com: Tommy Castro & the Painkillers' The Devil You Know