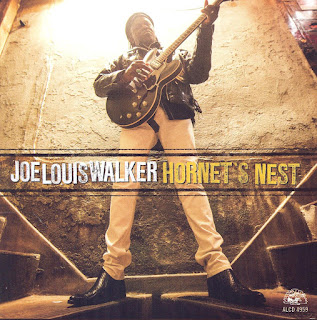 With the vast majority of musicians, by the time they get a couple of decades under their belt and two dozen albums into a career – if they're talented, driven, and lucky enough to get that far – the artist begins to run out of gas, creatively, struggling to find their muse. As for blues guitarist Joe Louis Walker, not only is he finding new ways of expressing himself nearly 30 years after the release of his debut album, both lyrically and musically Hornet's Nest sounds like Walker has a full tank of gas and he's ready to roll!

Following up on his acclaimed 2012 album Hellfire, Walker returned to Nashville, the new blues Mecca, to once again record with talented producer, musician, and songwriter Tom Hambridge (Buddy Guy, James Cotton). Working with the same firecracker studio band that helped make Hellfire such an unqualified success – guitarist Rob McNelley, bassist Tommy MacDonald, and keyboardist Reese Wynans, with Hambridge on drums – Walker spanks the amps on a dozen rock-solid performances, including nine original songs that run the gamut from old-school blues to British blues-rock, and even a fine gospel moment.


Much as he did with Hellfire, Walker cranks up the voltage from the first note, opening the album with the title track, as greasy and satisfying a slab o' blues back-bacon that will ever tickle your musical palate. Stinging fretwork and bombastic rhythms lay the foundation for a blistering performance. The song is, at its core, a fresh take on the old blues trope of love and jealously, only writ large with monster riffs and heavy instrumentation. Walker and his co-writers spin some clever metaphors within their lyrics, but what really makes it work are Walker's nasty vocals and nastier git-licks, as brutal an assault on the blues as you'll hear, full of spit and venom and raw emotion. It's a real kick-in-the-pants-seat of an album opener, so what's an artist to do for an encore?

How about "All I Wanted To Do," a complete change of direction stylistically and every bit as appealing to the ears as the title track. More pop-oriented in tone, Walker's brightly-hued vocals are no less imbued with emotion, the singer channeling heartbreak here rather than anger, his vox crossing Prince with Bobby "Blue" Bland to great effect, embellishing the lyrics with a melodic guitar solo full of tone and imagination that rides smoothly atop the rollicking brassy licks of the horn section. "As The Sun Goes Down" changes the mood once again; a more traditional, mid-tempo blues tune with a few swampy licks thrown in for good measure, Walker's tear-jerk vocals are enhanced by the crying notes he coaxes out of his instrument. Every bit of the song's power comes from the mournful fretwork, Walker wringing as much blood, sweat, and tears out of his stick as any great blues guitarist you'd care to name.


Walker's ear for fresh music is simply invigorating, and he puts it to good use on a playful cover of Carl Perkins' "Don't Let Go." A Top 20 hit for the great Isaac Hayes back in 1980, Walker's version straddles the common ground between Perkins' rockabilly-tinged original and Hayes funkier R&B cover. The swinging rockabilly rhythm is evident here, and Walker's surprisingly spry vocals capture perfectly Perkins' swagger and charisma, but he dirties it up a bit with an undeniable R&B groove driven by Wynans' chiming keyboards and inspired backing vocals. Hambridge's "Ramblin' Soul" is an entirely different creature, a big-boned blues-rock monolith that wouldn't have sounded out of place on an old Savoy Brown album. Walker's razor-sharp guitar cuts a wide swath through the arrangement while the stomp 'n' stammer rhythms hit your ears like a mortar blast. The song jams on for nearly six minutes, guitars screaming and cymbals crashing in the creation of a musically cathartic moment.

Following "Ramblin' Soul," Walker's take on the Rolling Stones "Ride On, Baby" is so doggone full of enchantment and wide-eyed innocence that it's just a pure joy to listen to over and over again. Digging the often-overlooked Jagger/Richards composition up from 1967's Flowers album, Walker dusts off the psychedelic-pop sheen yet still retains the song's mid-1960s baroque Stones sound. It's an uplifting moment devoid of guitar pyrotechnics and studio gimmickry, just a heck of a lot of fun to hear and, I presume, to have recorded in the first place, especially the cheeky Otis Day & the Knights outro.

Ditto for the raucous "Soul City, which evinces a stone cold Sly & the Family Stone vibe while name-checking various locales like Chicago, Detroit, and even Oslo, Norway, among others. The song is built on a descending bass riff like a vintage Sly Stone jam, with plenty of chaotic instrumentation and swirling guitars building a lively soul party. Hornet's Nest closes out with the gospel-tinged "Keep The Faith," Walker's reverent vocals displaying a different side to his talents, the singer sounding a lot like Bobby Womack in delivering an incredibly powerful yet nuanced performance that harkens back to his years with the Spiritual Corinthians Gospel Quartet during the 1980s. The song is an inspiring nod to the artist's faith as well as an elegant note to close the album out on.


Joe Louis Walker has been playing professionally since he was a teenager, nearly 50 years now, and he's literally shared a stage and rubbed shoulders with nearly every American and British blues musician of note, from John Lee Hooker and John Mayall to Muddy Waters, Jimi Hendrix, and Michael Bloomfield. Few would blame Walker if he wanted to call in a few of his markers and coast on his accomplishments. Hornet's Nest shows that there's plenty of life left in the fiery bluesman yet, Walker not one to rest on his laurels when there's music to be made. Hornet's Nest is the guitarist's strongest, diverse, and most entertaining album to date and, after a couple dozen acclaimed previous efforts, that's no mere hyperbole... (Alligator Records, released February 23, 2014)