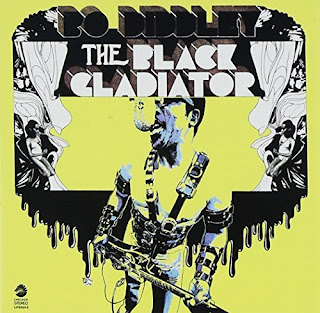 By the late 1960s, Bo Diddley wasn’t the musical force that he’d been almost a decade previous when cuts like “Road Runner” and “You Can’t Judge A Book By Its Cover” were burning up the R&B world even while they also inched onto the pop charts. Even worse, Diddley-influenced acolytes like the Rolling Stones, Jimi Hendrix, and Eric Clapton had become the new rock ‘n’ roll royalty, leaving Bo as a respected elder statesman and the architect of a revolution that he seemingly no longer had a role in shaping.

As a result, Diddley would turn back to his blues roots, recording a pair of albums with other Chess labelmates that re-purposed several of his rhythm-heavy hits with bluesier performances – 1967’s Super Blues, with Muddy Waters and Little Walter, and 1968’s The Super Super Blues Band, with Waters and Howlin’ Wolf. Neither of these albums did much to revive the flagging careers of the various participants and, in 1969, the unexpected happened when Leonard Chess, the patriarch of the Chess Records family, passed away. The label had already been sold to a company that had little or no idea what to do with its legendary catalog of music, or its rich stable of artists, further marginalizing Diddley’s career.


When he entered Chicago’s Ter-Mar Studios in January 1970, the mighty Bo was faced with a daunting task – recording a follow-up to his last solo album, 1965’s 500% More Man. Black music hadn’t been standing still as Diddley was singing the blues with his fellow Chess label colleagues, and the popularity of both blues music and the sort of raucous, houserockin’ R&B that Diddley pioneered had been surpassed with young African-American listeners by the groove-laden funk of Sly & the Family Stone and the Parliament-Funkadelic empire. Similar to what had been done with Muddy Waters and Howlin’ Wolf in attempting to re-mold the old-school bluesmen as psychedelic-blues artists, The Black Gladiator saw Bo Diddley staking his claim as a funkateer in the new decade.

Disregarded by critics at the time, Diddley’s The Black Gladiator was a bold attempt at contemporary legitimacy by the often-misunderstood artist. Unlike Waters’ similarly-dismissed Electric Mud album, or even the Wolf’s This Is Howlin’ Wolf’s New Album, both of which tried to force the bluesmen into a stylistic straitjacket against their will, Diddley seemed to be a willing traveler on this particular musical sojourn. Working with a crew that included such long-time Diddley musical foils as bassist Chester Lindsey and drummer Clifton James, keyboardist Bobby Alexis was the lone new ingredient for this fresh musical direction, and his over-the-top key-pounding would often vie with, and push Diddley’s guitar-playing to new heights.

To be honest, The Black Gladiator is neither as bad as 1970s-era critics would claim, nor as seminal as the album’s newfound 21st century admirers would have you believe. It didn’t take a major leap of imagination to take Diddley’s rhythmic trademarks and stretch them out in the creation of a deeper, fatter groove, as the band does with the album-opening “Elephant Man.” Seemingly drowning in a sea of sound, the rhythm section builds a foundation on top of which Diddley sings/shouts his often-bodacious lyrics above his stinging guitar licks and Alexis’s chiming keyboards. The song evinces a slick groove and an undeniable anarchic spirit, and Diddley’s fretwork is truly inspired. The album’s lone throwback, “You, Bo Diddley,” is the sort of self-aggrandizing rap that Diddley made his reputation with, but while it sports a semi-modified Bo Diddley beat and energetic backing vocals, it’s at best a pale imitation of similar early 1960s performances.


Much better is the fluid, funky “Black Soul,” which pairs raw production with a more assured Diddley vocal, Alexis’s livewire keyboard riffs, and a groove deep enough to drive a semi-truck through. Diddley’s wiry chicken-picking is supported by solid rhythm playing from an unknown second guitarist (thought to be his nephew, Ricky Jolivet a/k/a Bo Diddley Jr.). The muscular “Power House” offers the best of both worlds, welding a slowed-down version of the familiar swaggering Diddley beat with a fine, boastful vocal turn, scorching fretwork, and a swinging rhythm.

“I’ve Got A Feeling” opened the original vinyl album’s second side with an infectious funk that rivaled Sly Stone, the slightly-echoed production style providing a more immediate sound. Alexis’s often-discordant keys are part of the bass-drums cacophony upon which Bo embroiders some imaginative guitar lines as the vocals of backing singer Cooke Vee (Cornelia Redmond) were multi-tracked to create a “girl group” sound on a budget, an effective technique. The slow-burning “Hot Buttered Blues” is Bo’s lone nod towards the blues music he cut his teeth on, a loping groove rolling throughout the song as Bo ladles on some fine guitar in this ode to the Chicago blues scene.

Another of the album’s long-lost gems is “Funky Fly,” a blues-rock-funk hybrid with a greasy Mississippi Delta groove, a mesmerizing circular guitar riff that is often echoed by the keyboards, a jackhammer rhythm, and nonsensical shouts and noises that punctuate the song’s deadly instrument jamming. By contrast, “I Don’t Like You” is an odd bird, indeed, Diddley’s vocals mimicking an operatic aria, sounding like a cross between Bugs Bunny and Pavarotti. At the heart of the song is a game of “the numbers” as Bo and a second, higher-pitched voice hurl insults at each other above a slippery groove and choogling keyboards. The effect is disconcerting and absurd even for Diddley, who was certainly no stranger to musical flights of fancy.


It’s safe to say that you’ve never heard Bo Diddley quite like this before! Out of the ten tracks on The Black Gladiator, six are fully-satisfying performances that display Bo’s larger than life personality and often-underrated musical skills, as well as the talents of his top-notch backing band. A couple of the songs here are merely so-so, passable but more filler-like in quality, and a couple of these tunes will chafe your eardrums.

It’s interesting to note that after releasing this album, Diddley would abandon his funk muse in an attempt to re-make himself as a contemporary songster with 1971’s Another Dimension album before finally returning to the blues, soul, and R&B on which his legacy was built. Overall, in re-considering The Black Gladiator, I’d give the album a B- for sheer chutzpah and a handful of innovative musical ideas. It’s not the Bo of lore, but it ain’t half-bad, either... (Light In The Attic Records, reissued 2012)

Buy the CD from Amazon.com: Bo Diddley's The Black Gladiator